All that you need to read before picking your Fantain XI for Mumbai vs Hyderabad.

Hyderabad’s comeback trail after their loss in the opener against Kolkata could be a cause of worry for the Mumbai team positioned sixth in the points table, when the two teams face off each other for Indian T20 league game no 19 at the Rajiv Gandhi Stadium here on Saturday. Hyderabad have won three matches on a trot, while Mumbai are slowly improving with two wins in four games. Here’s all you need to keep in mind for both the teams before making your Fantain XI for Mumbai vs Hyderabad.

Mumbai are likely to reintroduce young spinner Mayank Markande in the playing XI, as the pitch at the Rajiv Gandhi International Stadium is spin friendly.

After winning three games on a trot, there is no reason for Hyderabad to fiddle with their playing XI, though their middle-order is yet to perform up to expectations.

The opener is in the form of his life after returning from a one-year ban for ball tampering. In four matches, he has scored 85, 69, 100* and 10 runs respectively and is the costliest fantasy player for Hyderabad games. He has an even better average at the Hyderabad ground, and will look to demolish Jasprit Bumrah and co.

A knock of 48 runs against Delhi, before which he scored 114 runs against Bangalore, the England batsman is complementing Warner very well at the top. The two openers have ensured that Hyderabad’s weak middle order does not get exposed. Bairstow should be your top pick on Fantain Fantasy XI.

The Afghanistan spinner has six wickets in the two games, and is performing even better than his national and Hyderabad teammate Rashid Khan, who often steals the show. The pitch in Hyderabad favours spinners, and if you are to go by form, then Nabi should be picked ahead of Rashidyou’re your Fantain XI.

Both the Pandya brothers should be in ur Fantain XI for the kind of form that they were in their previous outing against Chennai at the Wankhede stadium. The duo were oozing confidence which they would like to carry to Hyderabad.

Jasprit Bumrah and death overs is more like to love story made in heaven. The two perfectly complement each other in nearly every game, and can win you crucial points in your fantasy game. 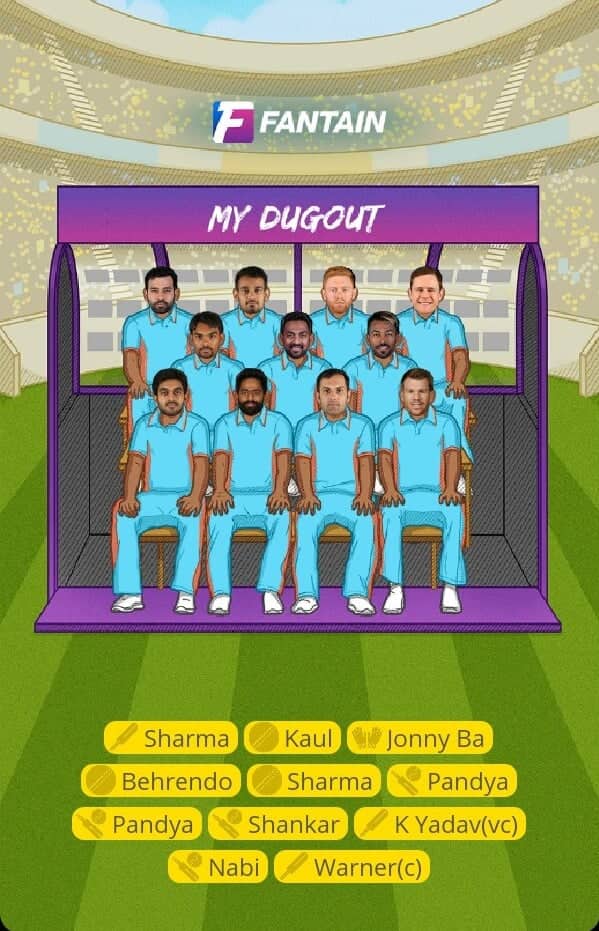