Who will win the battle this time?

A few days ago, when both these teams clashed at the Feroz Shah Kotla, they produced an enthralling tie – the first and only one so far this season – which was eventually broken in the Super Over where Delhi prevailed courtesy Kagiso Rabada’s outstanding over. Since then, Delhi have lost a bit of momentum as they suffered back-to-back losses before a comprehensive win over Bangalore.

With 4 days off since their last game, Delhi will be rejuvenated and ready to take on Kolkata, who suffered an embarrassing loss against Chennai in their previous clash, at the Eden Gardens on Friday.

If both teams stick to the theme of oscillating fortunes like in their previous clash, expect another humdinger. Delhi have won only once while playing at the Eden Gardens that too way back in 2012, a fact Delhi fans might not want to pay much attention to.

Fantasy team-wise, if we go by Kolkata’s record in the last few years, it will be advisable to stack up your team with the home team’s spinners; although they haven’t quite hit their straps yet. But Kolkata have only played 2 out of 6 games this year at home, winning both and since then, their spinners have bowled better. With the young guns of Delhi performing well with the bat, Shikhar Dhawan might follow suit soon.

Injury Updates: No injury concerns in both teams. However, according to the sources, Delhi might replace 2 members of their squad with domestic cricketers.

Captain: Despite not having the best of techniques, especially against spin, Russell hit a breezy 50* off 44 when everyone else struggled against the menacing Chennai spinners in the last game. Such has been Russell’s form that he has struck gold in every single outing this year which has seen his average swell to 128.50 after scoring 257 runs this year. His strike rate of 212.39 still stands the best for anyone who has scored more than 25 runs this year.

Vice-Captain: Kagiso Rabada has stayed true to his reputation of being a wicket-taker even in the shortest format of the game. With 11 sticks from 6 games, Rabada is currently the holder of the purple cap and looks good to retain it for longer. His ability to execute the yorker at will makes him indispensable for any captain in the tournament. 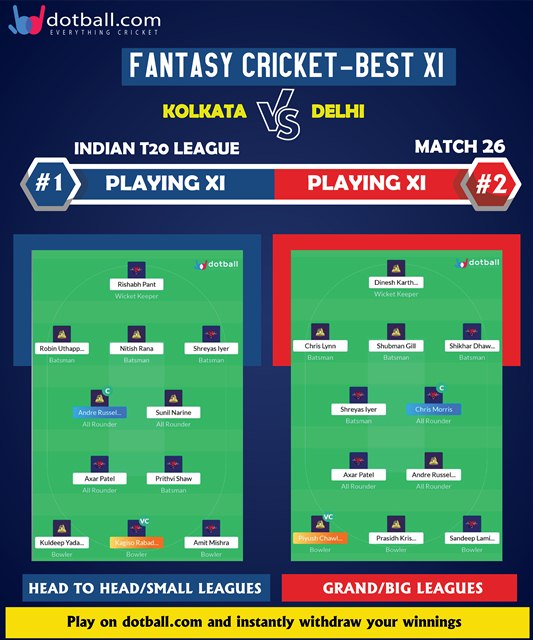 Captain: With 62 sticks from 56 IPL games and an average and strike rate in the north of 30 and 160 respectively with the bat, Chris Morris has made a reputation of being a dangerous allrounder in the IPL. The big allrounder has impressed with the ball (6 wickets from 4 games, Econ 7.93) this year and has the potential to do the job with the bat.

Vice-Captain: Considering that Piyush Chawla is used during the Powerplay on a regular basis, an IPL-career economy rate of 7.7 is not bad at all. While doing so, he has also snapped 144 wickets at 26.64 runs apiece. He has always enjoyed bowling at the Eden Gardens and could go on to stifle batsmen with his smart variations.

Keep an eye out on Prasidh Krishna, who has bowled exceptionally well at the start and at the death but without much luck. With the deck expected to assist the spinners, Axar Patel and Sandeep Lamicchane can make an impact for Delhi.

Both of Nitish Rana’s fifties this year came at the Eden Gardens. He is a good player of spin and can replicate the success again against Delhi. Uthappa has been very consistent this year and has averaged 45.75 – his highest after playing out 12 seasons in the IPL for various franchises. 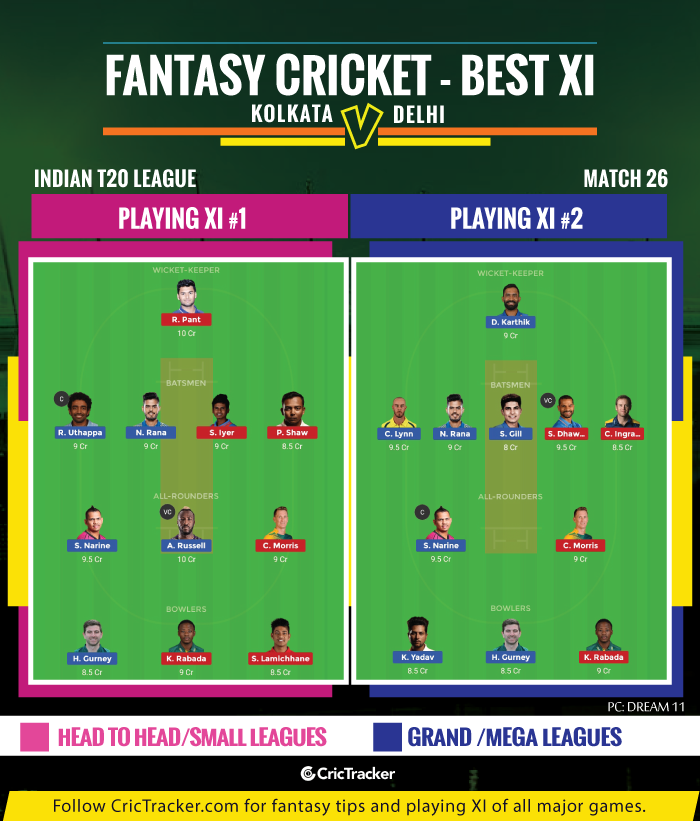 It took Colin Ingram 8 years to make a comeback in the IPL and the South African has already impressed on the big stage. Going by his cameos, a telling knock is just round the corner. Shubhman Gill might be given a promotion to showcase his talent.