Rohit Sharma is set to play this match.

Think of Mumbai right now and the first name that will spring to your mind will be Kieron Pollard. The big West Indian clobbered the Punjab bowlers on his way to a thunderous 31-ball 83 to take Mumbai to a magical win and propelled them in the top 4 on the points table. On the other hand, Rajasthan ran Chennai close yet again but, just like they couldn’t close out the game in the away leg, failed to cross over the line which kept them at the 7th position with 5 losses in 6 games. They will now travel to Mumbai to take on Rohit Sharma’s team in a day game at the Wankhede on Saturday.

If you are sitting down to pick a fantasy team, Mumbai’s misfiring top order is likely to start delivering. Or will they be kept in check by Rajasthan’s bowling unit, which showed a lot of heart in defending an average total against table-toppers Chennai? Going by the quality Mumbai possess, it is likely that their batsmen – Rohit, de Kock and Ishan Kishan – might get going especially since they are playing at home. You will be a novice if you don’t pick a certain Pollard in your side. His contest against Jofra Archer will be a delight to watch.

Injury Updates: After taking a break in the previous game, Rohit is expected to return to the side.

Captain: Hardik Pandya has performed reasonably well with both bat and ball and is expected to continue his form. With 6 wickets in 6 games and 121 runs @ 30.25 with a strike rate of 172.85 is one of the leading allrounders in the tournament this year. Pandya raises the bar whenever Mumbai play at home.

Vice-Captain: Buttler has looked in sublime touch and looks like getting runs almost every game. He got off to a flier, getting a 10-ball 23 in the previous game but couldn’t convert it into a substantial knock. With Rajasthan’s back against the wall, Buttler must take responsibility and turn the fortunes of his team

Sanju Samson is almost averaging 50 this year and could be the force Rajasthan needs in the middle overs. After a couple of middling seasons, Pollard has turned the clock back and has found his range this season.

Captain: Krunal has not only gives Mumbai utility but also adds balance to their XI. Although he hasn’t bowled his full quota of overs in every game but Mumbai have often promoted him to bat up the order where he can be very dangerous. A strike rate of 145 after scoring 1129 runs in T20s show his potential with the bat in hand.

Vice-Captain: Steve Smith has been consistent this year – averaging 43.50 after 6 games – but he must work on his scoring rate as he is striking at only 110.12 this season. The Australian is the perfect candidate to play the sheet anchor’s role and must look to step on the gas towards the end of the innings.

Ben Stokes will have a point to prove after failing to defend 17 in the final over. Rahul Chahar has bowled phenomenally and is likely to continue his form against Rajasthan. Going by his recent white-ball form, de Kock hasn’t lived up to the expectations this year. But he is too good a player to miss out for too long. 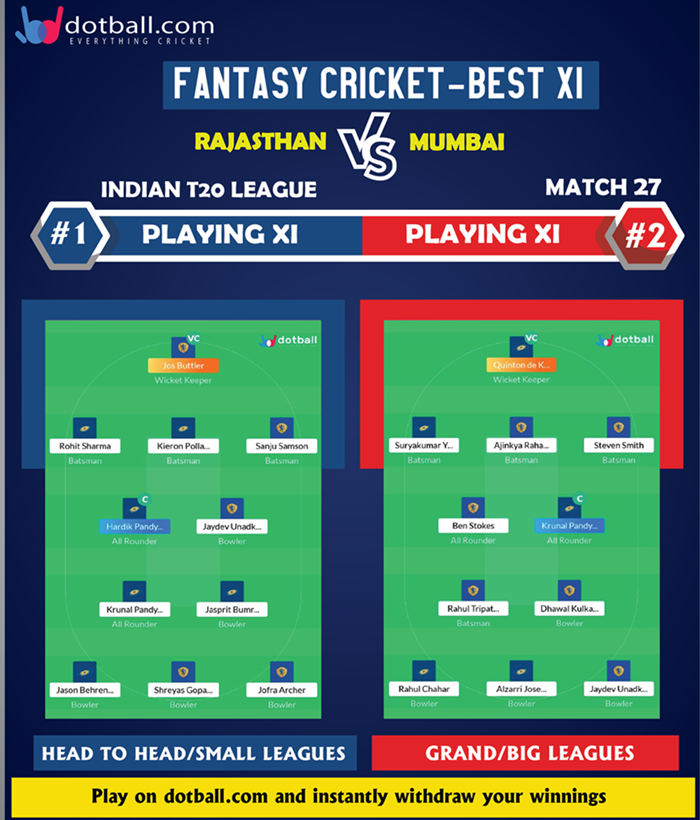 The evening breeze at the Wankhede might help Behrendorff slant the ball across right-hander. He will be up against India’s Test vice-captain Rahane, who hasn’t gotten into any rhythm so far. Rahane will be under pressure but has been known to deliver when the chips are down.

Cricket is a great leveller and Alzarri Joseph must have already realised it as he was taken to the cleaners by Punjab after a fairytale debut against Hyderabad. But the lanky fast bowler has enough skills to make a telling comeback. Tripathi has looked in extremely good touch this year but hasn’t got the performances to show for it. The 28-year-old seems to be on the verge of scoring runs sooner rather than later.