Will the break work wonders for Kohli and his men?

Just when Punjab wanted to extend their domination in the ongoing IPL, they were stunned by Kieron Pollard. Had they won this pendulum-swinging contest, which they looked like until the final ball of the game, they would have been sitting pretty at the No. 2 spot. Despite that shock loss, 4 wins from 7 games have helped them stay at the 4th position in the table.

They will play against a winless Bangalore side who have enjoyed a week off which must have helped them in regrouping. Can Kohli’s team turn a corner and end their run of defeats against a formidable Punjab side at Mohali on Saturday? Never say never in T20 cricket.

With the likes of Kohli, Rahul, de Villiers and Miller participating in this game, users will have a tough time picking and choosing from these stars for their fantasy teams. The Mohali track, however, hasn’t seen teams erect tall totals this year and it will be advisable to give priority to the faster men as they have picked 58.33% of the wickets that have fallen at Mohali this year.

Because the conditions are conducive for the quick bowlers, Bangalore’s underfiring pace-battery might as well have a better day in the office.

Injury Updates: Chris Gayle had twisted his back but might recover in time to participate in this clash. Ankit Rajpoot also injured his finger during the previous game and may miss out.

Captain: KL Rahul recovered from a tricky few months and has batted extremely well. After 7 games, Rahul is only 32 runs adrift from becoming the leading run-getter this year. In 7 outings, the 26-year-old has 317 runs at an impressive average of 79.25 while striking at 131.53. He is fresh from an unbeaten maiden IPL ton and will look to carry the momentum ahead.

Vice-Captain: Stoinis has added finishing touches to Bangalore’s innings and can also be a handy customer with the ball. The Australian all-rounder has only been dismissed once this year and can use the long handle to good effect.

Navdeep Saini has turned the heat on the batsmen by soaring the speedometer in the north of 145 on a consistent basis. Chahal looks very likely to continue his sizzling form with the ball.

Captain: While Gayle might not make big scores on a regular basis but still is good enough to play crisp cameos and provide flying starts to Punjab. His average of 37.16 is just shy of his IPL career average of 40.94 but a strike rate of 158.15 is a notch higher than his career’s 151. The Mumbai bowlers will have a tough time restricting the Jamaican star if he gets going.

Vice-Captain: Bangalore haven’t utilised Moeen Ali so far this year. In 6 games, the Englishman has delivered only 13 overs despite maintaining a good economy rate of 7.46. Kohli could play a gamble against Gayle, who tends to be a slow starter against spin. As far as batting form is concerned, Ali has struck the ball well in the limited chances presented to him.

After two tough outings, Southee will be keen to make amends and bring his international experience to the fore. Hardus Viljoen has the ability to hurry batsmen and has performed reasonably well for his franchise this year. He will love bowling at the Mohali surface which provides assistance to the faster men. 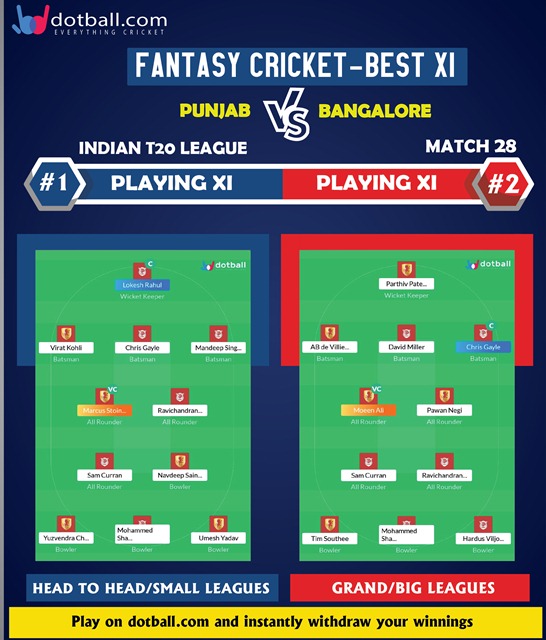 Suggested Playing XI No. 1 for Head to Head/Small Leagues:

After his exploits for the Test team, Agarwal is utilising that experience and form in the IPL. He is averaging 30.66 this year which is by far the most he has ever done in a season. Pawan Negi might be an X-factor for Kohli during the middle overs.

Miller will look to step up and is the ideal candidate to provide impetus during the death. It will be another stern test for Ravi Ashwin but the offspinner has a lot of tricks in his bag to fox batsmen. Expect another high-scoring thriller which might very well go down the wire. 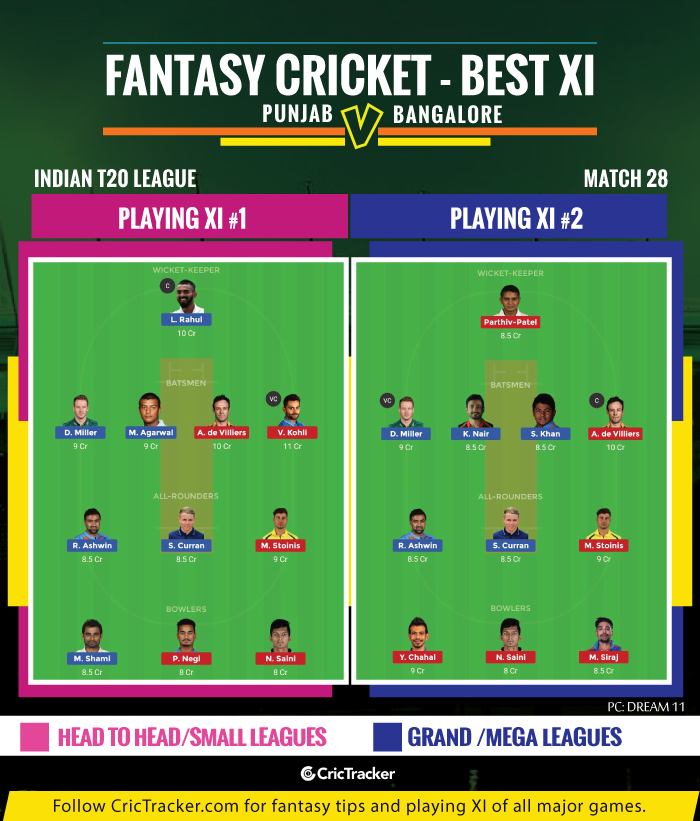