All that you need to read before picking your Fantain XI for Kolkata vs Chennai.

The top two teams on the points table will take on each other in the match no 29 of Indian T20 league 2019. While hosts Kolkata are currently placed on the second position on the points table, their bowling has been very dismal in this season. Chennai, on the other hand, have a balanced squad, with both their batting and bowling departments very strong. The MS Dhoni-led side has lost only one game so far and will be looking to maintain the numero uno position when they face off Kolkata at the Eden Gardens. Here is all you need to know for both the teams before picking your Fantain XI for Kolkata vs Chennai.

Kolkata’s regular openers – Chris Lynn and Sunil Narine – did not play the previous game. While Lynn is down with flu, Narine has a finger injury. There is no update on their availability for the Chennai game.

MS Dhoni is one of those captains who rarely changes his playing XI, and there is no reason why he should fiddle with a combination that has been continuously winning matches this season.

MS Dhoni – Dhoni, along with Ambati Rayudu, spearheaded Chennai’s chase in their last game. The batsman is in good form this season, and has played a lot of club cricket in Kolkata during his school days, which is why he can come good on this pitch. Dhoni is a must on your Fantain XI and a good choice for your captain as well.

Deepak Chahar – The fast bowler has been one of Dhoni’s trump cards this season. It will be interesting to see if he can pull off Andre Russell’s wicket.

Andre Russell – If there is one batsman who is being feared by all bowlers, it is Kolkata’s, Andre Russell. He has been the team’s best batsman in all their five games so far and will be looking to come good on a day when Kolkata essentially need to win a game to remain on top 2.

Shubman Gill – The young batsman was promoted as an opener in Kolkata’s previous game against Delhi, and he delivered with a half-century, though in a losing cause. Gill is likely to open against Chennai as well if Lynn and Narine are still unavailable.

Imran Tahir – The South African bowler has been in good form this season and will be looking to make the most of a spin-friendly Kolkata wicket. 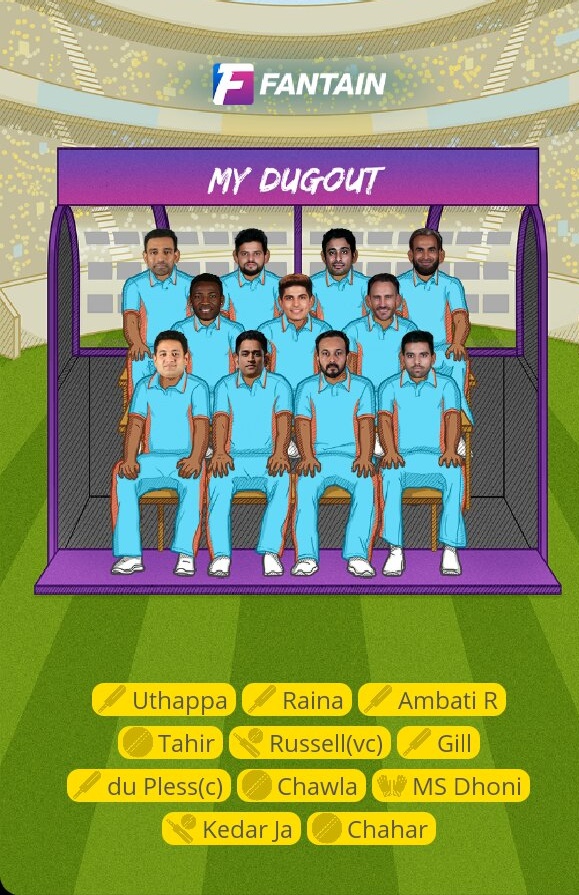