Delhi are high on confidence after winning back-to-back matches.

After a rousing start, Hyderabad’s campaign has taken a plunge. From winning 3 out of 4 games, Hyderabad faced consecutive losses and slipped to the sixth spot on the points table. They will be keen to get back to winning ways when they face Delhi at the Rajiv Gandhi Stadium in Hyderabad on Sunday. Just when things were going downhill, Delhi have resurrected their campaign by winning comprehensively against Bangalore and Kolkata to enter in the top 4 of the points table. This will be a critical contest for both sides since teams will want to consolidate their position in the table to avoid leaving too much to do in the latter stages of the league.

David Warner still leads the batting charts of the tournament despite Hyderabad enjoying a 6-day break. The Australian has struck the ball beautifully since the first game and looks good to carry that form into the business end of the tournament. His partner, Johnny Bairstow, is not too far behind and has been very consistent. The Delhi bowlers will look to attack the Hyderabad openers and get into their middle order who have looked very rusty. Both teams are neck-and-neck in terms of resources. Delhi has momentum on their side which gives them the edge but Hyderabad have the home advantage.

Captain: Warner has looked like a man on a mission this year. His hunger and desire to perform on a big stage after missing a full season of cricket has helped his cause as well. 349 runs @ 87.25 with a blazing strike rate of 146.63 speak volumes about his form and intent which has brought Hyderabad reasonable success this year.

Vice-Captain: Fresh from a career-best T20 score of 97* which brought an end to a series of middling scores, Shikhar Dhawan is not the one to waste good form. The left-hander enjoys facing quick bowlers and Delhi have plenty of them in the form of Morris, Ishant and Rabada.

Rashid Khan has bowled extremely well but hasn’t picked many wickets. A big performance seems to be on the cards for the Afghan national. Shankar has struck the ball sweetly and looks likely to produce a big performance.

Captain: No quick bowler has bowled faster and more consistently than Rabada this year. The South African national’s pinpoint yorkers have prevented batsmen from eking out easy runs at the death. He will be pumped to face off against Warner and Bairstow.

Vice-Captain: Bairstow has outscored his opening partner David Warner on a few occasions, who is a much more established T20 star. His new-found power game has helped him score quicker and put the pressure back on the bowlers.

Mohammad Nabi has been a dark horse all season and has already dismissed Dhawan once in both sides the previous encounter. Ingram looks like playing a big hand and has struck the ball cleanly in the limited opportunities he has gotten so far. 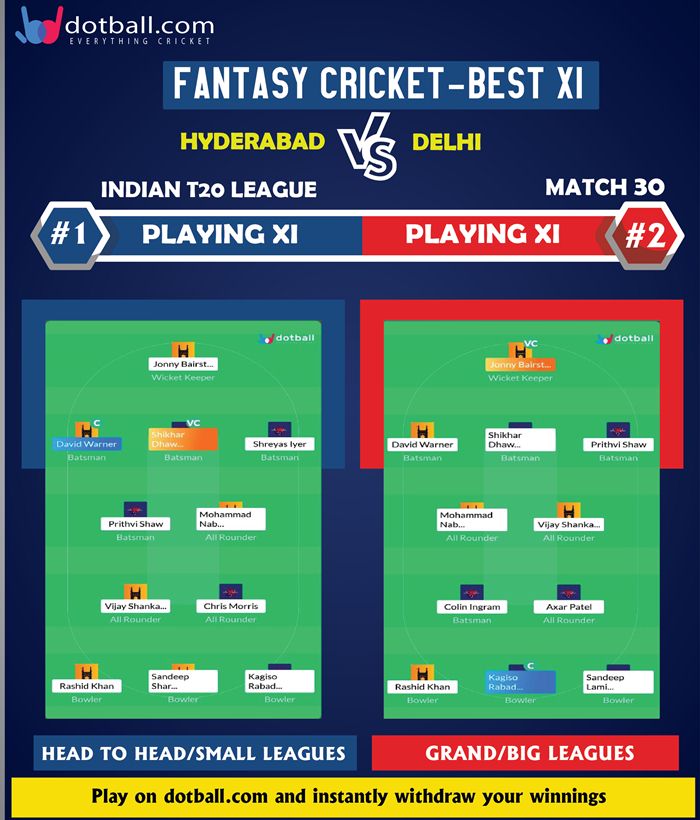 Khaleel Ahmed might finally get his chance to replicate his international success in the IPL. Prithvi Shaw has had a few cameos under his belt and will want to play a substantial hand for his side.

Ishant Sharma produced a high-quality spell against Kolkata. He has bowled a lot against Warner in international cricket and must know a few weaknesses if there are any. Bhuvneshwar Kumar’s contest against Dhawan could turn out to be a match-deciding one. 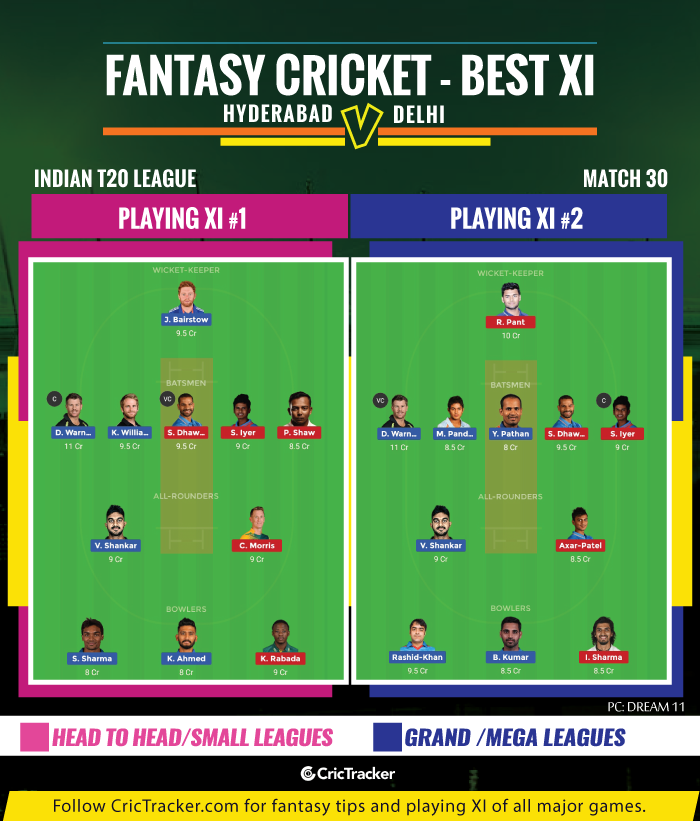