All that you need to read before picking your Fantain XI for Hyderabad vs Delhi.

The Delhi capitals will be high on confidence after winning their last encounter against Kolkata at Eden Gardens, on the back of Shikhar Dhawan’s stupendous form. The team is now in Hyderabad for the match no 30 of the Indian T20 league. For Hyderabad, they will again be heavily reliant on openers David Warner and Jonny Bairstow, because their middle order has been in a terrible form throughout the season so far. Let us take a look at both the teams before you make your Fantain Fantasy XI for Hyderabad vs Delhi.

With the man-in-form Shikhar Dhawan in the ranks, captain Shreyas Iyer will have little to worry about. It is unlikely that Delhi will tweak their winning combination.

Shikhar Dhawan – Delhi’s previous match against Kolkata at the Eden Gardens was all about India opener Shikhar Dhawan. The batsman was under a lot of pressure as he had been dismal prior to that, but it was his unbeaten 97 that helped chase down the target of 176 set by Kolkata. Delhi won the game by seven wickets to move up to the fourth position on the points table.

Shreyas Iyer – The skipper has been leading from the front with the bat consistently. Although he could not contribute much in their previous game, Iyer would be looking to come good on a batting friendly Hyderabad pitch and can get you some points on your Fantain Fantasy XI.

Rashid Khan – The leg-spinner will play a crucial role in dismissing an in-form Shikhar Dhawan. Rashid has a good personal record at the Hyderabad stadium and can provide crucial breakthroughs to the team.

David Warner – Apart from Kolkata’s Andre Russell, it is Hyderabad’s David Warner who is in the form of his life. Warner has been on a run-scoring spree this season and is a top pick across fantasy platforms. He is also an ideal choice for your Fantain XI captain. 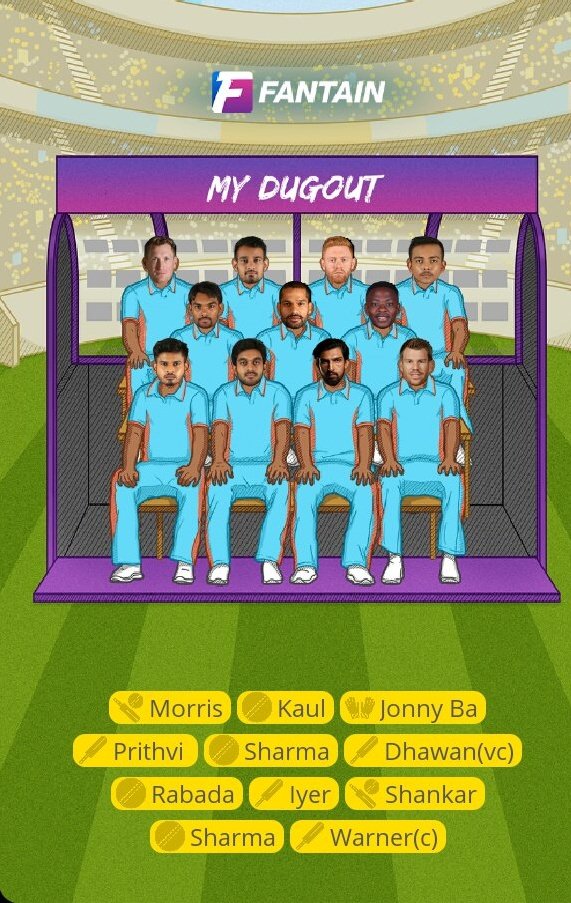