Both teams have done well in their last few matches of the tournament.

Both teams played out their first game of the season against each other at Mumbai where Delhi humbled the hosts by 37 runs. Since then, Delhi suffered a couple of losses before getting their campaign back on track to record 3 wins in a row which have placed them on the 2nd spot on the points table. Mumbai are not too far behind and are on the 3rd spot having won 4 out of their previous 5 games. Both teams will look to push ahead and stay ahead of the rest in the race for sealing a spot in the playoffs when they face each other at the Feroz Shah Kotla in Delhi on Thursday.

The Kotla surface hasn’t produced tall scores this year with the average first innings score being only 154. Teams chasing haven’t lost a game out of 3 matches. The surface is on the slower side and hence offers some purchase to the spinners. Both teams have a couple of skilled spinners in their ranks and fantasy team users must pick them in their team. Batsmen can score freely in the powerplay which calls to pick players from the top-order of either team. As far as the favourites tag is concerned, both teams are neck and neck with Delhi having a slight advantage due to their away win against Mumbai and because they have the home advantage.

Captain: After a middling start to the season, de Kock got himself into some form scoring 81 and 40 in his previous two outings taking his tally to 278 runs off 8 games at 34.75. His timing was impeccable in both games. The wicket-keeper will be up against his South African teammate Kagiso Rabada and the contest will keep everyone interested.

Vice-Captain: Rabada has been a revelation this year for Delhi. In 65 T20 games, the Proteas paceman has picked 3 four-wicket hauls and 2 of them have come in this edition of the tournament which has surged his wicket-tally to 17 off only 8 games. Delhi have used him largely in the middle overs but don’t be surprised if he is handed the new ball to counter the quality of Mumbai’s top-order.

Keemo Paul has been an X-factor for Delhi and won the Man of the Match award for his 3 for 17 in the previous encounter against Hyderabad. The fast bowler can generate decent pace and has a few variations up his sleeve which will keep him in good stead on the Kotla pitch. Malinga’s return has augured well for Mumbai as he provides more options and experience at the death.

Captain: Pandya’s form with both bat and ball has given Mumbai balance and make them a dangerous team. His unbeaten 16-ball 37 sealed a hard-fought win for Mumbai against Bangalore. He might not be one of the top run-getter in the tournament but his cameos at the end of the innings have often tilted the game towards Mumbai. With the ball, Pandya has 7 wickets from 8 games which are reasonable for someone who bowls in the middle overs.

Vice-Captain: Having missed the bus for the World Cup will inspire Pant to make a statement by making a telling contribution for Delhi. For batsmen who have made more than 200 runs this year, Pant’s strike rate of 161.18 is the second highest behind only Andre Russell. Being a left-hander, Pant will eye to take on the likes of Krunal Pandya and Rahul Chahar during the middle before exploding at the end.

Not known for his prowess in the shortest format of the game, Ishant Sharma has surprised a lot of people with his improved skills as a T20 bowler. Having dismissed both Rohit and de Kock in the earlier clash, he is likely to trouble them again purely due to the form he is in. Prithvi Shaw has played too many cameos this year and will love to produce a big inning. 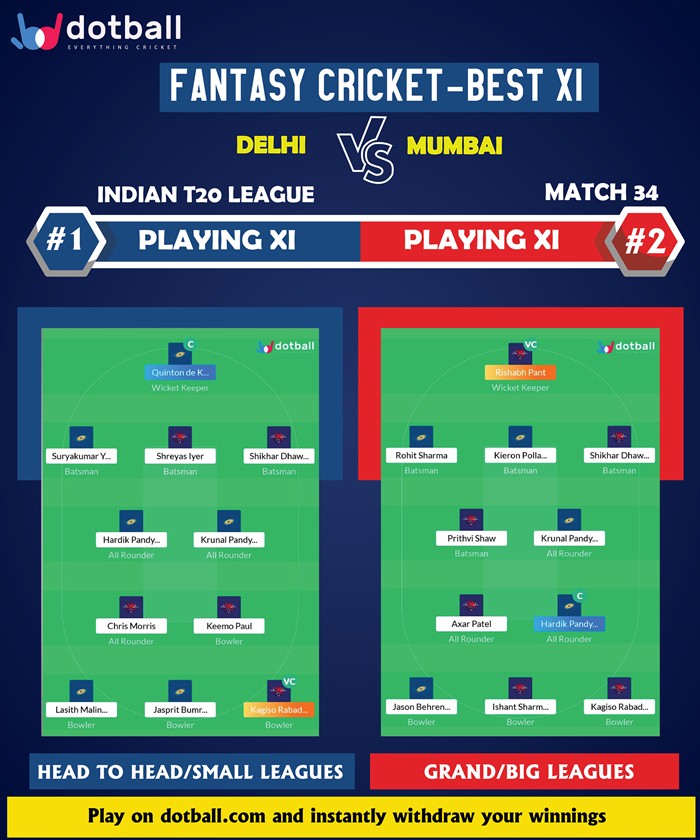 Morris has quietly picked up 11 wickets in 6 games and is currently the 3rd most successful pace bowler in the tournament. He hasn’t shone with the bat yet but has the potential to be a game-changer down the order for Delhi. Suryakumar Yadav will be keen to get a score under his belt after a few middling outings.

Behrendorff has done well with the new ball upfront and could pose a threat to Delhi in the powerplay. Krunal will be disappointed with his batting form but has enough composure and skill to turn it around. All eyes will be on Dhawan to provide Delhi with a rousing start, especially against a classy Mumbai pace attack. 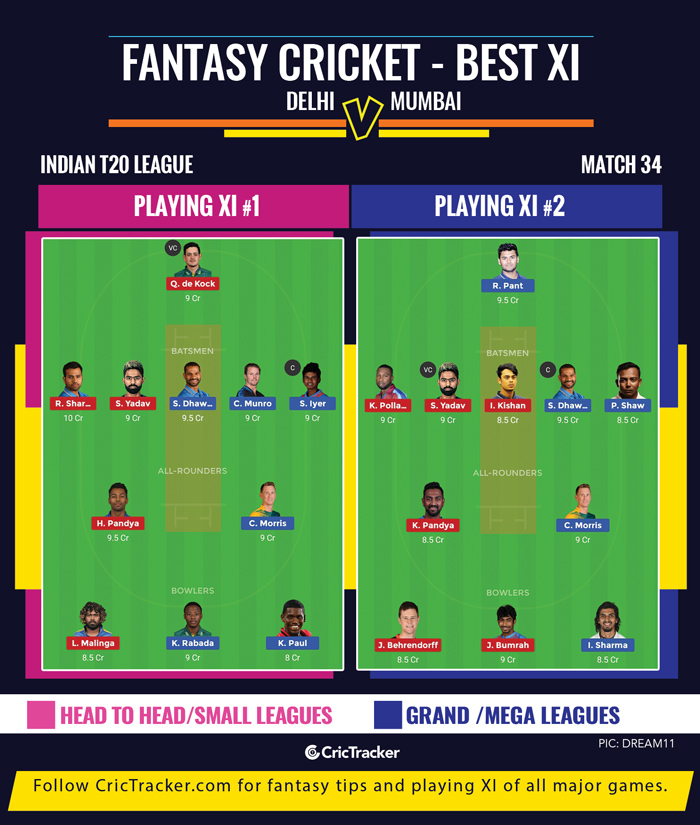