Dhoni and de Villiers are expected to play this clash after both superstars missed their respective previous game.

By scratching off a win against Kolkata, Bangalore have marginally kept themselves alive in the tournament. They will have to scrape off wins in each of their remaining 6 games to have an outside chance of qualifying for the Play-Offs. The first of those 6 games will be against heavyweights Chennai which will be the second contest on Sunday at the M Chinnaswamy Stadium in Bangalore.

Such is the nature of this game that despite being a contest between the table-toppers and the bottom dwellers, Bangalore are coming off a win while Chennai faced a defeat in their previous game. But, since Chennai have lost only 2 out of 9 games, their loss against Hyderabad, in which they were without their regular skipper MS Dhoni, could well be an aberration.

Dhoni and de Villiers are expected to play this clash after both superstars missed their respective previous game. The Chennai spinners will once again hold the key as they were the ones who ran havoc and bowled out Bangalore for 70 when both teams last faced each other.

Dhoni will be tempted to play Harbhajan, who has played only 4 times despite being in great form. Such has been the form of Chennai. It will be prudent to pick most of your batsmen from Chennai as Bangalore are heavily reliant on Kohli and de Villiers. Moeen and Stoinis have done the job for them in the last few games and might prove to be efficient picks. Chennai will start as favourites purely due to their outstanding form and their big win over Bangalore earlier in the tournament.

Captain: Just when Bangalore started feeling dejected, Kohli has put his hand up and delivered powerful performances which eventually helped them win 2 out of their last 3 games. The Indian captain has struck the ball well after missing out in the first half of the tournament. He is likely to continue in his merry way given his unmatched consistency across formats in the past couple of years.

Vice-Captain: Moeen Ali has been a diamond in the rough for Bangalore. He wasn’t utilised well earlier but since he was imposed with responsibility, the English all-rounder has delivered in each of the last 3 games with either bat and ball. Don’t be surprised if he continues his good run of form.

Going by his lofty standards, Raina has had a middling season so far. He will be happy to set the tempo against the spinners in the middle overs but must be mindful of Moeen Ali. If Bangalore could use Negi better, the young all-rounder has potential to deliver the goods on a regular basis.

Captain: Imran Tahir has been Dhoni’s go-to-man and the 40-year-old hasn’t disappointed his skipper even once. He foxes batsmen with his smart variations and change in trajectories. Can he keep the likes of Kohli and AB quiet? If he slips his googlies in against these two then there is a good chance of that happening.

Vice-Captain: Steyn made an impact on his return, keeping Kolkata quiet in the Powerplay. He has not only lent experience but also added pace to the struggling fast bowling unit of Bangalore. He will only improve from here on and can pose problems to an underperforming top order of Chennai. 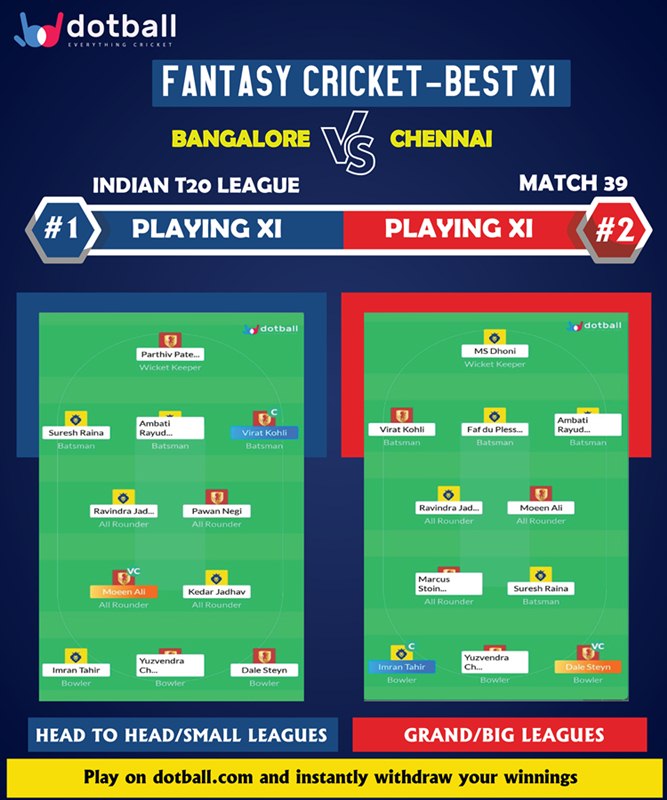 Dhoni will hold key for Chennai in the second half of the innings and also when he is behind the stumps to the spinners. Jadeja has shown his value with the bat besides being ever reliable with the ball.

After receiving a pounding in the previous game, where he conceded 45 runs in 3 overs, Chahal will look to put it behind him and conjure up a magical spell against Chennai. Chahar has swung the ball well in the Powerplay and will be up for a battle with Kohli. 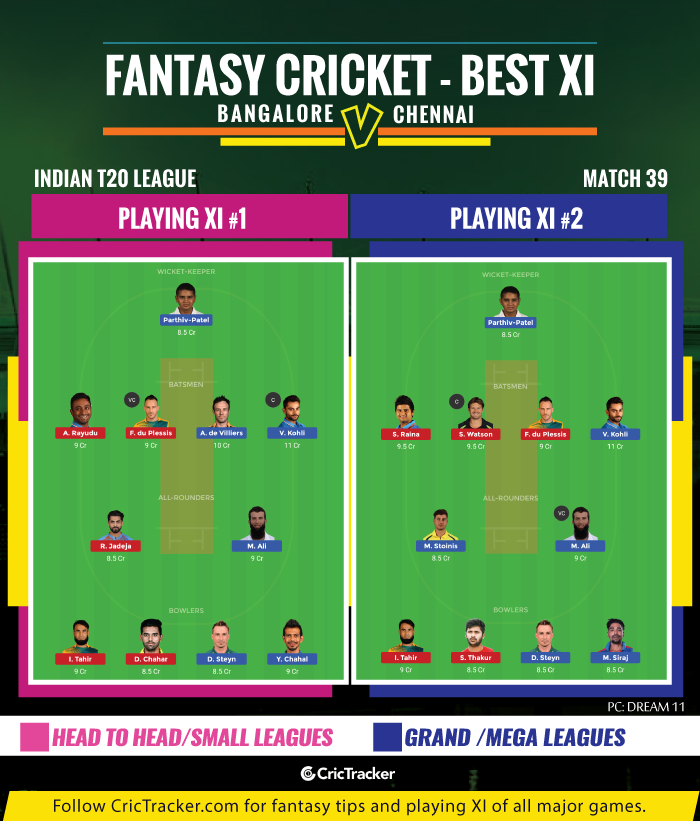 Watson has had far too many quiet games and must hit form before it is too late. The former Australian batsman hasn’t looked out of form but hasn’t been able to make a substantial contribution. Stoinis will look to carry the good work and could be used more with the ball.