Whom will you make the captain in your fantasy team?

Rajasthan scripted an inspirational 5-wicket win against heavyweights Mumbai to keep themselves relevant in the tournament. They have handed the reins of the side to Steve Smith and are still fighting for a spot in the final four despite winning only 3 out of 9 games. They will be up against Delhi, who are also fresh from a convincing victory over Punjab. Both teams have all to play for when they face each other in Jaipur on Monday.

Rajasthan might still be without the services of Jos Buttler who has flown back home for family reasons but have enough resources in their shed to fill the void. With Rahane struggling, Rajasthan might give him a rest and get Rahul Tripathi to bat at the top of the order. Delhi’s batting has come together as the tournament has progressed.

Shikhar Dhawan’s return to form is a big boost. The surface at Jaipur hasn’t produced high scoring games and has also assisted the spinners. Delhi’s twin legspinner’s Amit Mishra and Sandeep Lamichhane might prove to be good picks while guys with tighter techniques like Smith and Iyer could play pivotal roles for their respective teams.

Captain: The brilliance of Kagiso Rabada has been a delight to watch this year. His accuracy with the yorkers as well as smart variations have kept batsmen thinking during the end overs. In 10 games, Rabada has claimed 21 wickets and looks good for a few more.

Vice-Captain: After being trusted with the leadership baton, Smith responded with a classy unbeaten 59 – his second fifty of the season – to anchor a tight chase against Mumbai on Saturday. He has done his bit for Rajasthan this year by dropping the anchor during the middle overs. On a tricky pitch in Jaipur, Smith will yet again look to bat through the innings.

Ben Stokes is having a quiet season and in Buttler’s absence, the Englishman must take responsibility and do the job in the middle overs, something which Rajasthan has struggled to do. In the absence of Buttler, it will make more sense to have Pant as your wicket-keeper.

Captain: Pant is likely to take on Shreyas Gopal, who has been Rajasthan’s most successful spinner this year. Going by the numbers, Pant hasn’t lived up to the expectations and averages just over 28. But he still has time and abundance of talent to make amends for it.

Vice-Captain: Young turk Parag played a solid hand in their previous win over Mumbai and will be high on confidence. His leg breaks can pose problems for Delhi since the Jaipur pitch offers the wrist spinners some purchase.

Stuart Binny’s seamless transition into the side has given Rajasthan more options. He can not only tonk the ball but can deliver quiet overs up front. Archer’s magnificent season is only getting better and it will be silly to not pick him in your fantasy team. 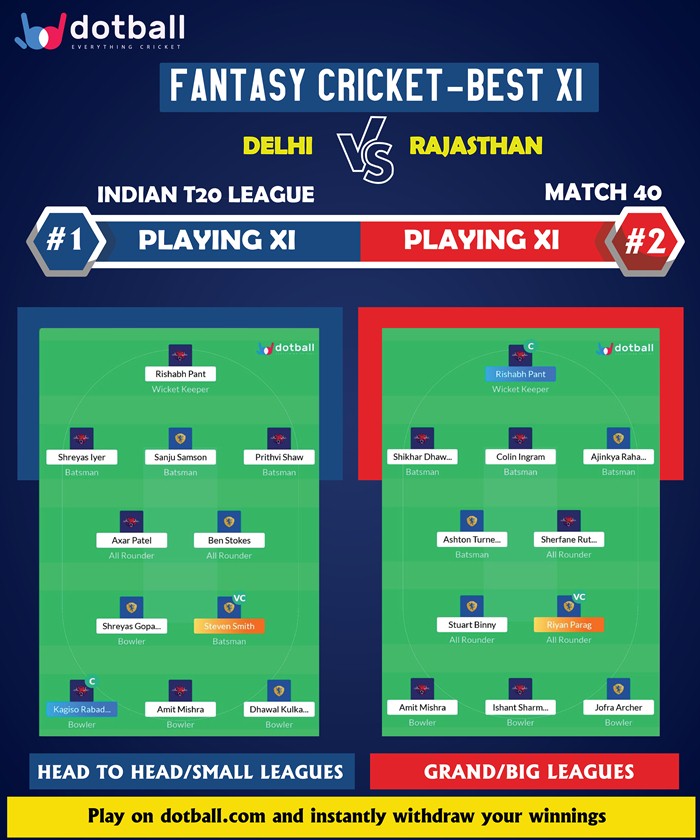 Iyer is striking a shade under 120 this year but has produced crucial knock just when his team needed it. Shaw hasn’t had the kind of impact he was expected to have but has enough quality to turn it around quickly.

With Pant and Shaw not firing just as yet, Dhawan is more than making up for both of them by providing swift starts to Delhi. With the leadership pressure off Rahane’s shoulder, expect him to play freely and contribute more for the team’s cause. 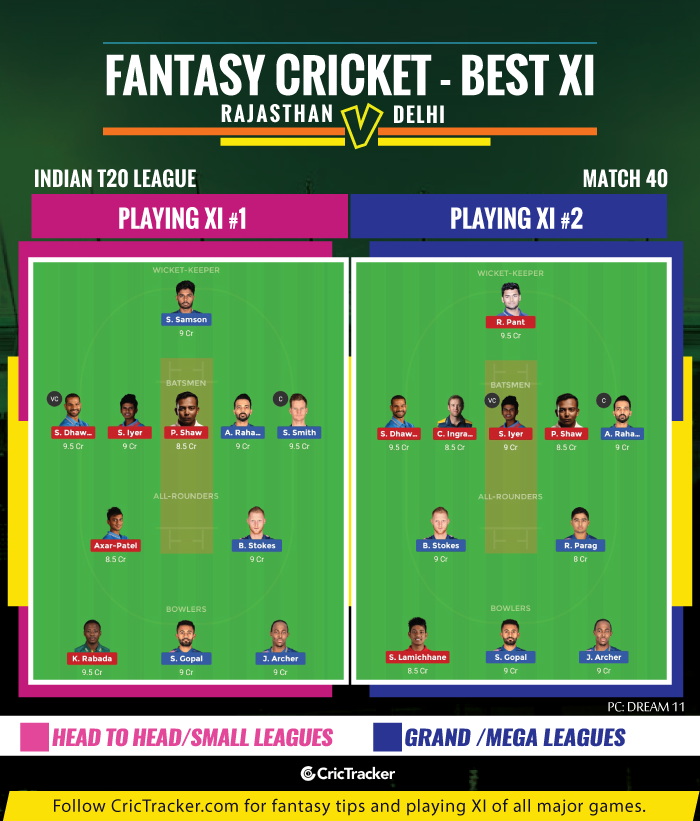