All that you need to read before picking your Fantain XI for Bangalore vs Punjab.

Late bloomers Bangalore will host Punjab at the M Chinnaswamy Stadium for match no. 42 of the Indian T20 league. With two back to back wins, the hosts will aim to continue their winning streak, although even that may not help them reach the playoffs. The visitors, on the other hand, are coming into this one on the back of two successive losses, and are currently fifth on the points table. Their batting depth is not good, with too much reliance on opening duo Chris Gayle and KL Rahul. Here is a small guide to help you form your Fantain Fantasy XI for the Bangalore vs Punjab game.

With two wins back to back, it is unlikely that captain Virat Kohli will make any changes to his playing XI. The entry of South African speedster Dale Steyn has augured well for the side, and they will be looking to bank upon him for some crucial breakthroughs against Punjab too.

News has it that Moises Henriques and Mujeeb Ur Rahman are both fit to play this game.

Virat Kohli – Although the skipper did not have a good day against Chennai, he is still Bangalore’s spearhead in the batting department. A lot will depend on Kohli once again, who is the costliest buy across fantasy platforms.

Dale Steyn – The South African pacer has changed Bangalore’s fortunes ever since making his IPL 12 entry in the game against Kolkata. The replacement for an injured Counter Nile, Steyn has bagged four big wickets in two games, and is expected to play a crucial role in dismissing KL Rahul/Chris Gayle in the powerplay.

Navdeep Saini –Navdeep Saini who is the lone good pacer in what is called the worst pace attack in the league this year. The young guy has clocked between 140-145kmph consistently and has also given crucial breakthroughs to the team. On the fast Chinnaswamy pitch, Saini will look to do more damage and earn you points on your Fantain Fantasy XI.

Mohammed Shami – Shami is the best bet Punjab will have on the pitch that has been on offer at the Chinnaswamy this year. But Punjab’s overall bowling is dismal and it won’t be an easy task to remove Kohli and the like. 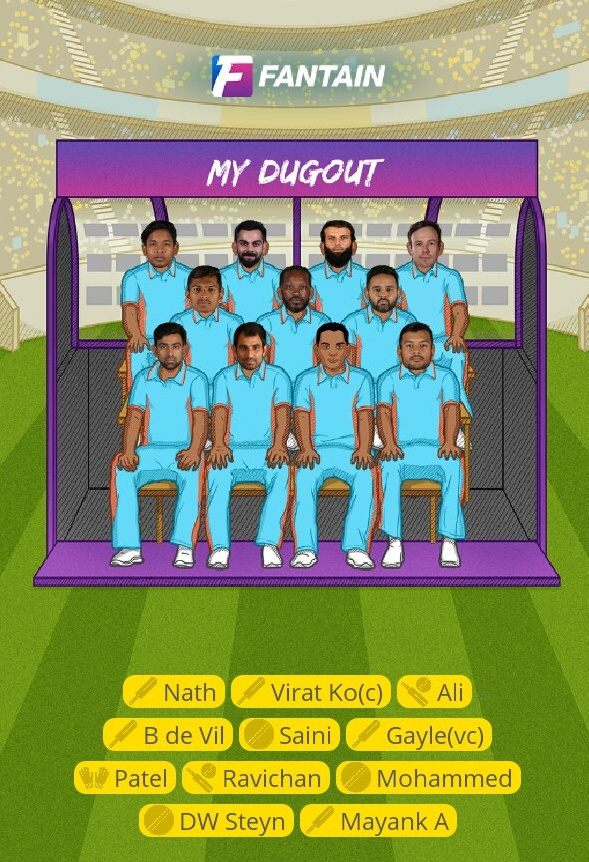