All that you need to read before picking your Fantain XI for Rajasthan vs Hyderabad.

Ever since sacking Ajinkya Rahane from captaincy and letting Steve Smith take charge of the team, Rajasthan’s fortunes have changed. They won both their games under Smith’s captaincy, the last one being against Kolkata. And with that win, they are still alive in the race for the playoffs. In another must-win encounter to enter the top 4, Rajasthan will host Hyderabad for match no. 45 of the Indian T20 league.

Hyderabad are coming into this game on the back of a loss to Chennai, and will also be without Jonny Bairstow, who has returned to England to prepare for the World Cup. Hyderabad need to win three out of their four games to make it to the playoffs, and Rajasthan’s not so strong bowling line-up could be a perfect opportunity to begin their winning streak with. Here is all that you need to know for both the teams before picking your Fantain XI for the Rajasthan vs Hyderabad game.

Rajasthan’s batsmen, apart from 17-year-old Riyan Parag, failed to do anything substantial against Kolkata, despite Kolkata’s bowling being the weakest in this season. Ajinkya Rahane, who scored a century in his first game after being removed as captain, and new captain Steve Smith, will have to make their bats work. Ben Stokes’ form has also been disappointing throughout the season.

Hyderabad, on the other hand, will hope that Rashid Khan returns to form after the young leg spinner faced Shane Watson’s onslaught in their previous game. With Bairstow back home, the onus of scoring runs will lie on David Warner and Kane Williamson. 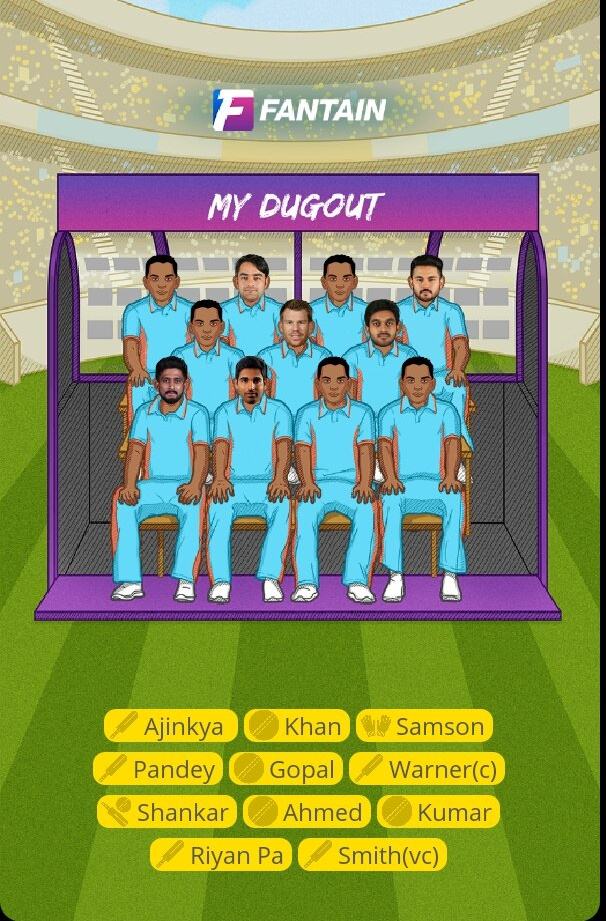 The Sawai Mansingh Stadium has been a high-scoring pitch this year, which is why it is a safe bet to go with a batsman for both your Fantain captain and vice-captain.

David Warner could once again spearhead Hyderabad’s batting department, and for Rajasthan, skipper Steve Smith should step up in this do-or-die game.

Riyan Parag, after his heroics against Kolkata, and Manish Pandey, after his show against Chennai, could also get you a few points.

Shreyas Gopal will be expected to do most of the work with the ball for the home team because he has a good record at the venue, while Hyderabad will once again be banking upon Rashid Khan and Bhuvneshwar Kumar.

Varun Aaron was in top form against the Kolkata Knight Riders. In only his second appearance for the Rajasthan Royals this year, the pacer finished with 4-1-20-2 and bagged the man of the match award. The Jaipur pitch should give him assistance and the confidence to carry on his form. 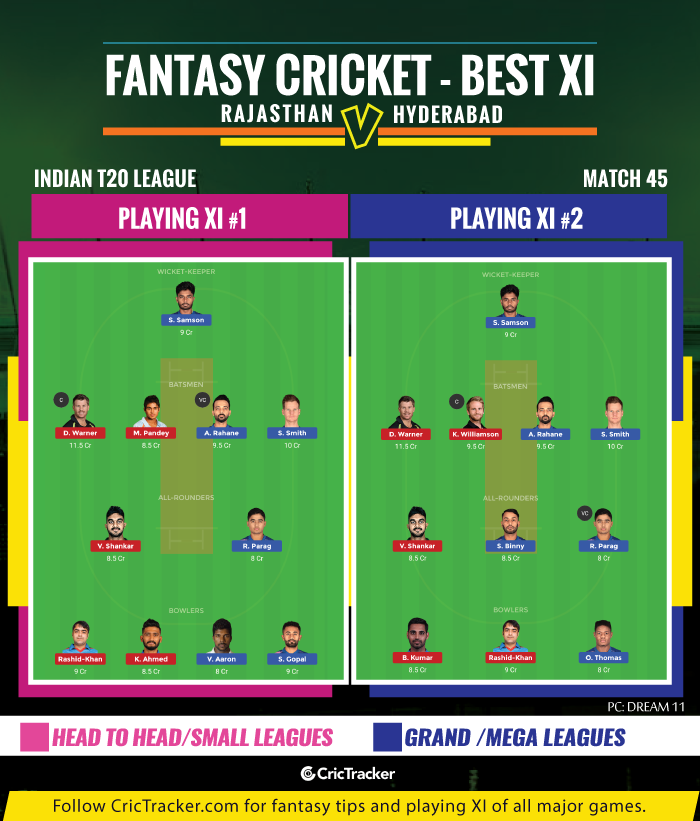 David Warner – Given that Warner’s favourite opening partner Jonny Bairstow has headed home, and the Sunrisers’ middle-order is very unreliable, Warner will again have to take up the responsibility of laying a good foundation at the top, to which the middle and lower middle order can contribute as per their capacity.