Table toppers CSK host DC at home, but will they have to play against Dhoni once again?

Chennai and Delhi have played their own respective brands of cricket and have an identical win/loss ratio (8:4) after 12 games in the tournament. But owing to a superior NRR, Delhi occupies the top spot but that can change quickly as the Capitals face Dhoni’s men at the MA Chidambaram Stadium, where Chennai have lost only a solitary game this season out of 6 matches.

Chennai struggled for momentum in the absence of their regular skipper MS Dhoni in their last game against Mumbai. However, Dhoni is expected to be back in the team for this crunch encounter. Delhi are on a roll after a slow start and have won 6 out of their previous 7 games including three on the bounce – the last of which came against Bangalore on Sunday.

Expect fireworks when the table-toppers go head to head in the final official home game for Chennai. Fantasy-wise, this will be another game where the spinners can inflict damage hence it will be prudent to pick guys like Imran Tahir and Amit Mishra. Dhoni will be another hot pick though he hasn’t batted again after his heroics against Bangalore 10 days ago.

Senior pro Dhawan looks likely to play another slap-happy inning. As far as the game is concerned, despite Delhi going through one of their great runs in the recent past, Chennai still start as favourites due to their home advantage and the return of their talismanic skipper Dhoni.

Captain: With 25 wickets from 12 games and Delhi still likely to play at least 4 more games, Rabada has a golden opportunity to break DJ Bravo’s record (32 wickets in 2013) of the most wickets in a single season of the IPL. His consistency has been a hallmark of a true professional and his accuracy has been nothing short of immaculate. His contest against Dhoni at the back end of the innings will be one to watch out for.

Vice-Captain: Raina hasn’t really hit his straps 12 games into the season. An average of 22.45 and a strike rate of 120.48 doesn’t do justice to someone who is hailed as the most consistent player in the IPL. But having Dhoni’s backing must give him confidence. He will want to produce the goods now since the tournament is heading towards the knockout stages.

Axar Patel has been very economical conceding runs at 7.08 per over. He becomes a more dangerous bowler once the surface starts assisting to the slower bowlers hence he will enjoy bowling at the Chepauk.

When your bowlers bowl the Dot balls and get those wickets you win on Dotball. 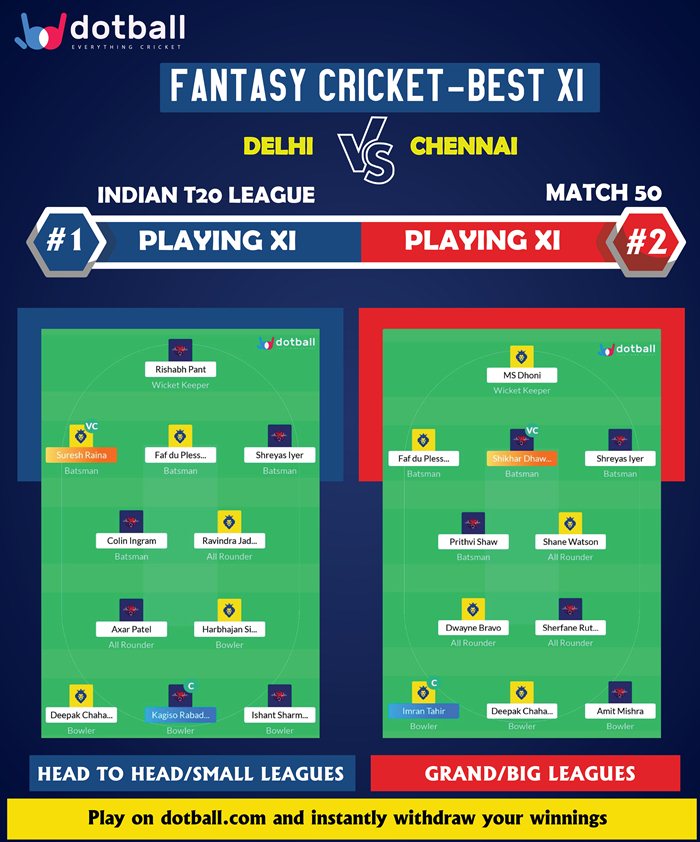 Captain: On average, Tahir has conceded runs at only 6.50 per over this season. While doing so, he has snapped 17 sticks from 12 games and has been Dhoni’s go-to-man. Playing at Chennai has brought out the best in him. He will have his work cut out against Pant, who likes to thwart the spinners.

Vice-Captain: Dhawan’s return to form has coincided with Delhi’s revival in the ongoing season. In the last 6 games, Dhawan has galloped 299 runs at 59.8 out of which Delhi have gone on to win 5. His ability to attack the new ball bowlers takes the pressure off the middle-order and helps Delhi in posting big totals.

Rutherford can be an X-factor and an efficient pick because of his dual role. He can hit the long ball and chip in with a few overs with his dibbly-dobblies.

Crazy for Cricket? Make your knowledge of use, with Dotball Fantasy.

Watson has rediscovered his touch just at the right time and he enjoys contributing in vital games. He has enough quality and international experience behind him to tackle Delhi’s famed pace attack. 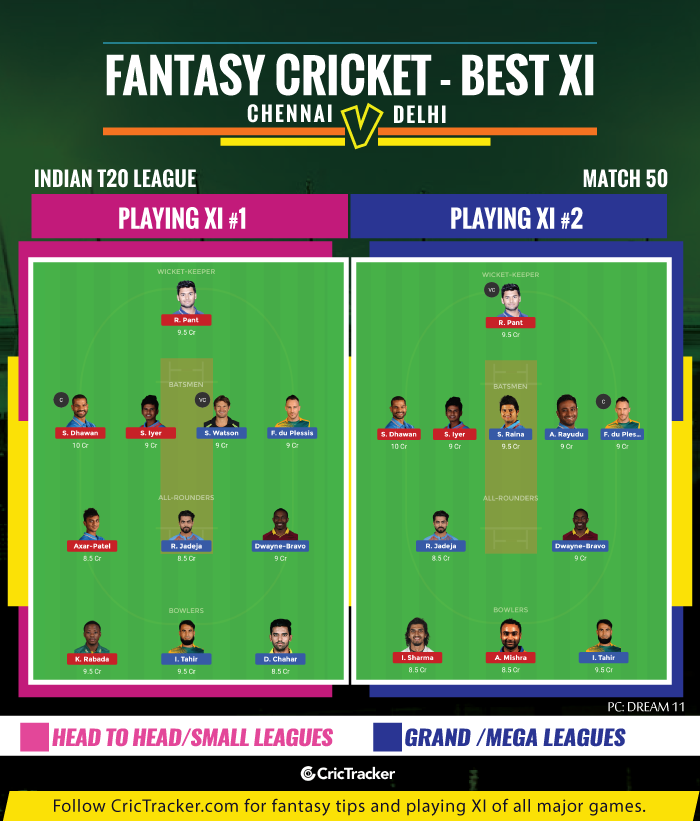 Mishra will hold the key for Delhi on a surface which will suit his style of bowling. Jadeja provides quiet overs in the middle and is always a dark horse with the bat.