Rayudu batted at a strike rate of 170.2 on a surface where other batsmen found it hard going

The 54th match of the season featured Kolkata Knight Riders hosting Mumbai Indians at the Eden Gardens. The clash was to determine which team would finish on the pole position after the league stage. Both teams were a certainty in the final four but as the top 2 teams get an additional chance to get into the final, it was not a dead rubber by any means. As it turned out, MI improved their already brilliant record against KKR and secured the top spot and Ambati Rayudu ended up being the man for them.

MI made 6 changes to their line-up from their previous match as they wanted to test their bench strength before the playoffs against a strong side like KKR. They were asked to bat first after losing the toss and they suffered the loss of Lendl Simmons for a duck. The new addition to the side Saurabh Tiwary made a fifty in his first game of the season and shared a half-century stand with the skipper Rohit Sharma.

After Rohit’s dismissal in the 9th over, Ambati Rayudu was the new man at the crease. He was making a comeback in the playing XI after recovering from an injury that kept him out of the side for the most part of the league. But he was adamant on making a mark in his return game and here’s how he performed.

Rayudu was at the crease in the 9th over when the score read 69/2. After a decent partnership, it was important not to lose any further wickets and build another solid partnership. Rayudu understood the match situation pretty well and made a cautious start to his innings. He only focused on turning the strike over initially and didn’t look to go after the bowling from the outset. He scored his first boundary off the 12th ball he faced. The run-scoring wasn’t easy and he ensured that wickets were in hand for the slog overs and reached 20 off 18 balls after the end of 14 overs.

Upped the ante at the right time

When MI reached 105/2 after 14 overs, it was time to increase the scoring rate. He got going by smashing Sunil Narine for a boundary in the 15th over. He collected a four and a six in the next over off Umesh Yadav and suddenly his strike rate tasted a massive boost. In the process, he was involved in a confusion in running between the wickets with his partner Tiwary who was run out for 52 in the 16th over.

The dismissal didn’t impact Rayudu’s approach at the crease and he brought up his fifty off just 32 balls in style with a six. It wasn’t easy for the new man Kieron Pollard to strike big as the pitch wasn’t easy for batting. Rayudu stepped up in the situation and took it upon himself to take MI to a competitive total. He struck a four and a six in succession to Kuldeep Yadav in the penultimate over. But in the bid to go for another big one, he was stumped by Robin Uthappa. His knock lasted for 37 balls in which he scored 63 runs with 6 fours and 3 sixes.

The importance of his knock can be identified from the fact the last over bowled by Trent Boult went for just 4 runs as the new batsmen found it hard to get going straight away. It was due to his efforts that MI reached a respectable 173/5 after 20 overs.

KKR who have been chasing down totals quite easily didn’t find the same ease while chasing this time around. They suffered wickets at regular intervals and despite losing the match by just 9 runs, never really dominated the chase. Rayudu’s innings proved to be the difference between the two sides and he is CricTracker’s Player of the Match with a rating of 4 out of 5. 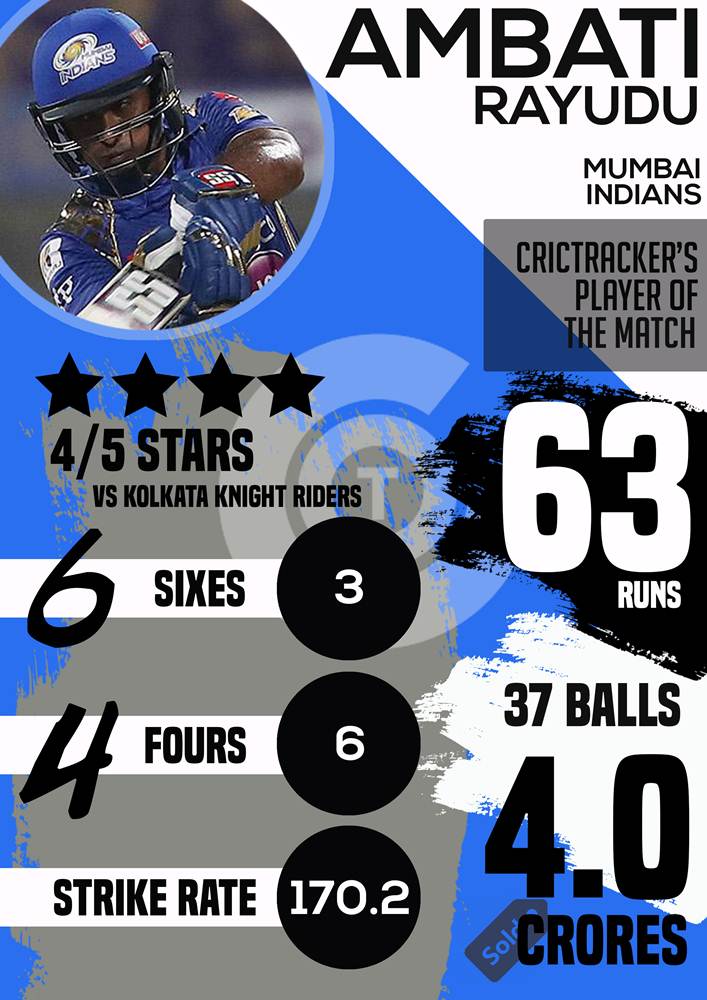