It was a virtual knockout as a playoff spot was on the line when Rising Pune Supergiant met Kings XI Punjab at home for the penultimate match of the league stage. Although it was expected to be a cracker of a game as both the sides were in form coming into the match but Shardul Thakur made it a rather one-sided one and confirmed a berth for RPS in the first Qualifier game against Mumbai Indians at the Wankhede Stadium.

The hosts asked KXIP to bat first and they bagged a wicket off the first ball of the match. Martin Guptill departed for a duck off the bowling of Jaydev Unadkat that pegged the side back early. There were absolutely no batsmen who showed the will to stay for long and followed each other back to the pavilion. Axar Patel ended up being the leading scorer with 22 runs and the side was bowled out for just 73 in 15.5 overs.

It was a disappointing batting performance from a team that had shown so much fighting spirit in the last 5 games and was rising to the occasions to keep the campaign alive. So much was expected in the crucial encounter but their batsmen fell like nine pins and as a result, there wasn’t enough for the bowlers to defend.

RPS knocked out KXIP comprehensively and the best player for them turned out to be Shardul Thakur. Let’s have a look how he performed in the game:

Capitalized on the early advantage

Unadkat had sent back the dangerous Guptill off the first ball of the match. The importance of the wicket in a vital game was enormous and the KXIP side was badly hurting after that. The other opener Wriddhiman Saha and the number 3 batsman Shaun Marsh looked to rebuild the innings and added 19 runs. But when Thakur came on to bowl his second over in the powerplay, he removed Marsh who had shown signs of form with a couple of boundaries.

It was a scrambled seam delivery from the bowler that pitched on a good length and angled across the batsman. The ball stopped a bit on Marsh and he drove the ball in the air but it went only as far as the mid-off region where the skipper Steve Smith grasped an easy catch. Marsh departed after scoring 10 off 13 balls and Thakur ensured there were no partnerships up the order and the pressure was on.

KXIP were tottering at 29/3 after 5 overs and Thakur came on to bowl his third and the last of the powerplay. He bowled a short ball at the body of Rahul Tewatia who mistimed a pull shot. The ball lobbed in the air towards short fine leg where Undakat was stationed. He ran to his left and dived to complete a spectacular catch. Tewatia went back for 4 runs and they were reduced to 31/4. It was wonderful to see an Indian fast bowler making good use of the short ball.

Put final nail in the coffin

Even though KXIP were 4 down, they still had the skipper and their best batsman Glenn Maxwell at the crease. He was the only one who could have revived the side from the situation of crisis and taken them to a substantial score. But 3 balls after Tewatia’s dismissal, Thakur scalped the big fish.

This time, the bowler got lucky and one might say, he deserved it for the efforts. It was a half-volley on the leg that was hit in the air by Maxwell towards deep backward square leg and found Ajinkya Rahane perfectly who did not make a mistake in taking an easy catch. He was out for a duck and it was a huge blow for the batting side that didn’t recover at all after the blow.

Thakur bowled his fourth over on the trot and gave away just 5 runs and ended with magnificent figures of 19/3 in 4 overs. For a wonderful bowling spell, he is CricTracker’s Player of the Match with a rating of 4.5 out of 5. 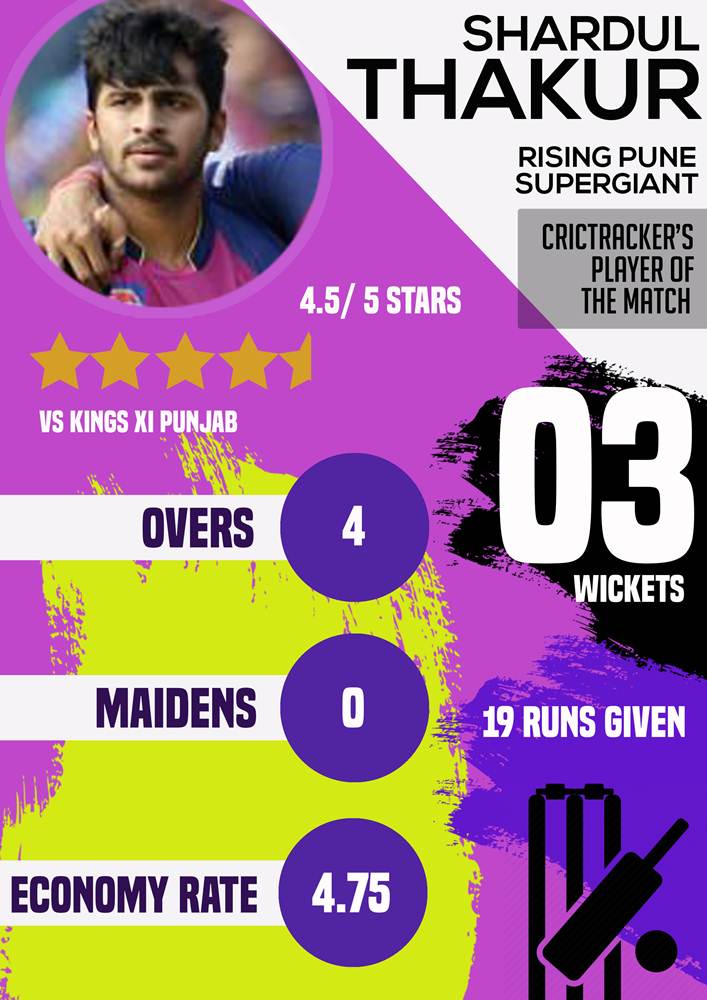