The last match of the league stage was a dead rubber in the context of the league as both Delhi Daredevils and Royal Challengers Bangalore were knocked out of the race to the playoffs. But pride was still at stake and none of them would have wanted to end on a losing note. As it turned out, it was the RCB skipper Virat Kohli who played the defining innings and handed his side only the third victory of the season.

Both the teams went in with just 3 overseas players in the playing XI. The visitors won the toss and opted to bat first but were rocked back early as Vishnu Vinod was removed for just 3 runs. But Chris Gayle and Virat Kohli combined well and took the innings forward. Gayle made 48 off 38 balls but Kohli went on to score a half-century. A late cameo from Pawan Negi propelled them to a fighting total of 161/6 after 20 overs.

In reply, DD lost Sanju Samson for a duck in the first over. Karun Nair, Shreyas Iyer and Rishabh Pant all got starts but none of them went on to play the match-winning innings. Harshal Patel bowled beautifully and bagged 3 wickets. The fireworks from Mohammad Shami brought back the hopes for DD but it was too big a task at hand for him at the end.

RCB won the match by 10 runs and Kohli was the major contributor in that. Here’s how he performed in the match:

Chris Gayle was batting well at one end and Kohli came in to join him in the 5th over after the fall of Vinod. Initially, Kohli wasn’t keen on going for the big shots and saw off the new ball. The score after the powerplay read 37/1 and there was no urgency shown by him to up the ante. He got his first boundary off the 9th ball he faced when he slammed a short delivery from Amit Mishra to the deep mid-wicket fence. Off 11 balls, the right-hander had 10 runs to his name but he ensured there were no further hiccups after the initial loss.

Kohli had his eye in and was ready to explode. He played a magnificent shot to Corey Anderson off the first ball of the 9th over, a simple extension of the cover drive landed over the extra-cover boundary that got him going. He flicked Nadeem to the fine leg boundary in the next over to collect another boundary and once again went after Mishra in the 12th over. He struck the leg-spinner for a six and a four off consecutive balls to get closer to his half-century.

He brought up his fifty in the 15th over off 39 balls and a platform was set for him to finish on a high. He hammered Zaheer Khan for a six in the 17th and it seemed as if the Delhi crowd was in for a Kohli special finish. But unfortunately, he couldn’t get enough power to a lofted shot and ended up giving a catch to the long-off fielder off the bowling of his counterpart Zaheer. He departed after scoring 58 off 45 balls that consisted of 3 fours and 3 sixes.

The reason why the knock of Kohli was so important is that the RCB batsmen had failed miserably in the season thus far. In the last season as well, the batting of the team was heavily dependent on his batting. This year, he failed to come good on most occasions which is the reason why RCB were languishing at the bottom. With a fifty in the final innings of the season, it was once again adamant that RCB bank upon Kohli and when he failed in the past, they struggled to even get past 100. His knock of 58 really set up the match for them and ultimately they won the third game of the season.

Virat Kohli for his impactful knock is the Crictracker’s Player of the Match with a rating of 4 out of 5. 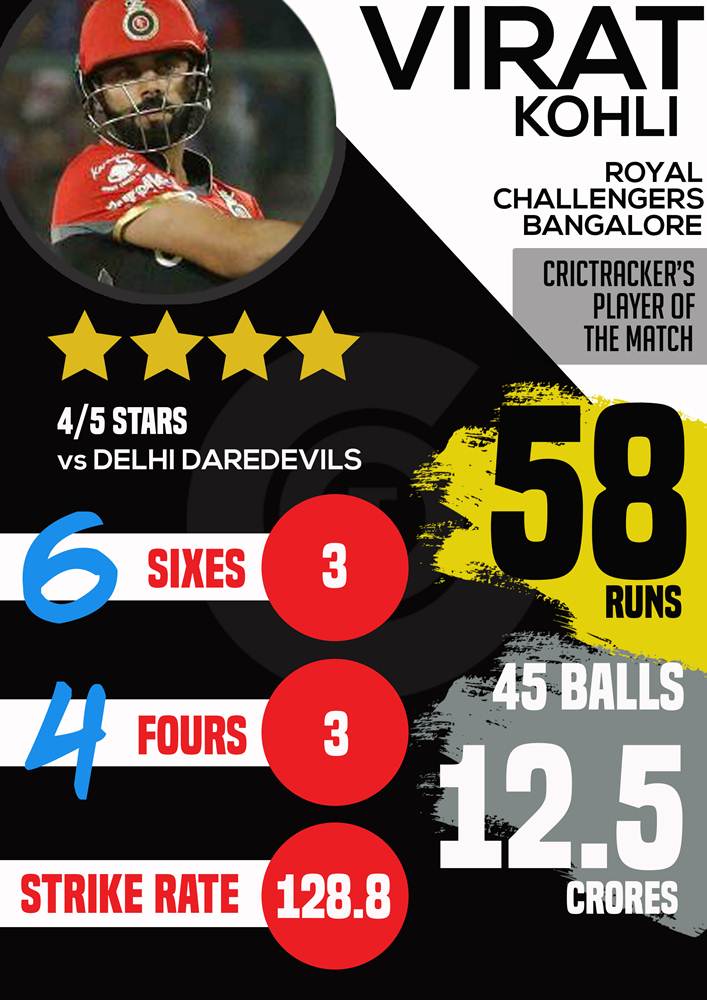