Sundar bowled a terrific spell of 16/3 that did not allow the MI batsmen to find any sort of momentum in the run chase.

After the league stage ended, it was time for the first Qualifier between the table toppers Mumbai Indians and the number 2 team Rising Pune Supergiant. It was expected to be a cracker of a game at the Wankhede Stadium but Washington Sundar enforced it to be a rather one-sided match. MI hadn’t defeated RPS in the league stage on both the occasions and once again they failed to get the better of the neighboring franchise.

Playing at home, MI won the toss and asked RPS to bat first. The Pune-based franchise got off to a poor start as their consistent opener Rahul Tripathi departed for a duck in the first over. To make the matters worse, the skipper Steven Smith also went back after scoring a solitary run. But just then, Ajinkya Rahane found his form back and struck a crafty half-century and added 80 runs for the 3rd wicket with Manoj Tiwary who also notched up a fifty. A blazing finish was provided by MS Dhoni as he scored 40 off 26 balls that included 5 sixes and propelled the RPS score to 162/4.

In reply, Parthiv Patel made full use of the fielding restrictions and sent a few over the ropes. However, his partner Lendl Simmons found it hard going and was dismissed for just 5 off 13 balls. A huge batting line-up was still to follow but Washington Sundar turned the game on its head with a wonderful spell of 16/3 and inflicted a collapse in MI’s batting as they failed to recover and fell short by 20 runs. RPS made it to the final of IPL and it became possible due to the heroics of Sundar.

Hers’s how the 17-year-old performed in the match:

The off-spinner was struck for a six by Parthiv Patel in the first over he bowled and conceded 8 runs in total. He came back to bowl the last over of the powerplay and scalped the big fish – Rohit Sharma. Sundar bowled one on the stumps to which Rohit attempted a sweep shot and got hit on the front pad and a slight appeal resulted in the umpire raising his finger. The MI skipper was gutted and the replays showed why. He had got a big inside that the umpire failed to pick. He was unlucky once more to be given out LBW while getting an edge. The bowler though was ecstatic as he had picked up the big wicket on whom the MI batting was heavily dependent.

Three balls after Rohit’s departure, he claimed another huge wicket in the form of Ambati Rayudu. The batsman attempted a pull shot off a slightly shortish delivery but managed to connect from the top half of the bat. Captain Smith had positioned himself at short mid-wicket where he took an easy catch. Rayudu went for a duck and Sundar had put MI on the back foot as the backbone of the middle-order was broken.

In the 8th over, it was time for Kieron Pollard to fall prey to the off-spinner. A fuller length ball on the stumps was casually flicked by the West Indian with no intent and Smith at the same fielding position gobbled another to present Sundar his third wicket. After 3 overs, his figures read 12/3. He came back for his last in the 13th over and gave away just 4 runs and made it extremely difficult for the batsmen to score runs off him.

His magnificent spell proved to be the turning point as the three impactful batsmen were neutralized. The pressure mounted on the batsmen that followed as the required run-rate just kept creeping up. Ultimately, they lost the match and RPS earned a terrific victory. The impact of his spell was huge considering the fact that the RPS side were without the services of Ben Stokes and Imran Tahir who had left for the national duties.

Washington Sundar for his defining spell is CricTracker’s Player of the Match and earns a rating of 4.5 out of 5. 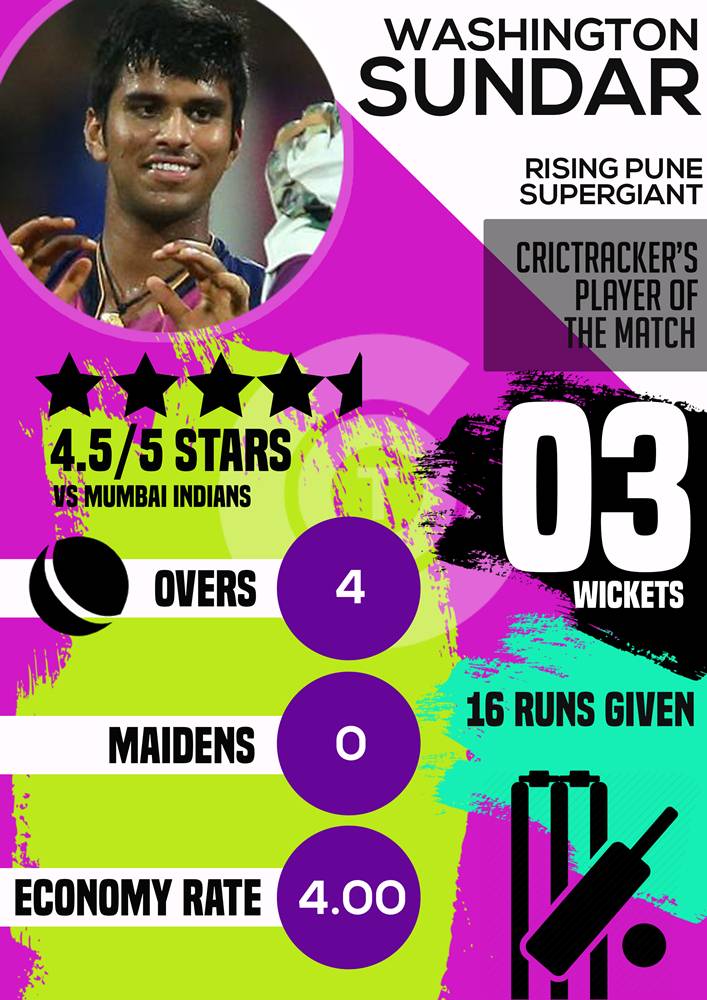