The leg-spinner finished with IPL-best figures of 4-16 in his four overs.

Never is it easy to go into a match against a team who leads 15-5 in all games across a certain tournament; ask the Kolkata Knight Riders who were dismantled in the first innings by the Mumbai Indians. The venue was Bengaluru yet again, which witnessed a batting heavy Sunrisers Hyderabad crawl to 128 against the Knight Riders in the Eliminator.

On Friday evening, however, KKR were on the receiving end, as table toppers Mumbai Indians handicapped their opponents allowing them just 107 runs on the board. The architect of the vice-like grip that MI had over the Knight Riders was leggie Karn Sharma. He finished with IPL-best figures of 4-16 in his four overs.

Keeping a spinner like Harbhajan Singh on the bench, who has done spectacularly well for the Mumbai Indians this year, is in itself a big achievement for a bowler. Karn Sharma had already picked up 9 wickets from the 7 games he’d played this season, which meant Bhajji couldn’t squeeze into the team despite his fine performances. On the big night, Karn put his hand up for skipper Rohit Sharma, and delivered his best spell in the IPL.

Karn strikes inside the Powerplay

Given the fact that Sunil Narine had decimated fellow teammate and leggie Samuel Badree in the same venue, Karn Sharma would have been under immense pressure running in at him, especially inside the Powerplay. But this time, the leg-spinner had the last laugh. Narine gleefully accepted Karn’s invitation to step down the track, only to see Parthiv Patel whip the bails off when he was outside the crease. As Kolkata were in serious trouble at 31-3, Karn made things worse for them by removing skipper Gautam Gambhir. This one was flighted as well. Gambhir tried to whack it into the stands, but managed to find a safe Hardik Pandy at deep-midwicket.

In came Colin de Grandhomme, who had a big responsibility on his broad shoulders. Karn, however, made sure the Kiwi had no contribution whatsoever, dismissing him for a golden duck. Nigel Llong didn’t have the slightest hesitation to raise his finger. The ball came on with the arm and struck de Grandhomme plumb in front o the leg. At the end of the 7th over, KKR’s chances of crossing the 100-run mark were looking bleak as the scorecard read 31-5. Meanwhile, Karn Sharma had bowled 2 overs, given away 8 runs, and bagged 3 prized scalps.

The final blow by Karn Sharma

Just as Ishank Jaggi and Suryakumar Yadav were beginning to steady the Knight Riders’ ship, Karn Sharma interrupted once again. He snuffed out Jaggi just as he was looking good to tee off. Under the circumstances, Jaggi was beginning to look dangerous with his 31-ball 28. The batsman was cramped for room and hit it straight to Mitchell Johnson at long-on who took a fine catch jumping up. The leg-spinner finished off with exceptional figures of 4-16, to partly ensure his team would meet arch-rivals Rising Pune Supergiant in the all-important final.

At the halfway mark, Mumbai Indians were easily the favorites to set up yet another Maharashtra Derby on Sunday. KKR had slipped in a crunch situation, and Mumbai’s Karn Sharma had engineered the collapse. Despite a few hiccups on the way, the Mumbai Indians were comfortably home. It is the end of the road for the Kolkata Knight Riders. As for Karn Sharma and the Mumbai Indians, they will be on their way to Hyderabad on the first flight out of Bengaluru. They’ll be carrying great confidence from this game as they face their nemesis of this season. Meanwhile, Karn Sharma will also be carrying his CT Player of the Match award he picked up this evening for his fine performance. 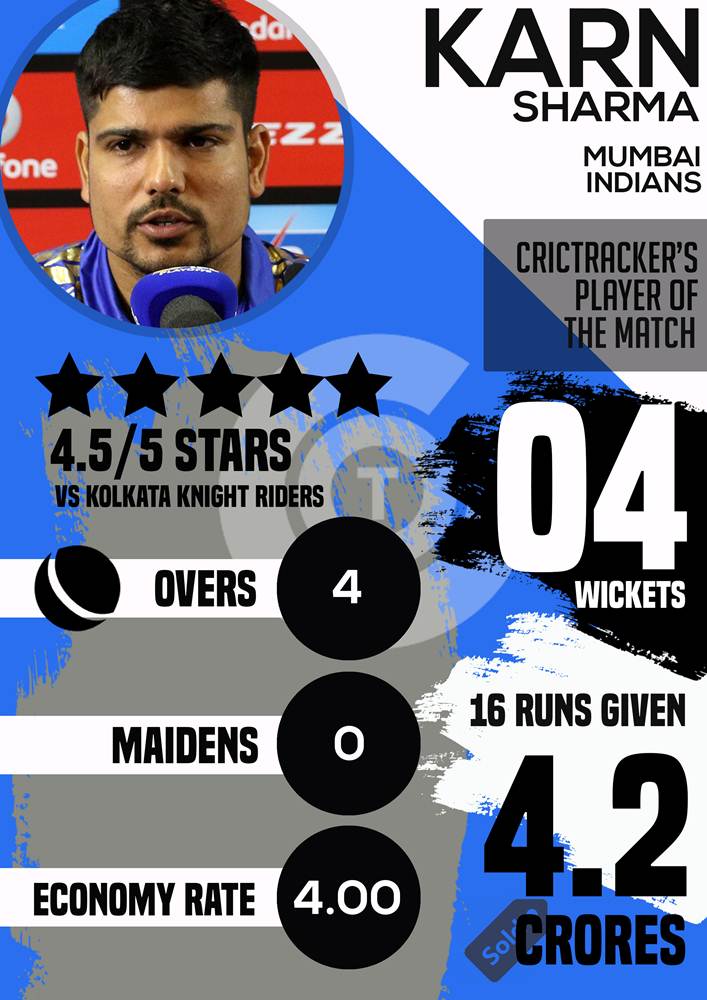