Kolkata bagged their third straight victory defeating the Delhi Daredevils by 4 wickets and with an over to spare.

Both Kolkata Knight Riders and the Delhi Daredevils came into this match with two back to back wins in their bag. And quite obviously, both of them would have liked to have continued their winning momentum going into the next game. But there could be only one winner at the end and it was the Kolkata Knight Riders who emerged victorious, courtesy to a brilliant effort by Manish Pandey.

Delhi won the toss in the match and opted to bat first at home. They put up a decent total of 168 runs on the board as brilliant efforts from Sanju Samson and Rishabh Pant with the bat eased the pressure of the others. Rishabh Pant, however, was the star as far as the Delhi batting is concerned as he struck the ball brilliantly en route to his 38 off 16 balls.

Kolkata Knight Riders, in their run chase, were a bit shaky at the start as they lost three quick wickets up front including that of their captain Gautam Gambhir who has been in brilliant form this season. But Yusuf Pathan and Manish Pandey were not to be intimidated by the situation as they played brilliantly to see their team home in an encounter that went right down to the wire.

Having Said that Manish Pandey is Crictracker’s player of the match.

Manish Pandey, who has been scoring runs at ease this season came into bat in a situation which was a test of his nerves. But the youngster did not show any sign of hesitation as he planned his innings beautifully, much to the joy of the Kolkata Knight Riders supporters. His franchise was struggling at 19/2 when the 27-year-old walked out to bat and held the innings together with veteran Yusuf Pathan who supported him equally well.

Pathan himself scored 59 runs off 39 balls striking the ball all round the park which took off the pressure of the youngster. But Manish kept the scoreboard ticking and stayed there on the crease till the last even as Pathan lost his wicket at a crucial stage.

Saw his team past the finish line

After Pathan got out at the crunch situation, it required a lot of character and hard work to see the team past the finish line. But Manish was intelligent enough to not give away his wicket taking unnecessary risks. He rotated the strike well first with Suryakumar Yadav and then Chris Woakes inching closer to the target.

The match then went down to the last over as Kolkata required 9 runs to earn their third straight victory. Chris Woakes missed the first delivery and got out stumped in the second, leaving his team in a huge spot of bother. However, Sunil Narine then did well to give the strike to Manish Pandey, who hit Amit Mishra for a huge six off the next delivery. As a result of the mind-blowing six, KKR needed just two runs off the final two deliveries. Pandey quite intelligently placed the ball in the gap and completed the final two runs with ease, giving his team the much-needed victory.

Manish Pandey gets 4.5 stars out of the possible five for his match winning innings against the Delhi Daredevils. 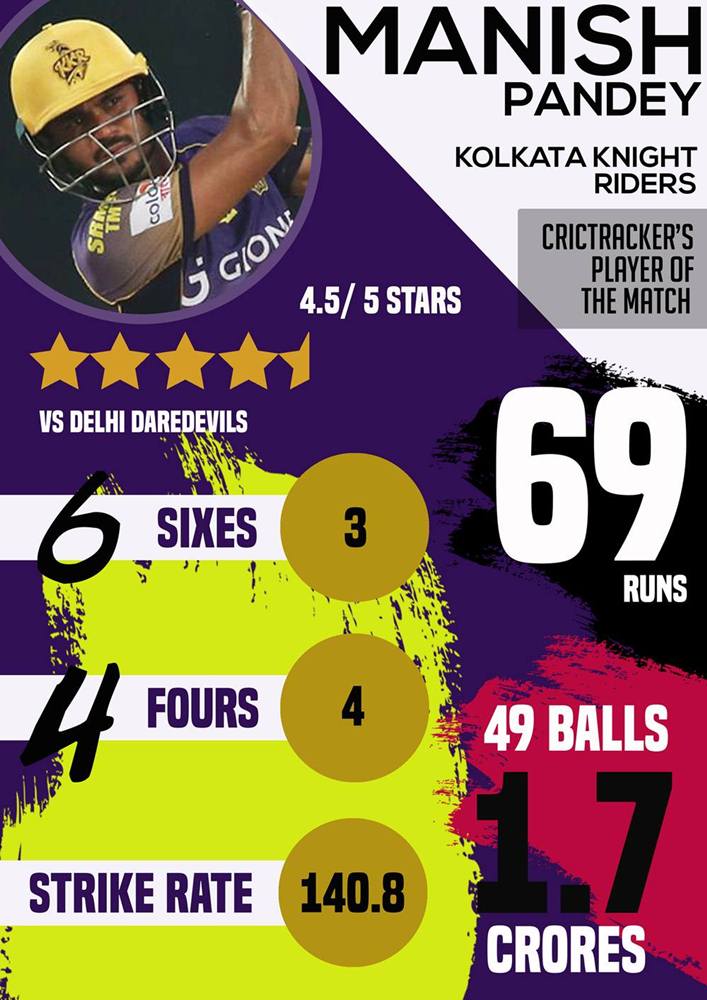