Bhuvneshwar Kumar's career best 5/19 paved the way for a tight 5-run win for the Sunrisers Hyderabad.

Sunrisers Hyderabad renewed their dominance at home when they went past a spirited performance by Kings XI Punjab by 5 runs. It was a see-saw battle between these sides as Manan Vohra played one of the best innings of the IPL scoring a stroke-filled 95 which came off just 50 balls. At the end, the difference, as often it is, was Sunrisers strong bowling unit.

Defending a par score of 160, Sunrisers were backing their bowlers to deliver for the umpteenth time since 2016. And so they did, led by a magnificent display of fast bowling from Bhuvneshwar Kumar, who won the game for his side with a career best 5/19. This was Bhuvneshwar’s first five-wicket haul in T20 cricket and he also picked up his hundredth IPL wicket when he removed Manan Vohra in his final over to seize the game for his side.

Due to Ashish Nehra’s omission, Bhuvneshwar Kumar had the added responsibility of leading the SRH attack today. The only way SRH could force a win was by picking wickets upfront and Bhuvneshwar struck on the first ball of the innings sending the experienced Hashim Amla back to the pavilion. He struck again in his next over when he got the better of the dangerous Maxwell. Two wickets in two overs pegged Kings XI’s chase back as they lost their both overseas dashers to some crafty bowling of Bhuvneshwar. He swung the ball and bowled at a good pace as the batsmen struggled to get him away. His figures after the first spell read 2-0-7-2. Warner quickly took him off the attack and introduced spin straightaway.

The game ebbed and flowed in the middle overs. The Afghani duo of Mohammed Nabi and Rashid Khan were instrumental in keeping the batsmen under check. But due to Vohra’s innings, Punjab slowly started getting back in the game. When they threatened to take the game away from the home team, Warner was quick to turn to Bhuvneshwar.

As a result of 2 costly overs where Punjab smashed 41 runs, Punjab were on the brink of winning it as the equation was down to 35 off 24 balls. Bhuvneshwar came in and immediately sent Mohit Sharma back off the second ball of his second spell, breaking the 45-run partnership for the 7th wicket which came off just 16 balls. He would have had Vohra two balls later had Shikhar Dhawan not spilled a relatively straightforward chance at deep cover. When Kumar headed to bowl his last over, which was the 19th over of the innings, Punjab were within striking distance, needing just 16 from 12 balls with 3 wickets in hand.

Bhuvi, as he is famously called as, knew that he had to deliver those yorkers. He was on the money first ball, as Cariappa played all around an in-dipping yorker which castled his stumps. Sunrisers weren’t out of danger yet, as Vohra was at the non-striking end batting on 95 and striking them purely. Ishant’s first ball single got Vohra on strike and it all came down to the contest between Bhuvi and Vohra. Kumar’s experience had the final say as he trapped Vohra in front with another pinpoint yorker which eventually won Sunrisers the game.

The beauty about Kumar is, he has always performed at crucial phases in the game. He takes wickets with both new, as well as the old ball. He has added a couple of yards of pace and is deadly accurate with the yorkers at the death making him an invaluable asset for Sunrisers.

His maiden 5-wicket haul in T20 means that he is the CT Player of the Match with a 5 on 5 rating. 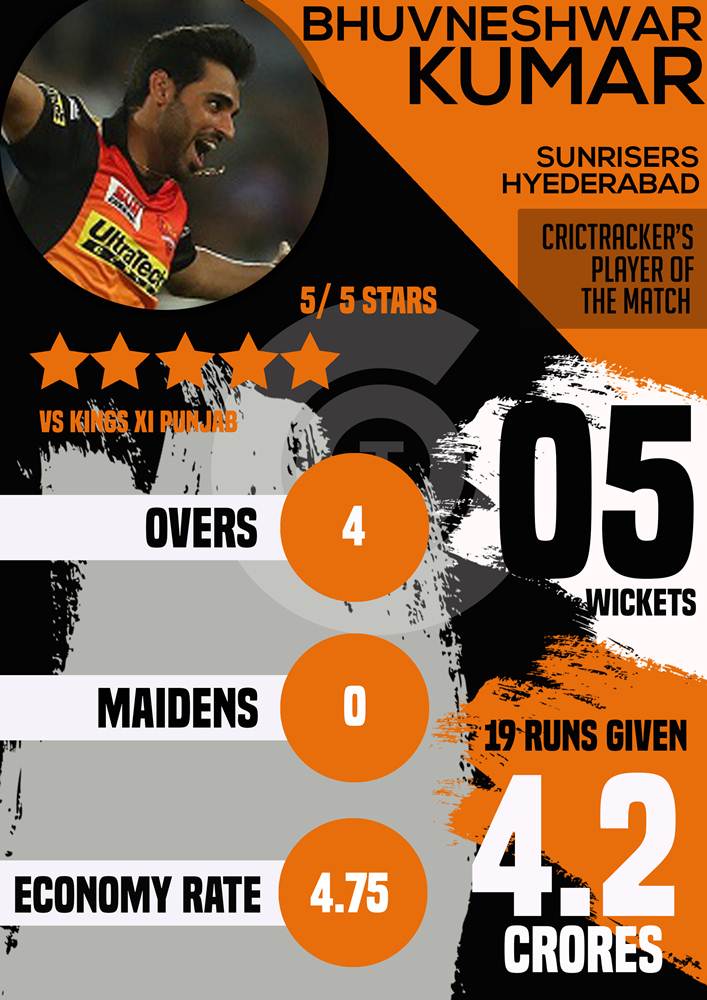