Rohit Sharma played the anchor role in the run chase and ensured he was at the crease till the very end in the game. Coming in to this game, the Mumbai skipper was not in the best of forms. He had only one fifty to his name in the tournament thus and a string of low scores to go along with it. Considering this fact, he was under immense pressure to perform.

The veteran Indian batsman not only managed to silence all his critics but also helped his side cruise past the target. As long as Rohit was going to be there at the crease, even the opposition knew they had no chance in the match. For his unbeaten 57 off 36 balls, Rohit Sharma is the CT Player of the Match.

The form of Rohit Sharma had been under the scanner ever since he came into the tournament. Having come from an injury lay-off, he looked rusty in the first few appearances for the team. Needless to say, the fans and the team camp were worried about his form. He got a string of single-digit scores in the first 4 matches of the season. What needs to be noticed is the fact that the spinners accounted for his dismissal.

On most occasions, it was the leg-spinner that bothered the Mumbai Indians skipper the most. Even in the recent fixture against the Gujarat Lions, he was seen struggling against the leg spin of rookie uncapped cricketer Ankit Soni. In this game, he was going to be up against one of the top leggies of the tournament – Yuzvendra Chahal. Rohit made a mark by stamping his authority on the bowler and negotiated him well in the match.

Rohit Sharma walked in to bat in the 8th over of the match. It was the dismissal of Jos Buttler that brought Rohit to the crease at the number 4. MI were placed at 61/2 in 7.3 overs when he had arrived at the crease. He lost the support of Nitish Rana soon enough as well. Hence, it would not be wrong to say that the specialist batsmen were already back in the hut from the other end.

The departure of Kieron Pollard even before the 100-run mark was achieved only made things worse for the Mumbai Indians. However, Rohit kept a good watch at the proceedings. He planned the run chase with utmost perfection. He took his time to settle but ensured that the run flow never ceased from his end. This helped the team to avoid any kind of pressure creeping up to them in the match.

Mumbai Indians were stuck in the same situation that they were in during their match against the Rising Pune Supergiant. Things looked identical when Rohit Sharma was batting on a score of fifty-plus. However, in that fixture, Rohit failed to take the team home. This time around, he ensured that he did not throw his wicket away in the final over.

He remained unbeaten on 56 off 37 balls with 6 fours and a six to his name as Mumbai chased 162 in 19.5 overs with 5 wickets in hand. The masterly knock from Rohit Sharma now sees the Mumbai Indians sit comfortably at the top of the points table. 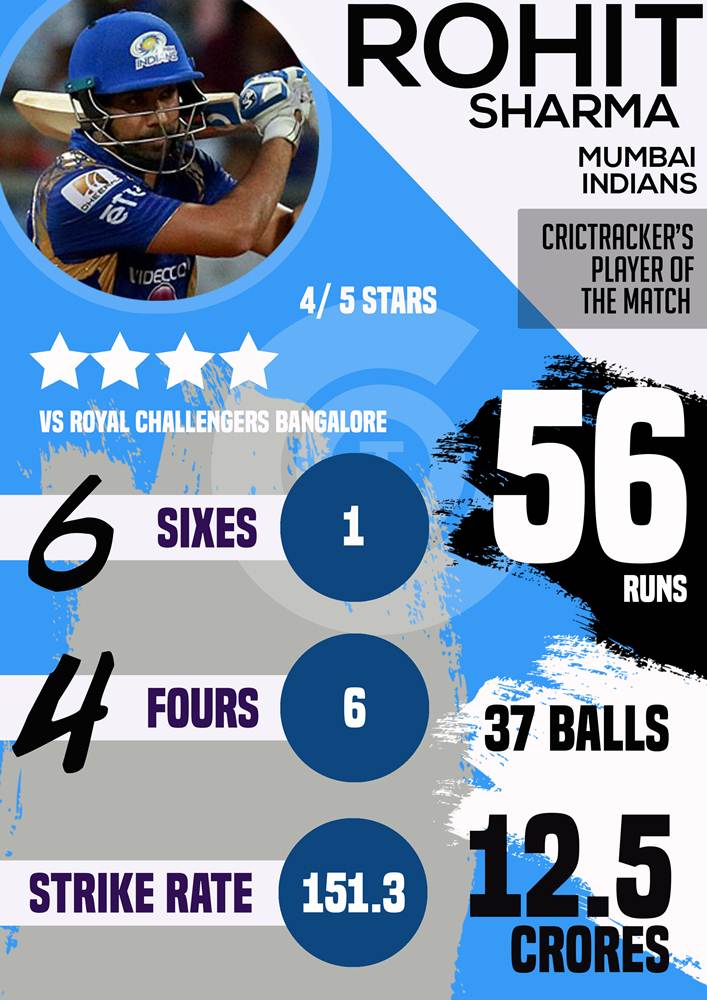