After a close fought contest against Chennai Super Kings, they now have to face the wrath of the Sunrisers Hyderabad.

The Kings XI Punjab have had a shaky start to their 2018 campaign, but one thing about them which scares the opponents is their top order. KL Rahul has been accumulating runs for fun and the arrival of Chris Gayle has got Punjab going in the right direction. After a close fought contest against Chennai Super Kings, they now have to face the wrath of the Sunrisers Hyderabad.

Sunrisers have looked ominous in every department and despite their batting unit not really clicking well, they are winning games thanks to their mind-boggling bowling set up. It will be a big task for Ravichandran Ashwin and his troops to get the better of this highly spirited unit and Mohali crowd will certainly turn up in big numbers to help their side register a big win.

Not many changes are expected in the lineup for this game but Axar Patel might be back in the XI to replace Barindar Sran. The likes of Gayle and Aaron Finch might keep their place as well. Here’s the predicted XI for the Punjab franchise for this big game.

An all-time great in cricket history, Chris Gayle has bossed the T20 format so graciously over the last decade that people hail him the King of this format. In the previous game, he played a sensational knock, spanking the bowlers to all parts. Despite the age factor going against him, he is still as good as any on the circuit.

KL Rahul has rediscovered a new version of himself. The youngster is bludgeoning big sixes without smashing the ball too brutally. His classy wrist work and amazing timing are helping him compete with Gayle as far as swift accumulation of runs is concerned.

Mayank Agarwal is due to a big knock for the Kings XI Punjab. The Karnataka opener had a terrific domestic season and is yet to reflect that form in the elite lucrative league. Karun Nair stroked a fifty in the first match and helped his side finish the game on a strong note against the CSK. He’s always a valuable addition to the side.

Senior cricketer Yuvraj Singh’s rough patch is continuing. The veteran southpaw is yet to deliver a power-packed performance which the fans expect from him. Another disappointment for the Punjab franchise has been Aaron Finch’s form, but he might be getting a few more opportunities considering his domestic form of late.

Axar Patel will be back in the XI to replace Barinder Sran. The young all-rounder was retained by the Kings XI Punjab and they’re expecting a high-quality performance from him. He was a tad expensive in the first two games and will be eager to put up a good show on Thursday.

Skipper Ravichandran Ashwin batted at number 7 in the previous game with Axar coming back into the XI, he might slip again to the number 8 spot. He’s in the lineup predominantly for his bowling and just the way he did in the previous match, he always rises to the occasion when the team is in trouble.

Young talent Mujeeb Zadran is showcasing his talent on the biggest platform possible for a youngster. He has been outstanding thus far, picking up some very big wickets already. The batsmen are finding it difficult to read him and Ashwin will have to use his 4 overs judiciously.

Mohit Sharma is being a little expensive in the Powerplay, but in the death overs, he’s always lethal. He prevented MS Dhoni from reaching the target in the final over last match and will be keen reflect the same form in the early overs as well. Andrew Tye needs to control the flow of runs or else he might face a sacking very soon.

Here is the predicted XI for the game against SRH 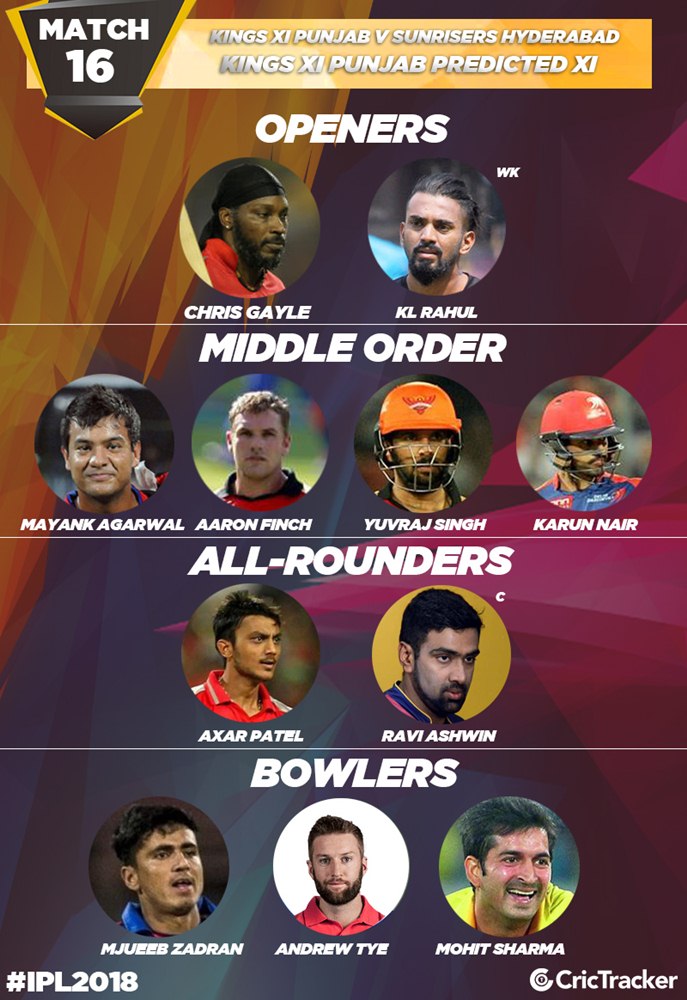