The Super Kings will be making their comeback in the grand scheme of things after a 2-year hiatus.

The IPL carnival is back in town and the excitement of the fans is reaching another level with the kick-off of IPL 11 just a little more than 24 hours away. The reigning champions Mumbai Indians will host the arch-rivals Chennai Super Kings at the Wankhede Stadium tomorrow evening in Match 1 which is easily one of the most anticipated encounters of the tournament.

The Chennai Super Kings are returning after a 2-year gap and being the IPL heavyweights that they have been over the years, they will be keen to make a statement straight away. Mumbai Indians also will want to pick up from where they left off last season and put on a show in front of the home crowd to set the stage ablaze and get themselves on track for another successful run.

The Wankhede Stadium is generally a flat track and it offers a decent amount of carry. The ball comes onto the bat nicely and those who like to hit their shots on the up enjoy themselves to the fullest at this venue. The dimensions of the boundaries are small too, both straight as well as square of the wicket, which further adds to the misery of the bowlers.

There might just be a little bit of turn in the deck and if that’s the case, the spinners will have a chance to make an impact as it turns with fizz and bounce at Wankhede as opposed to the slow turn at most of the other grounds in India. However with the game starting at 8 pm and the dew taking effect very early in the game, controlling the lengths with the wet ball will be a challenge for the spinners.

Toss will be vital and the captain with the fall of the coin in his favour will like to bowl first as defending the score under the extreme batting conditions will be an incredibly tough task.

Mumbai’s overseas quartet will be Evin Lewis, Kieron Pollard, Akila Dananjaya and Mustafizur Rahman. Lewis will open the batting alongside Ishan Kishan followed by Rohit Sharma at 3, Surya Kumar Yadav at 4 and Pollard, Krunal Pandya and Hardik Pandya at 5, 6 and 7 respectively.

The Indian specialist bowlers for Mumbai, along with the overseas picks Mustafizur and Dananjaya, will be Jasprit Bumrah and Pradeep Sangwan and the 5th bowler’s quota will be filled by the Pandya brothers. While Bumrah will be the trump-card for the hosts, they will look up to Sangwan for a couple of early breakthroughs with the new ball as the left-armer is capable of swinging the ball upfront at a fair clip.

For Chennai, the four overseas names will be Shane Watson, Dwayne Bravo, Imran Tahir and Mark Wood. Watson will be slotted at the top of the order to partner Murali Vijay, while Suresh Raina, Kedar Jadhav and MS Dhoni at 3, 4 and 5 will form the core of the middle order, with the onus of finishing the innings being put on the shoulders of the all-rounder duo of Dwayne Bravo and Ravindra Jadeja.

The X-factor for Chennai with the ball will be Mark Wood and Imran Tahir. They will be the strike bowlers, while Harbhajan Singh and Shardul Thakur will be the support-cast as they will be entrusted with the job of bowling tight and providing a bit of control in the middle phase of the innings. Dwayne Bravo will be the 5th bowler and will be MS Dhoni’s main man in the death, with Watson possibly being the 6th bowling option for the skipper.

Mumbai’s batting is heavily reliant on Rohit Sharma and Evin Lewis up top and Hardik Pandya down bottom. Ishan Kishan is walking into the tournament on the back of some good form, but he is fairly inexperienced and somebody like a Surya Kumar Yadav or a Krunal Pandya hasn’t had a great time in the domestic circuit in the recent past. Kieron Pollard hasn’t played much cricket of late and he might be a bit rusty to start with as well.

CSK, on the other hand, doesn’t rely on specific individuals as far as batting is concerned. They are a much more compact and balanced batting unit. Thy lack power in comparison to Mumbai, but they have plenty of skills and experience through the line-up.

Talking about the bowling of the two sides, Mumbai seems to have a better pace attack with the likes of Mustaifizur and Bumrah in there. However, when it comes to spin, CSK is a tad ahead as there is a lot of variety in their spin department with a world-class wrist spinner in Tahir, a wily off-spinner in Harbhajan and a left-arm spinner in Jadeja.

The prediction is for the Chennai Super Kings to beat the Mumbai Indians in a thriller and start their campaign with a bang. 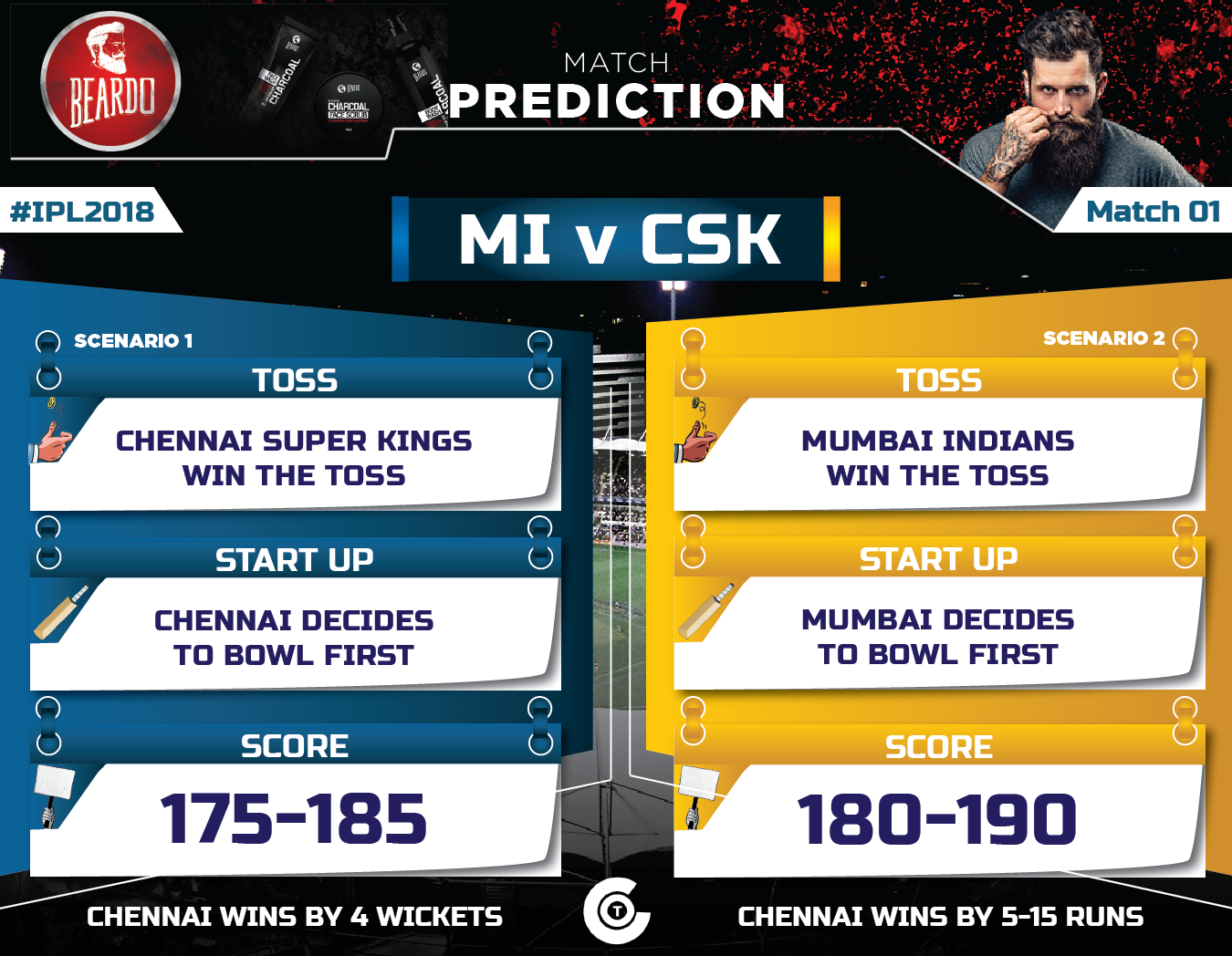