The Knight Riders have stuttered in their last two games.

Kolkata Knight Riders (KKR) and the Delhi Daredevils (DD) will be pitted against each other at the Eden Gardens in Kolkata. The Daredevils started with a couple of defeats but came back strongly against Mumbai Indians. On the other hand, the Knights have slumped to back to back defeats after winning their opening game against Bangalore.

As far as the Knights are concerned, they have lost the plot in the last couple of games and have experimented with their lineup way too much. With not too many choices available, they need to find their right combination at the earliest. In our article, we take you through the probable lineup that might take the field on Monday.

Chris Lynn and Sunil Narine are most likely to return to the opening stand in the upcoming game. Sunil Narine wonderfully in the first couple of games where he smashed the ball to all corners of the ground, which enabled the Knights to get off to fliers on both occasions. However, he was set in the middle order and he floundered to make any sort of impact.

Chris Lynn has started to find his form after a couple of indifferent games against Bangalore and Chennai. Though he couldn’t accomplish his half-century but ensured that the Knights get off to a decent start against the Sunrisers Hyderabad. The Knights would hope for him to sustain his touch against the Daredevils as well.

The middle-order hasn’t quite blazed away thus far in the tournament. Nitish Rana has looked good in patches but hasn’t quite been able to convert the starts into a significant score. Robin Uthappa has strained thus far and hasn’t lived up to his potential. Both Rana and Uthappa have to get the big scores in order for the Knights to build pressure on the opposition.

Dinesh Karthik has chipped in with some useful knocks, however, they haven’t been enough to guide the Knights to safety. The skipper needs to find the boundaries a bit more often to ensure that the run rate doesn’t drop much. Shubman Gill might be promoted above Andre Russell in the batting lineup.

Andre Russell has blown a tad hot and cold in the three games. While he has been stupendous with the willow against the Chennai Super Kings at the Chepauk, he hasn’t displayed the same venom in the other games against Bangalore and Hyderabad respectively. Against the Sunrisers, he took charge when the Knights required someone to anchor the innings.

However, he went berserk from the outset and gave his wicket away in an attempt to up the ante. Also, with the leather, he hasn’t been able to make inroads into the batting lineups. The Jamaican all-rounder has to get his act right against Delhi’s fiery lineup, both with bat and ball.

The bowling contingent fought hard against the Sunrisers, but they didn’t have enough runs to work with. Shivam Mavi made his IPL debut and generated some decent pace, though he was a tad erratic in their line and lengths. Mitchell Johnson and Andre Russell tried hard as well without much luck. The Pacers would be looking to bring forth their A-game against Gautam Gambhir’s men.

The spin trio of Sunil Narine, Piyush Chawla, and Kuldeep Yadav churned out some excellent deliveries to keep the runs in check. Narine was stupendous and kept the batsmen in check for a significant time period. The spinners will be required to dish out similar performances in the next match as well.

Here’s the KKR predicted XI for the game against DD 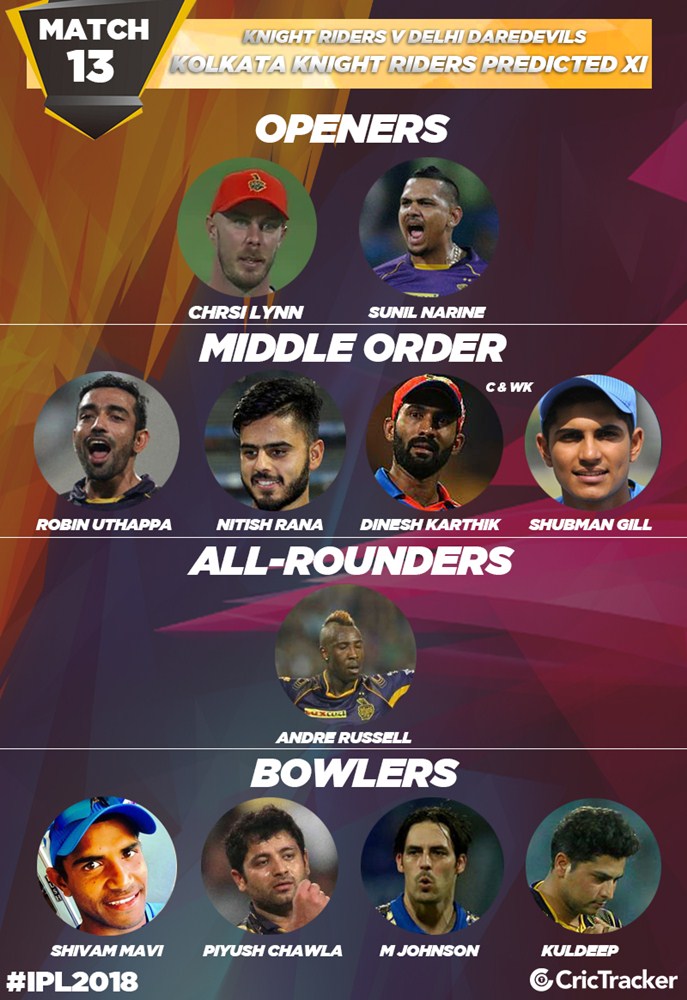