RCB have been blown away by Sanju Samson in their erstwhile game at the M.Chinnaswamy Stadium in Bangalore.

Both Royal Challengers Bangalore (RCB) and Mumbai Indians (MI) are languishing at the bottom half of the table. Mumbai have been excellent in patches, but unfortunately, have slumped to defeats on all three occasions after getting their opponents by the scruff of the neck on every single occasion. RCB have had a topsy-turvy season as well.

Albeit they have won against Kings XI Punjab, the fact that they have been erratic can’t be denied. Virat Kohli’s men had a horrendous campaign last time around and they aren’t looking in great shape this season either. They will be desperate to string together some wins and climb the ladder. In our article, we take you through their probable playing XI against Mumbai at the Wankhede Stadium.

Brendon McCullum and Quinton de Kock are mostly to open the batting for the Challengers. Brendon McCullum has been in indifferent form in the last couple of games. He had a blistering start against the Kolkata Knight Riders (KKR), but faltered against the Rajasthan Royals where Krishnappa Gowtham accounted for his dismissal. Even Axar Patel got the better of him in RCBs second game.

Quinton de Kock has picked up form as the games have progressed. Piyush Chawla dismissed him cheaply in their opening game. Nevertheless, he played a couple of useful hands against Punjab and Rajasthan respectively. Against, Ravichandran Ashwin’s men, he played a patient hand followed by a quick-fire knock against the Royals.

The middle-order has delivered thus far in the tournament. Virat Kohli scored runs against KKR and Rajasthan, but didn’t look convincing. However, he gained back his stupendous touch against Ajinkya Rahane’s men and notched a breezy half-century. AB de Villiers dished out a couple of stupendous knocks against the Knights and Punjab.

Rajasthan Royals finally managed to get the better of him early as Shreyas Gopal, the young leg-spinner, nipped out his wicket. Mandeep Singh has shown the ability to bludgeon the bowling from the outset and performed well thus far in the middle-order and RCB would be banking on him to propel their score.

Pawan Negi, who replaced Sarfaraz Khan in the playing eleven, also needs to step up. He floundered in the previous game, but his all-around abilities can’t be undermined by any means. Washington Sundar had an awful game against the Kolkata Knight Riders, but came back brilliantly with the leather against Punjab. Also, he telecasted his skills to find the boundaries which need to come forth for RCB as well.

Umesh Yadav has blown hot and cold in the series thus far. He bowled decently against the Knights and then ripped the heart out of the Punjab lineup by picking up three wickets of Aaron Finch, Mayank Agarwal and Yuvraj Singh in the same over. The spell, eventually, turned out to be a match-winning one for the Challengers as well.

Kulwant Khejroliya has been decent and though he has been taken for runs at stages, has shown heart and ran in every delivery. Yuzvendra Chahal has been disappointing in the first couple of games, but has managed to pick up a couple of wickets against the Royals, which included the prized wicket of Ben Stokes, the English all-rounder. Meanwhile, Tim Southee might replace Chris Woakes in the eleven.

Here’s RCB Predicted XI for the game against Mumbai Indians 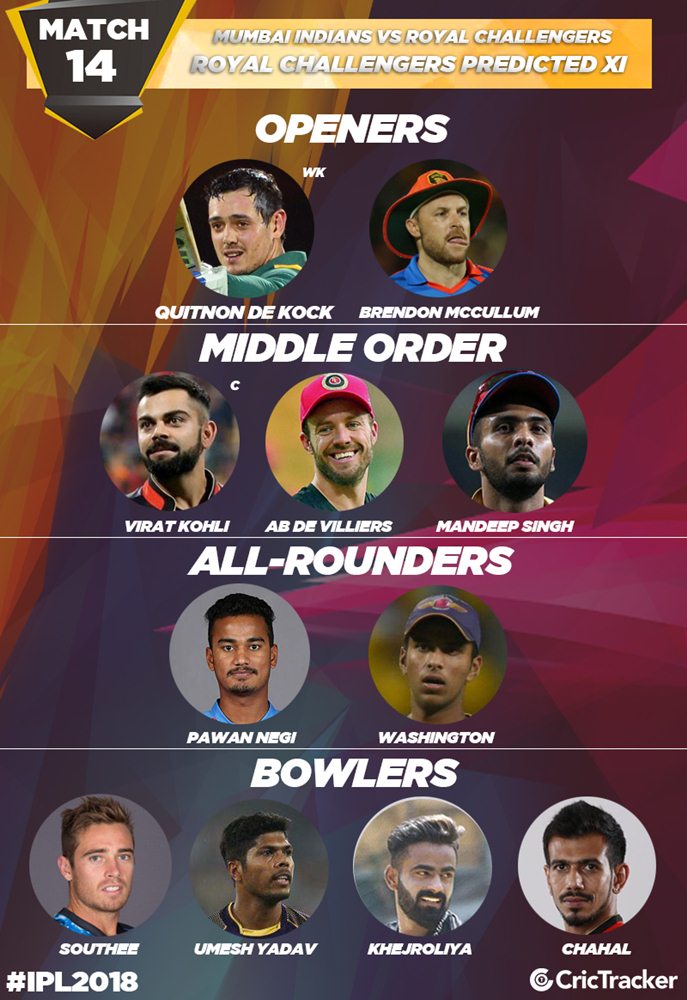