Chris Gayle batted 63 balls for his 104-run knock that included only one four but 11 sixes.

It needed a Chris Gayle special to stop the Sunrisers Hyderabad’s winning streak in the 2018 season as the big man hit an unbeaten 104 against a side which didn’t concede a 150+ total in their first three matches. His ever-improving tally of centuries in the T20 format extended to 21 to help Kings XI Punjab to make it three out of three in Mohali. The one-dimensional SRH’s batting failed to achieve the required run rate as they made 178/4 but ended 15 runs short of KXIP’s total.

Chris Gayle batted 63 balls for his 104-run knock that included only one four but 11 sixes. Thus, he became the first player to hit ten sixes in an innings for KXIP and also the first to hit ten sixes against SRH. Gayle’s innings was valued at 1.155 crores as per the CricTracker’s player value algorithm. KXIP bought Gayle for his base price of 2 crores at the auction but the West Indian nearly covered those with his first two games of the season. SRH’s keeper Wriddhiman Saha turned out to be the liable player with only six runs to his name in the game. 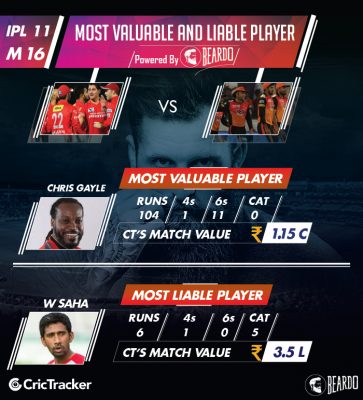 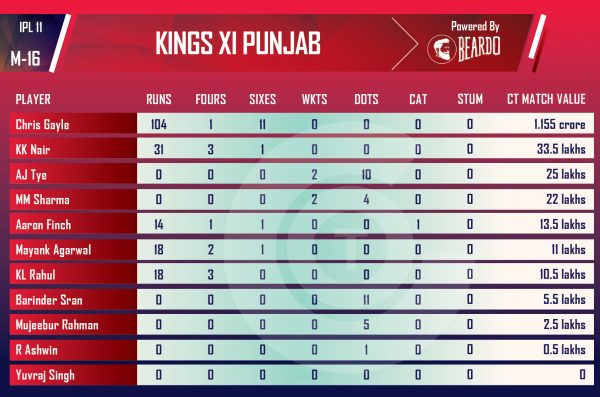 KXIP’s local player Yuvraj Singh turned out to be the only player without a value in the game. The all-rounder didn’t get a chance to bat or bowl in this game. Ashwin returned with only 0.5 lakhs from the game as he bowled only one dot ball in the four overs he bowled. Shikhar Dhawan valued 5 lakhs with the catch he took on the field as he returned to pavilion injured after facing only one ball. 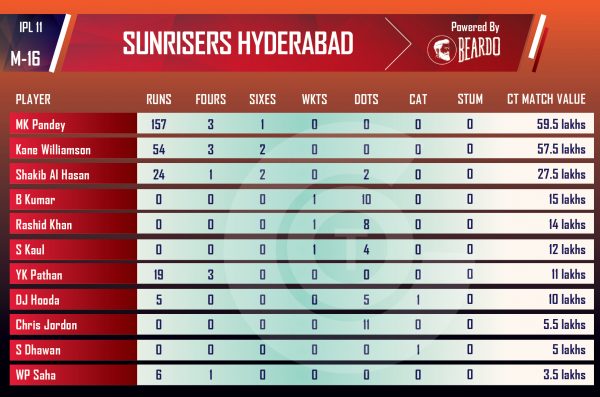