DD tried their best to make a comeback in the match, but KL Rahul, blitzkrieg was enough to make the lasting impact.

The Indian Premier League (IPL) set the stage on fire right away on the first day itself as the fan witnessed a cliffhanger at the Wankhede Stadium. Chennai Super Kings (CSK) edged out Mumbai Indians (MI) in a thriller by just 1 wicket. While the opening game was not enough to create the buzz of the tournament, the excitement went to another level as KL Rahul literally demolished the records by scoring the fastest fifty in the history of the cash-rich T20 league.

Rahul opened the innings for Kings XI Punjab as they aimed to gun down the chase of 167 runs in Mohali. Though what followed was absolute mauling of the bowlers as he literally annihilated the bowlers of Delhi Daredevils (DD). He took the special liking to Amit Mishra, the leg-spinner, by smashing 24 runs in a single over to bring up his half-century with just 17 balls into his team’s innings. Even this was the record as he became the first player to race past the 50-run mark before the fourth over in the grand history of the IPL.

However, soon after Rahul’s dismissal, it was Karun Nair who took the game under his control and scored at almost the same pace by taking full advantage of the shell-shocked Delhi bowlers. His shot selection was absolutely flawless as well. His favourite bowler of the day was Mohammed Shami as he smashed him for three consecutive boundaries. Nair backed up a strong domestic season with Karnataka and played a worthy of a knock.

Gautam Gambhir celebrated the return to his home franchise and scored a brilliant half-century leading from the front for his side. He opened the innings for Delhi and reminded everyone of his best days. His trademark inside-out shot was played numerous times as the crowd acknowledged a superb knock from the veteran.

Mujeeb shines on his IPL debut

Earlier, Mujeeb Zadran became the youngest ever player to feature in the history of the IPL when he was handed the debut by KXIP side. He didn’t disappoint and scalped the dangerous and the top T20I batsman Colin Munro in his very first over. Moreover, there were no over the top celebrations from him and concentrated on continuing to ball with the same venom. He also sent back Rishabh Pant who was threatening to take the game away from the home side. He eventually returned with the brilliant figures of 2/28 after four overs.

Delhi bowlers tried their best to make a comeback in the game but KL Rahul’s blitzkrieg was enough to make the lasting impact on the game as they won it by six wickets pretty easily.

Here’s CricTracker’s Rating of the match: 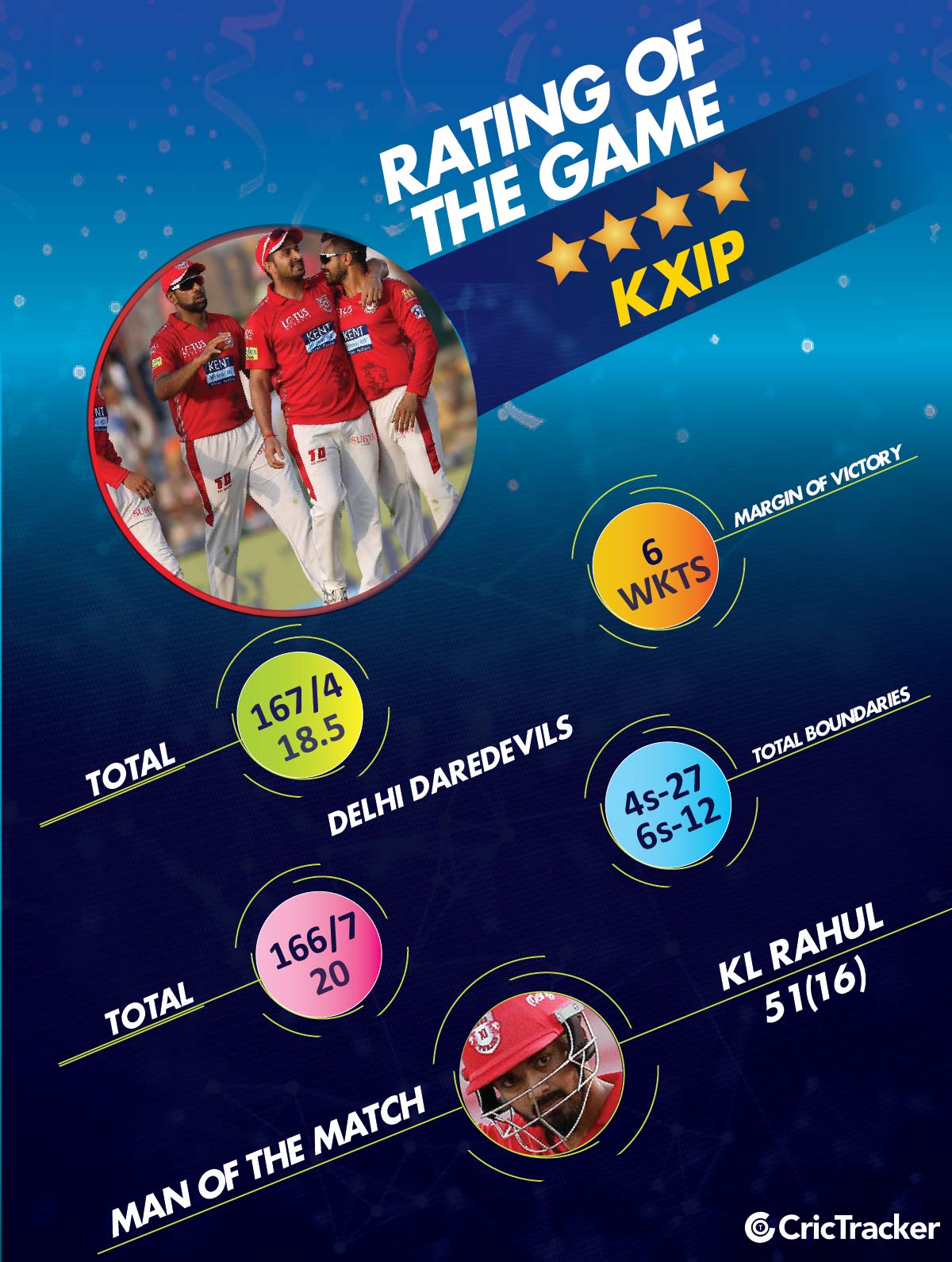 Don’t miss any news in and around ‘cricket’, stay updated with CricTracker.com