Rayudu played a defining innings which proved to be match-winning in the end.

It was yet another humdinger of an encounter between Sunrisers Hyderabad (SRH) and Chennai Super Kings (CSK) and the latter side prevailed once again. While it was Ambati Rayudu for the visitors who just smoked the ball all around the park, Kane Williamson just lightened up Hyderabad with a pleasant masterclass. Even Deepak Chahar made a lasting impact with a brilliant spell of 3/15 in his four overs. However, CSK had more experience up their sleeves in the end and once again won the last over thriller in this season to go top of the table.

Ambati Rayudu has been used as a floater in this CSK line-up so far and he has responded extremely well so far. He opened in the first few games along with Shane Watson and then was moved to number 3 in the absence of Suresh Raina. He was pushed further down to number 4 against SRH at his home ground. The result is he has scored 201 runs so far at a strike rate of 160.28 and an average of over 40 which is simply amazing.

CSK have found their new or rather better version of Subramaniam Badrinath it seems. Rayudu came out to bat with his team in all sorts of trouble and score reading 32/2 in the 8th over. The very second delivery he faced in his innings went for four which was well tossed up by Rashid Khan as he slogged it over mid-wicket. The shot got him going and the runs suddenly started to flow for the visitors.

The run-rate started going close to 6 which looked like a distant dream for CSK a little while ago. He got his eye in then and started opening his arms and all the shots were excellent. He was simply magnificent on the day as he shuffled across the crease nicely and played some breathtaking strokes. No bowler was able to get his wicket and finally a mix-up with his partner Suresh Raina proved to be his undoing and the masterclass from the local boy was ended on 79 with 9 fours and 4 sixes.

Kane Williamson came out to open surprisingly for Sunrisers as Wriddhiman Saha was pushed down the order in a tall chase of 183. The skipper got going from the word go after erroneously slow start from the hosts. He saw all the wickets falling from the other end but never lost his concentration and kept on playing his shots trying to keep up with the required run-rate.

While the match seemed finished after the wicket of Shakib Al Hasan, the arrival of Yusuf Pathan gave confidence to his skipper who started opening his arms freely. The 15th over proved to be the game-changing as the captain broke the shackles by launching an assault on Karn Sharma who was bowling well until then. Williamson smoked 3 sixes in that over and kept his team in the game big time.

The best of them was an effortless shot over long off. It was the third maximum of the over as Karn flighted the ball wide of the off-stump. But the batsman was up for it as Kane only extended his off-drive only to sail it over long off easily. However, the masterclass was ended unfortunately for the home side as Dwayne Bravo foxed him with a slower ball and the chances for them reduced considerably.

Though the last over thriller was won by CSK, Williamson and Yusuf Pathan won the hearts of everyone as they came back from nowhere in the chase.

Here’s CricTracker’s Rating of the match: 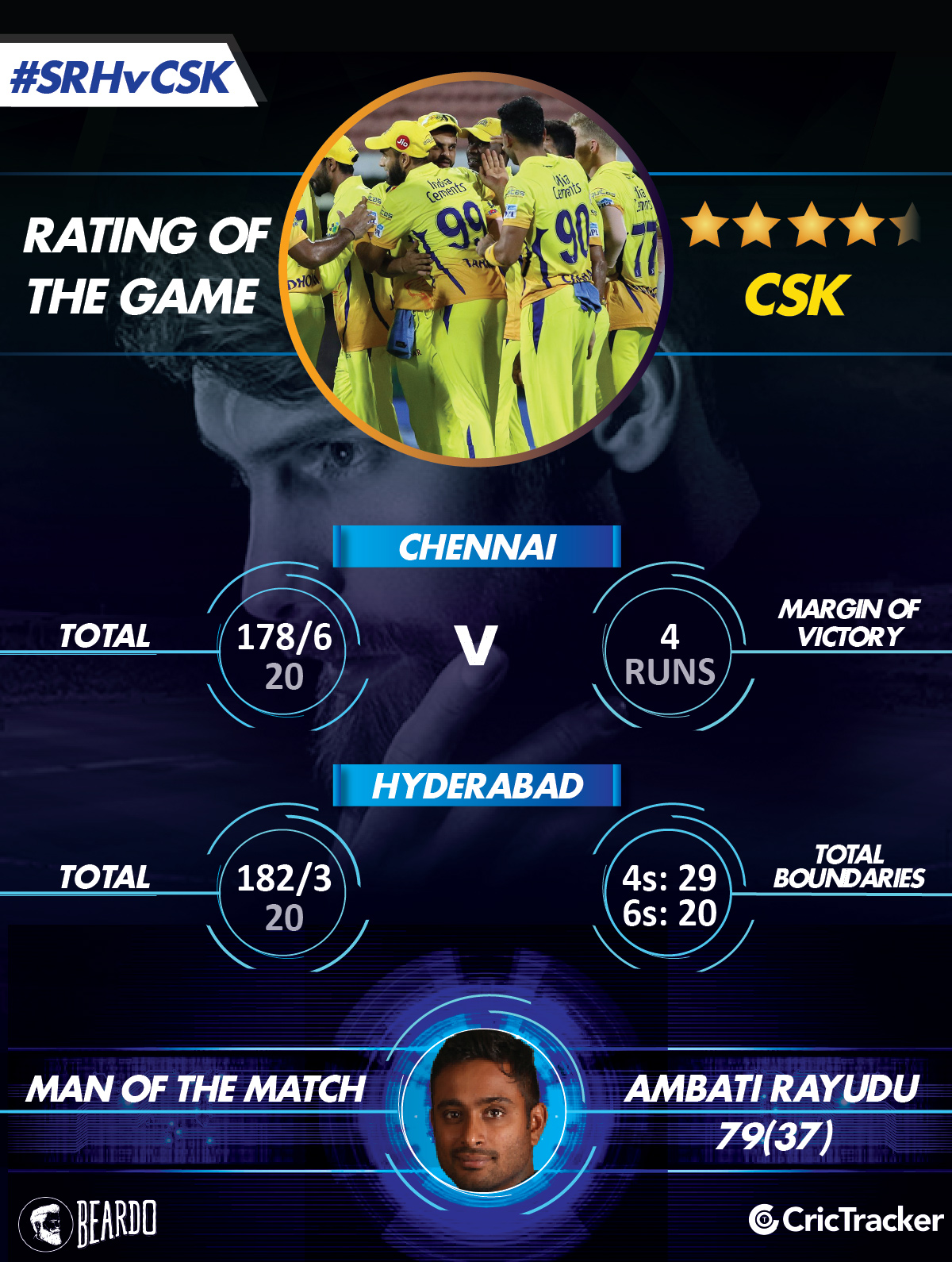