The Challengers have seemingly gotten their season back on track following the win over the Delhi Daredevils.

The Chennai Super Kings after conquering the Hyderabad fortress are now on their way to Bangalore where they will take on the arch-rivals RCB in match 24 of the on-going Indian Premier League (IPL) 2018. With two of India’s biggest superstars, Virat Kohli and MS Dhoni, in charge of the two sides, this is easily one of the most anticipated encounters of the tourney.

Royal Challengers Bangalore have had an indifferent run so far, as a result, they are positioned in the bottom half of the points table. CSK, on the contrary, have played with more authority and with 4 victories in 5 games, they hold the second spot. While the latter’s probability of qualifying for the playoffs is much higher, the momentum can shift dramatically at this stage of the tournament. So they won’t want to be complacent going ahead.

The Chinnaswamy pitch this season is playing better than it played the previous season. It’s still not the vintage Chinnaswamy as the ball is gripping a fair bit, but stroke-making is not impossible.

Also once it starts getting dewy towards the latter stages of the first innings, the ball skids nicely onto the bat making batting easier and with the slightly higher altitude of Bengaluru, the sixes disappear into the stands. Keeping the conditions in mind, the par score at this venue should be round about 175-180.

Corey Anderson has not been able to make a mark in the two opportunities he has got. He doesn’t seem to be a reliable option with either bat or ball right now and is all set to lose his place to his countryman Colin de Grandhomme who, on current form, will be more useful for RCB.

RCB tried Manan Vohra as the opening partner of Quinton de Kock last game, but the 24-year-old couldn’t register a big score to his name. However, it’s almost certain that he will retain his spot in the XI. Virat Kohli won’t lose his trust in the young man after just one failure and will, in all likelihood, give him another go.

David Willey’s skill-set in T20 cricket is higher than that of du Plessis even though the latter is a renowned name in the cricketing world. Willey is an explosive opener in the shortest format of the game and is a fantastic swing bowler as well up front with the new ball. He can be a significant contributor for CSK at the crunch stages of both the innings and it’s very much possible that he replaces du Plessis and makes his IPL debut tomorrow.

There are some massive chunks in RCB’s armoury and they are clearly visible. Both the victories they have achieved so far have come on the back two extraordinary batting efforts from AB de Villiers. The great man from South Africa holds the key and if CSK nullifies his effect, they are the firm favourites to win this game.

From RCB’s point of view, they will have to make sure they don’t let Shane Watson do too much damage in the power-play. His wicket early will help them a great deal and then in the middle order, Ambati Rayudu is the big fish. The right-hander has been the most consistent CSK batsman this IPL and is hitting the ball like a dream at the moment. RCB must have a solid game-plan to remove him cheaply.

Because of the grip in the wicket, the spinners will have a say, more so in the first innings and while Yuzvendra Chahal will be RCB’s trump card to break the game after the power-play, CSK will be looking for Ravindra Jadeja to do the same job as he is also a very effective bowler when the ball sticks into the surface.

The prediction is for the Chennai Super Kings to beat the Royal Challengers Bangalore in this match. 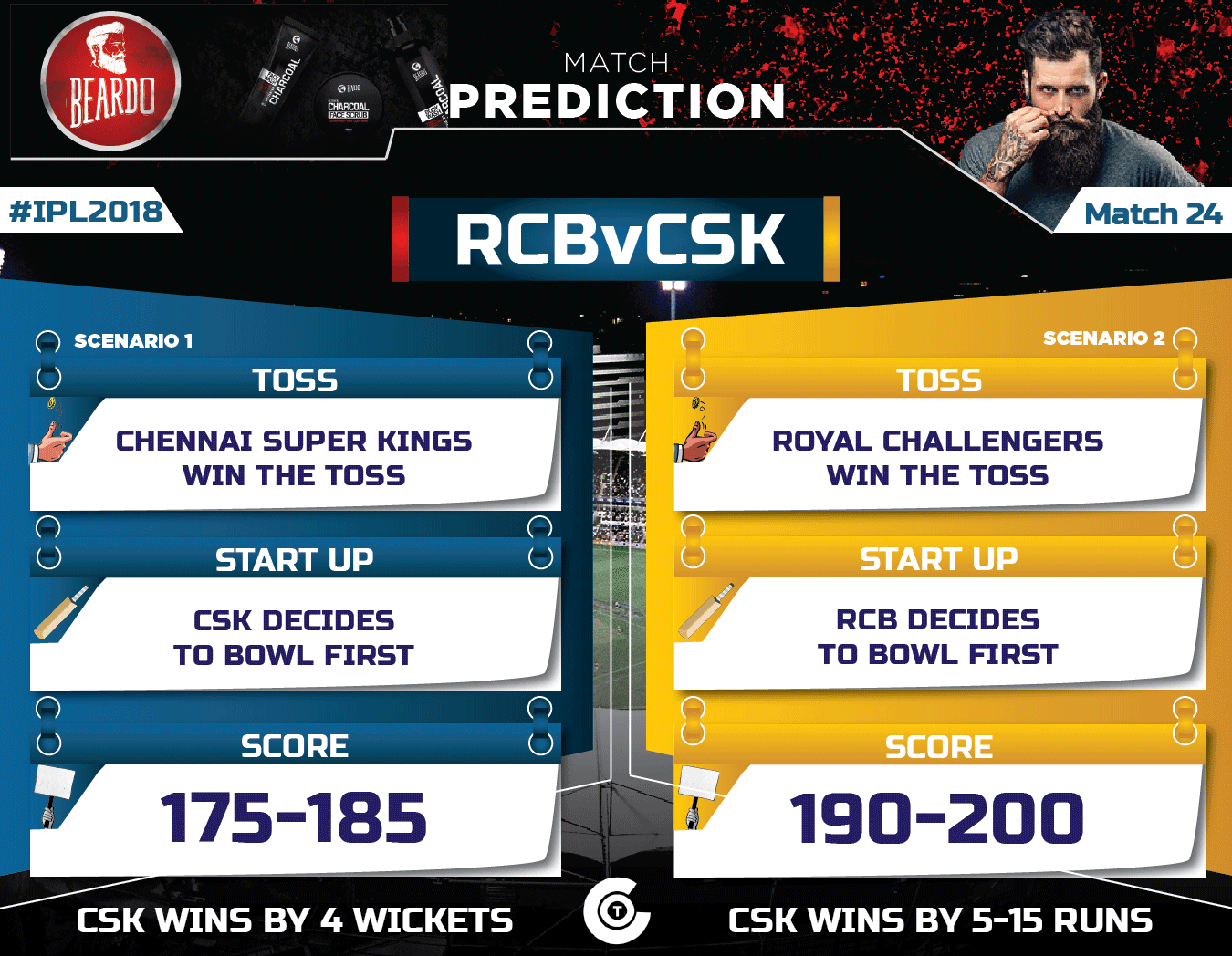