The Men in Yellow would look strengthen their position at the top of the table.

What a comeback this has been for Chennai Super Kings (CSK)! Apart from one game against Royals, all their victories have come in the last over and also the only loss off the last ball. They are sitting pretty at the top of the points table and have fought the off-field issues on their way. While they lost their key players due to injury and personal reasons, the huge blow was losing their home games which was their fortress. However, they have been magnificent so far and would love to continue in the same vein.

They will face Mumbai Indians (MI) at the MCA International Stadium in Pune on Saturday. The opponents they are going to face are struggling badly and both teams have faced each other in the tournament opener before as well. But the Men in Yellow should not be complacent as the defending champions will try to come back hard in search of an elusive victory. All the required guns have been firing for the team so far and the skipper MS Dhoni will be relieved right now.

Here we bring you the predicted XI of CSK for the game against MI:

Ambati Rayudu has hit the purple patch this season and the move to open the innings with him has proved to be a masterstroke. He has the orange cap with him currently and the sensational form suggests it will remain with him for some time now. Rayudu is a crucial member of this set-up and would be itching to continue in the same vein at the top of the order.

Shane Watson has endured a failure in the last couple of matches after hitting a brilliant century. He must take care that he doesn’t go into the shell and quickly needs a decent enough outing. There is no way that he will be dropped as he has done enough to retain his place and the champions like him always come back strongly. Expect a blazing knock from Pune at the same venue where he scored a ton.

This has been a meek season so far for Suresh Raina. He is coming back from injury and it could be seen from his foot movements while batting. He is too good to write off so early in the season and a scintillating knock is not far away from Chinna Thala of CSK. His fielding is of high-class and always makes sure that he saves around 10 runs in the field for his team.

MS Dhoni has found his mojo with the bat and is now the second highest run-getter for his team. He is batting with the strike-rate of over 165 which is the best in last few seasons as well. No wonder his fans are thrilled after watching his brilliant batting. His impeccable wicket-keeping skills are never questioned by anyone and should continue playing in the same vein for the remainder of the season.

Sam Billings hasn’t done much with the bat so far after his match-winning knock. But his place is not in jeopardy as of now. It is crucial that he stays upbeat to score runs as his heroics might be needed at any stage of the tournament.

Dwayne Bravo has become the man for the last overs for CSK this year. The six he hit in the last over against RCB was perfect as it brought them ever so closer to the victory. His death bowling also is at the peak at the moment and the team management will be hoping that he continues in a similar manner. Nevertheless, he is loving his role in the team also and is enjoying his stint under Dhoni.

Ravindra Jadeja has finally got some role to play as an all-rounder. Dhoni is using him more with the ball as well now and he was also given a promotion with the bat the other day. But the left-hander has been disappointing so far and should play few more games given the fact the skipper likes him in the team for the impact he makes in the field.

The spin bowling duo of Harbhajan Singh and Imran Tahir have so far done the bulk of bowling in the department for CSK. Karn Sharma played a couple of games but he was replaced by Bhajji again. The experience is coming to the fore for him. Tahir was brilliant to dismiss AB de Villiers a couple of days ago and he would be eyeing a few more wickets now in this game.

The season has been of completely contrasting stories for Deepak Chahar and Shardul Thakur. The former has improved significantly with every match he has played and Shardul has gone worse. Dhoni has still backed him to come good in the latter stages of the tournament but the youngster has to repay the faith soon enough. The upcoming game would be crucial for him.

Here’s CSK Predicted XI for the game against MI 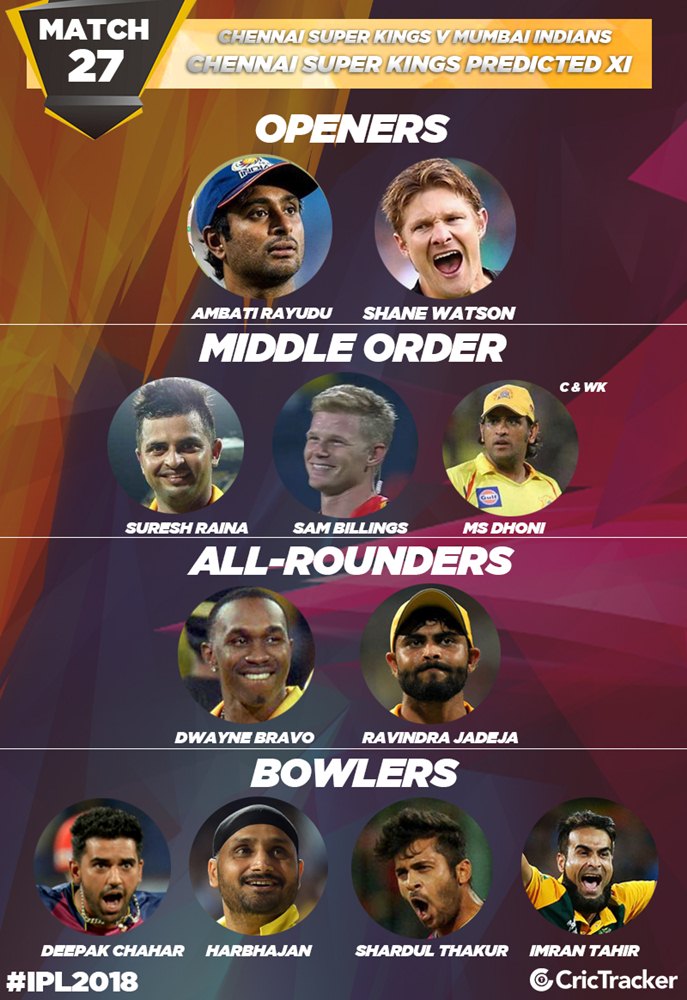