While there is not much to choose between the two teams in terms of quality, CSK starts the favourites tomorrow on the basis of recent form.

Mumbai Indians, as usual, have had a slow start to this Indian Premier League (IPL) season, but they are now running perilously close to elimination having registered 5 losses to their name already. As they bump into the table toppers the Chennai Super Kings tomorrow, they will be looking to resurrect their campaign which looks really difficult if they don’t raise the level of their performance by a couple of notches.

The Chennai Super Kings, on the contrary, have had a fabulous campaign. They have not been clinical and dominant, but have found a way to win games from really close situations, unlike Mumbai. With 5 victories in 6 games, they have a real opportunity here not only to qualify for the playoffs but to push for one of the top 2 spots in the points table at the end of the preliminary stage so that they have two opportunities in the playoffs.

The Pune pitch played really well last game as Shane Watson put an exhibition at the top of the order and smashed the Rajasthan Royals bowlers to all quarters. There was a little bit of grip for the spinners on that pitch, but the dew nullified it to a large extent and it effectively became a batting paradise as the game progressed. It shouldn’t play any differently tomorrow and should remain ideal for stroke-play. Because of the dew, the team batting second will have a slight advantage.

Sam Billings played a match winning knock for CSK at Chepauk against KKR, but he has lost his touch ever since. He is looking uncomfortable against spin which is not a great situation if you are batting in the middle order in Indian conditions as the opposition generally looks to put the squeeze on with the spinners in that phase of the innings. CSK might replace him with David Willey and put him at the top of the order with Shane Watson, demoting Ambati Rayudu down to 4 as he is a high-quality player of spin.

Another change CSK might think of is to bring in Karn Sharma for Harbhajan Singh who has failed to make any sort of impact with the ball for the Men in Yellow this season. Karn not only offers a wicket-taking option with the natural variation of leg-spin but can also contribute with some useful runs down the order at no. 8 which will further add to the batting depth of CSK.

Kieron Pollard has looked out of form right since the beginning of the tournament, but given his experience and reputation, the Mumbai Indians gave him a long run and rightfully so, as the player of his stature, once he finds form, can play extraordinary knocks and can win games on his own. However, now that Mumbai are in a desperate situation and Pollard still nowhere close to his best, the management might make a big call and slot in Ben Cutting as the like-for-like replacement for the big Caribbean right-hander.

CSK have emerged as the strongest batting side in the tournament. Unlike some of the other teams where the strike force is centralized at a couple of names, CSK has got it nicely distributed right through the order. Different players have stood up at different stages to win the games for them.

Mumbai also have a strong batting unit, but form is an issue for them at the moment as apart from Ishan Kishan and Suryakumar Yadav, almost everyone else has struggled for consistency.

As far as bowling is concerned, CSK doesn’t have any reliable bowler for the death overs. Dwayne Bravo has disguised his variations well in patches, but he has been smacked as well on quite a few occasions. Mumbai doesn’t have issues on that front as hardly any combination in the world will be able to match Bumrah-Mustafizur duo when it comes to death bowling.

CSK, however, have a couple of good options upfront and in the middle overs with Deepak Chahar getting nice shape away from the right-handers on a consistent basis and Imran Tahir also starting to regain his rhythm now. While there is not much to choose between the two teams in terms of quality, CSK starts the favourites tomorrow on the basis of recent form.

The prediction is for the Chennai Super Kings to beat the Mumbai Indians in this match. 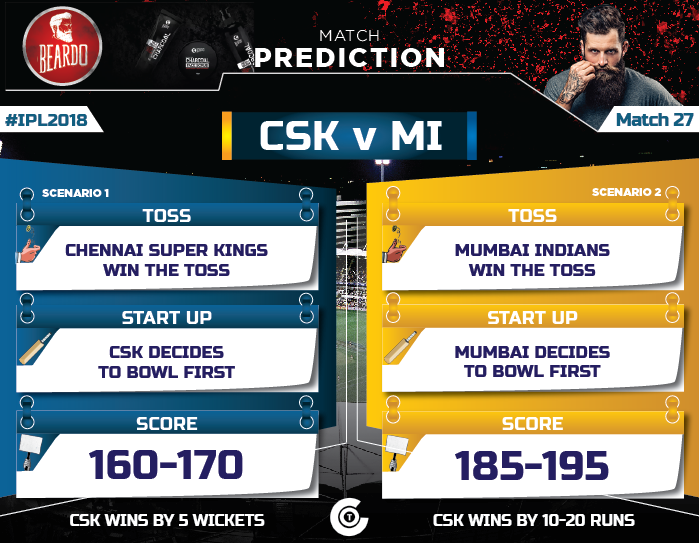