The Challengers have been out of sorts this time around.

The Royal Challengers Bangalore are struggling with familiar problems as their bowling is consistently letting them down as has been the case with them in most of the IPLs in the past. They apparently had a “balanced squad” for this year’s IPL, but as it has turned out in the first 6 games, they still seem to be a batting heavy side and are very much reliant on AB de Villiers and Virat Kohli duo to see them through.

With 2 victories in 6 games, RCB’s campaign seems to be going nowhere at the moment and while by no means they are out of the tournament just yet, they quickly need to find the right balance in the XI and mark the right personnel to perform the right roles in the team.

The Kolkata Knight Riders have misfired in the tournament. While they have been clinical in some of their matches, they have suffered back-to-back losses recently. Balance is not much of a problem for them unlike RCB, but the fact that some of their key players are out of form is what’s hurting them.

The last game played at Chinnaswamy stadium saw more than 400 runs being scored with both teams getting past the 200-run mark, but that was not a true reflection of how the pitch actually behaved. It was not a flat pitch at all and had a fair bit of turn available for the spinners.

However not all the spinners on show bowled the right lengths and as a result, ended up getting smashed over the small boundaries. It should be a turning deck at Chinnaswamy again tomorrow and if the spinners from both sides are at the top of their game, this might not be a very high scoring fixture.

Corey Anderson has been given more no. of opportunities than he should have been and it will be a huge surprise if Virat Kohli doesn’t drop him tomorrow. He hasn’t been able to justify his selection in any of the games he has played and should be replaced by Tim Southee who is probably the only bowler in the RCB squad capable of bowling good Yorkers.

Pawan Negi has played a couple of games and has failed with both bat and ball. While he can’t be blamed much for his batting failures as he has walked out to bat at the latter stages of the innings and hasn’t really had much time in the middle, his performance with the ball the other evening against CSK was extremely ordinary as he bowled too full and too flat. The southpaw will have to make way for Manan Vohra who will open the batting with Quinton de Kock.

Shivam Mavi and Mitchell Johnson were taken apart by the Delhi batters the previous game, but KKR doesn’t really have ideal options to replace them. They have tried Vinay Kumar and Tom Curran earlier in the tournament and those two haven’t provided great returns either. So they are more likely to persist with Mavi and Johnson for this game and back them to get the job done.

Mavi just has to be a bit tight with his line, especially when bowling towards the latter stages of the innings where the margin of error is very small. He erred quite a bit bowling the 20th over to Shreyas Iyer at Kotla last night.

While there has been a lot of focus on RCB’s bowling, there are loopholes in their batting as well. There is not enough strike-force in their lower middle order and if AB de Villiers is removed cheaply, they might find themselves in a spot of bother. KKR, on the other hand, will be worried about the form of Robin Uthappa. He has been one of their consistent players in the top order over the years but has been out of touch this IPL. He holds a key position at no. 3 and if he finds his touch, it will benefit the visitors big time.

Talking about the bowling, the pace is not the stronger forte of either KKR or RCB. They have got a couple of quality spinners each and that’s where the game lies keeping the Chinnaswamy surface in mind. Whichever team does better with their spinners should be in the driver’s seat.

The prediction is for the Kolkata Knight Riders to beat the Royal Challengers Bangalore in this match. 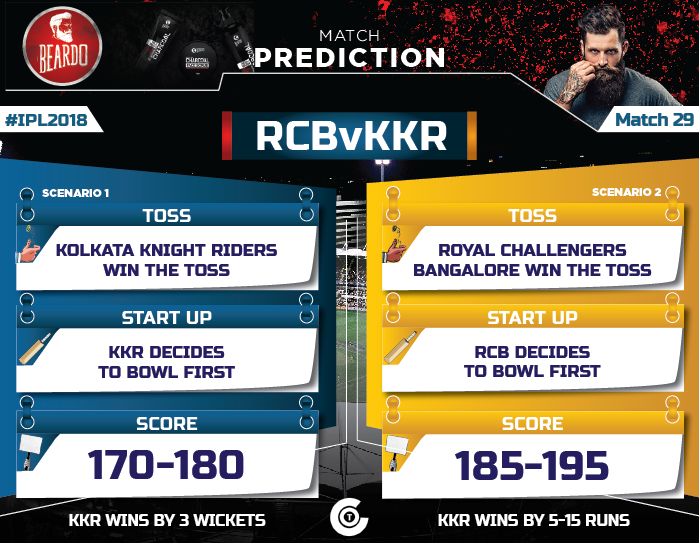