Kolkata Knight Riders opened the tournament in grand style with a thumping victory.

Virat Kohli and AB de Villiers have been tormenting prospects for a number of teams in the Indian Premier League (IPL). The duo has wielded their magic together for the Royal Challengers Bangalore and has tormented opponents. It wasn’t any different today and they carried on their own merry way which threatened to post a target which could have ended up way beyond Kolkata Knight Rider’s radar.

The stand piled on the agony for the Knights, until a certain ‘bowler’ by name of Nitish Rana inflicted mayhem in a space of two deliveries. ‘Part-timers are men with golden arms’ is an old adage coughed up by experts and Rana turned out to be exactly the same. The ‘luring’ prospect of undermining Rana proved fatal for the stalwarts, which eventually panned out to be a decisive factor in the game.

The third game of the tournament wasn’t short of excitement. Quinton de Kock became the second left-hander today after Colin Munro who perished in a reverse sweep. It also manifests the fact that being ‘over-innovative’ in the start can land one in an unwanted loop. However, RCB recovered through AB and Virat’s brilliance and while they were batting, Dinesh Karthik’s captaincy went through a stern test.

With Kohli and de Villiers at the crease, Rana’s introduction into the attack seemed like a ‘brain-fade’ more so when he was muscled over mid-wicket by the South African batsman. Two balls later, the move turned into a ‘masterstroke’. The pitch was a belter and Bangalore were definitely in danger of getting out for an under-par score.

Without Mandeep Singh’s lusty blows, RCB would have already played catch-up on what seemed like a batsman’s paradise. Chris Lynn flayed his bat around and when he eventually made a proper connection, AB de Villers’ catch in the covers sent him packing. Sunil Narine displayed his ‘affinity’ with the RCB bowlers by spanking them from ball one itself.

Though he went hammer and tongs, on no occasion did the shots looked like agricultural whacks. The range of strokes on display can’t be categorized as the ones of an ‘established tail-ender’. The sweep and the drive over Yuzvendra Chahal’s head in the opening over were proper cricketing strokes. The half-century by the Trinidadian was indeed entertaining, but it wasn’t ‘game-changing by any means.

Amidst some lackluster bowling, AB de Villiers threw himself on the outfield and the spring in his step was visible from the outset. RCB needed some inspiration following Narine’s blitzkrieg and de Villiers’ display of fielding inspired the Challengers to make a comeback. They weren’t able to churn out a whole lot wickets, but kept the KKR batsmen in check, enough to take the game deep.

The RCB spinners in Chahal and Washington Sundar, who were expected to turn the screws on the Knight Riders, faltered frantically. The complexion of the game could have been much different had they not leaked runs at the haemorrhaging rate they did. Meanwhile, RCBs horrendous run of form from the previous season gets carried forward to the current season as well. 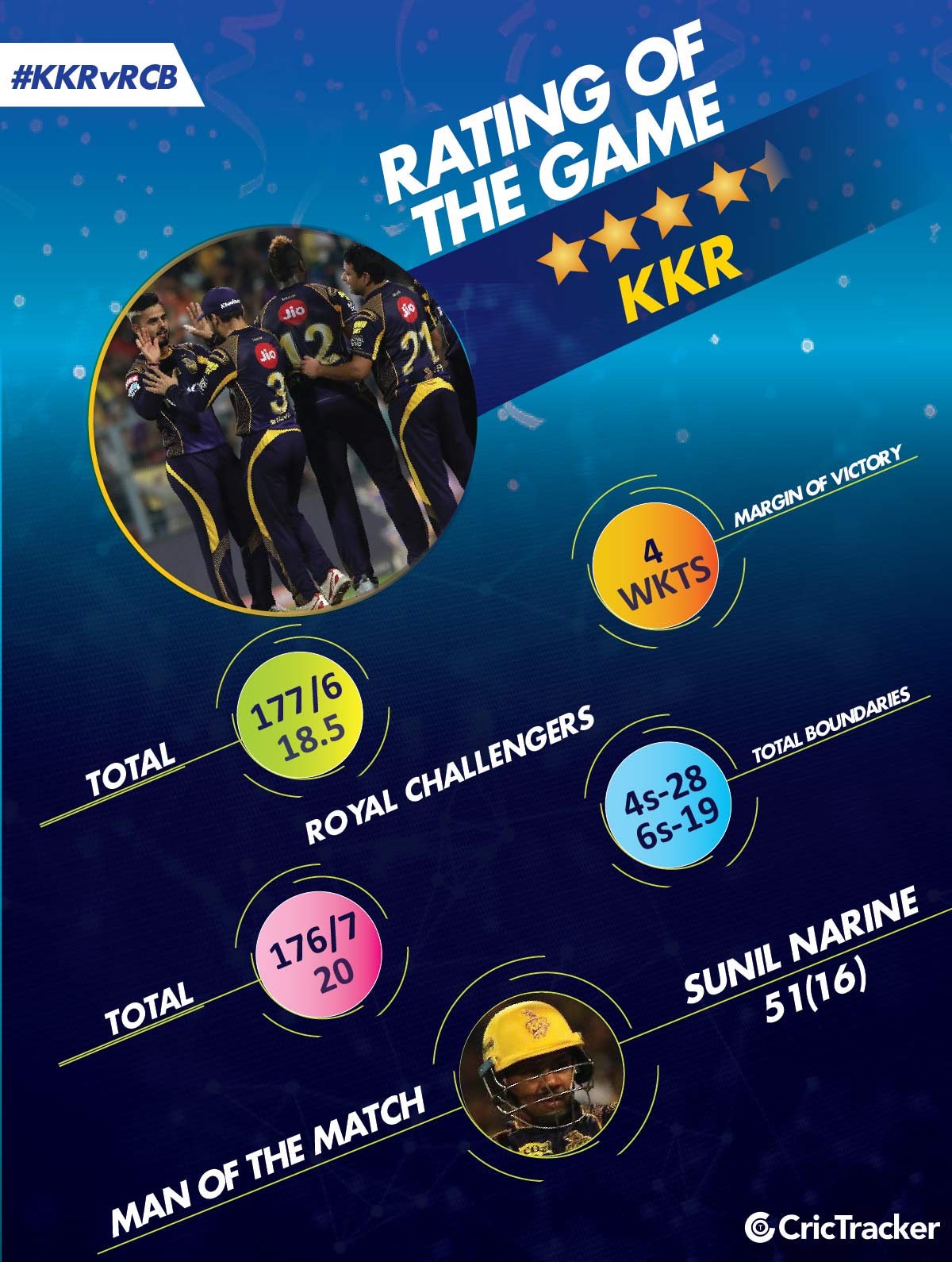