While it was Shane Watson who started the onslaught, MS Dhoni finished it with his blitzkrieg.

Chennai Super Kings (CSK) proved too hot to handle for the Delhi Daredevils (DD) at it was raining fours and sixes in Pune on Monday. While it was Shane Watson and MS Dhoni in the first innings who tore apart the bowlers, Rishabh Pant alone was enough to keep the CSK fans tensed in the chase. The bowlers were at the receiving end big time and they failed to nail in their yorkers properly. However, it could be safely said that CSK had their big guns firing which trumped DD as they succumbed to their sixth loss of the season.

It was Shane Watson’s day and it was clear after he was reprieved off the first ball of the match by the third umpire as well. The close leg before went in his favour even after DD reviewed the decision of the umpire. The onfield decision stayed as the TV umpire failed to conclude if the ball had hit bat or pad first. The next ball went for four and Watto announced himself in style.

Though he took some time then to get his eye in and targetted Liam Plunkett to start plundering the runs. His first six was hit disdainfully with the batsman pulling the short ball off the front foot as the deep square leg region was peppered. The next delivery was on to his hips and he nonchalantly clipped the ball this time over the deep backward square. The shots got him going as Watson again smashed the same bowler for a couple more sixes in his next over as we

The fun continued for the Australian as Rahul Tewatia was in the firing line next. Anything short was going into the stands as Watto was dealing in sixes today. But just when it seemed when he will go on to hit his second ton of the season, Amit Mishra got better of him but not before he scored 78. It was an innings of ruthlessness and pure carnage with Watson at his vintage best. He smashed 4 fours and 7 gigantic maximums during his stay in the middle and had set CSK towards a monumental total.

MS Dhoni came out to bat with his team stuttering a bit at 130/3 in the 14th over. He is having one of his best IPL seasons in recent years and Mahi doesn’t want to miss out on anything this time around. After having a sighter he launched Amit Mishra into the stands who was bowling extremely well and then what followed was an absolute carnage. He pulled the trigger in the 17th over by smacking the short ball flat into the stands. It was just a swivel from him as the pull looked ominous.

The best shot of the innings and probably the tournament came off the last ball off the 19th over as the impressive Avesh Khan missed his mark ever so slightly. Dhoni pounced on it and clubbed it over the deep square leg with all the might which ended up being the second longest six of the tournament so far. It went a massive 108 metres and summed up the bowling effort from DD on the day. Eventually, he finished on 51 off just 22 balls which was his second fastest half-century in the IPL. His knock also propelled CSK to 211 runs which were enough for them.

Rishabh Pant showed his class once again and played a valiant knock for his side in the losing cause. While others kept falling around him, he kept going patiently and unfurled his big hits when it required the most. He began his innings with a six over the cow corner indicating that he was in the middle to gun down the target. His powerful shots kept CSK on their toes until the end as even the best in the business Dwayne Bravo was also not spared.

He is always criticised for trying to hit the ball hard but he showed finesse also today and took his team close to the target. Sadly, the heroic stuff ended up on the wrong side but it will keep him in good stead going forward this season. 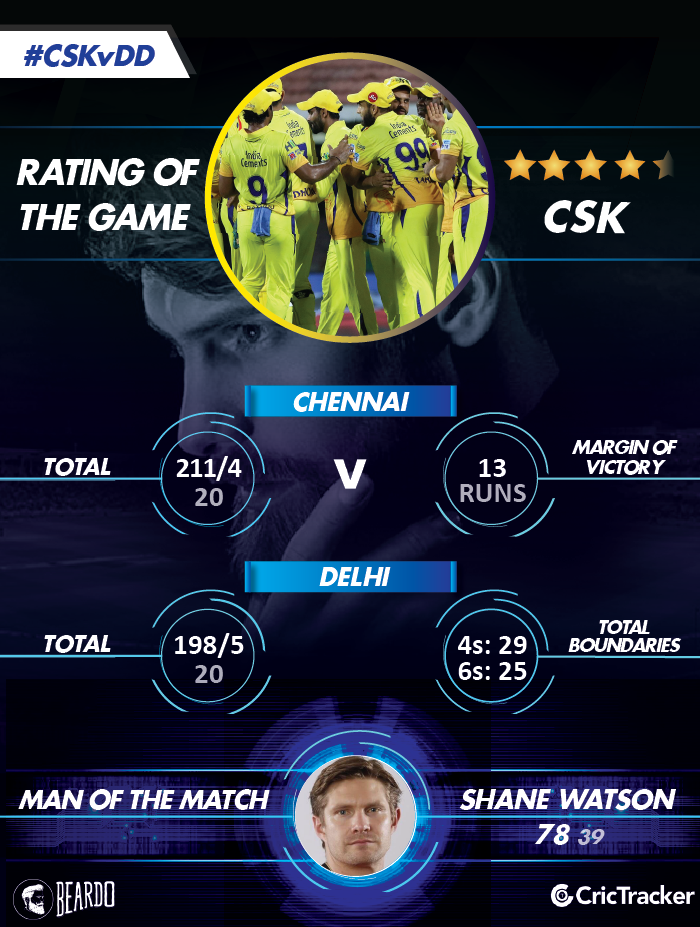