Rohit vs Umesh at the top of the order promises to be a mouth-watering clash.

Mumbai Indians and Royal Challengers Bangalore have underperformed in the IPL 2018 managing only two wins in the first half of the tournament. The struggling teams will now face off in the reverse fixture of the rivalry in Bangalore as they teams aim to overcome their previous mistakes. Mumbai have failed to grab their chances and finish the games while Bangalore’s death overs bowling has turned out to be a big drawback. Both the sides are filled with big batting stars who would love to make good use of the short boundaries at the Chinnaswamy.

The teams led by Virat Kohli and Rohit Sharma have had anti-climatic results given how their captains have performed. While three of Kohli’s fifties were in a losing cause, Rohit got two in the two wins his team has secured this season and was also the Man of the Match on both occasions. The MI skipper will once again be a crucial cog in his team’s success despite giving upon his regular opening role. Rohit started the season as an opener before pushing himself down the order depending on the match situation.

In the game against RCB, he arrived at the crease on the 3rd ball of their innings after Umesh Yadav sent back Suryakumar Yadav and Ishan Kishan for golden ducks. Umesh is currently bowling at his best and has been rewarded with nine wickets in seven matches going wicket-less only twice. The speedster could once again be a threat to the Mumbai Indians’ top order that has been vulnerable in conditions that seam. It will be interestingly to see where Rohit will bat in this match. 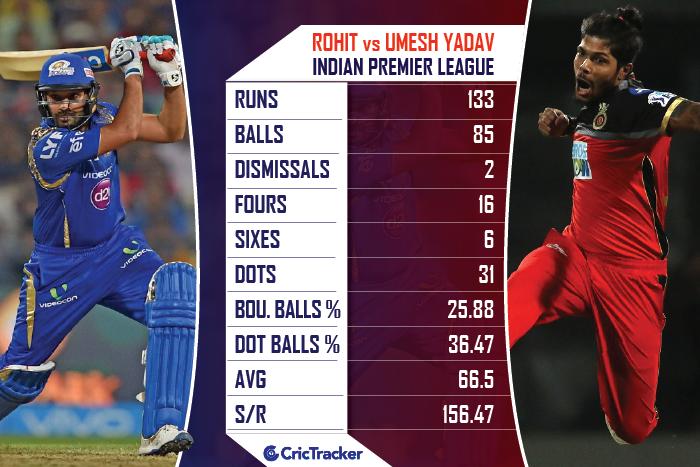 With RCB trying to bowl 2-3 overs of Umesh’s spell in the powerplay, it will be ideal for Rohit to bat in the top three. The 30-year-old possess a great record against the pacer in the IPL. Rohit Sharma has scored 133 runs with a strike-rate of 156.47 against Yadav having faced 85 balls and has got out twice. These are the 2nd most runs he has scored against any bowler in the IPL second to Piyush Chawla (136).