Rohit and his men would like to continue their winning momentum against RCB as well.

The defending champions Mumbai Indians (MI) finally got their season back on track with a win over their arch-rivals Chennai Super Kings (CSK) in Pune. Now they head to South where they will face Royal Challengers Bangalore (RCB) who are in a similar situation like them and need to win almost all their remaining matches. The prospect of the must-win game is in itself is exciting as it brings the best out of the teams like these and the Chinnaswamy Stadium might witness the plethora of fours of sixes on Tuesday.

Mumbai took some harsh decisions to drop the likes of Kieron Pollard and Mustafizur Rahman in the last game and they reaped rewards right away. They would like to continue with the same momentum in this game as well. But even RCB is wounded after suffering a defeat at the hands of KKR on Sunday and they would be itching to get their combinations right for this must-win game for them.

Suryakumar Yadav and Evin Lewis have done so well this season while opening the innings for Mumbai. Both will continue to bat at the top of the order in this game as well. The team will hope that they provide them with yet another blistering start. Surya has been excellent and has raised his game a notch higher after being promoted in the batting line-up.

Evin Lewis, on the other hand, has struggled in last few matches. His last outing with the bat was painstaking as he played a lot of dot balls which increased pressure on his partner. The Caribbean cricketer has not been able to rotate the strike against the off-spinners and needs to work on his aspect of the game. If Lewis gets going, no one can stop as he has proved it in the tournament before.

Rohit Sharma cleared that his promotion in the batting order was only due to the match situation which means Ishan Kishan will continue batting at number 3. The youngster has proved his worth so far with the way he has been smacking the ball and the team would want him to continue in the same vein. With the backing of his skipper, he will only grow in confidence with his wicketkeeping also flourishing at the right time.

Rohit Sharma found his form in the last match again and needs to be consistent now if his team needs to win the next few games. It is important for Mumbai that their skipper remains in the thick of the things which make him a  dangerous player. As a skipper, he has seen it all and the batting maestro in him has to come to the fore if the Men in Blue aim to defend the title. JP couldn’t do much in the last game and would be eyeing to make a difference this time around.

Kruna Pandya has been brave to bowl in the powerplay. He scalped the wickets of Shane Watson and Ambati Rayudu in the previous encounter which pulled back the hosts who were set to score big while batting first. He needs to bat well though and his acrobatics in the middle order could be required at any point in time. His brother Hardik Pandya batted decently in the last match when things became tricky in the end. He also contributed while bowling and should find his groove soon.

Ben Cutting bowled only a solitary over and went for 14 runs against CSK. The Australian is mostly picked to strengthen their batting and he could be used as a floater in the line-up as well. But he should be good enough always to give a couple of overs to his captain as well. He might be needed to bowl again at the Chinnaswamy Stadium and should be looking forward to the challenge.

Many are feeling bad for this youngster. He has done everything he could’ve with his mystery bowling but his team has failed to win matches. Mayank Markande continues his impress everyone in his debut IPL season and has 10 wickets to his name. The teams are concentrating on playing out his four overs which in itself is an achievement for him.

Mitchell McClenaghan has found his mojo finally as he has started picking wickets upfront. He is also proving to be effective at the backend of the innings. His ‘hit the deck’ kind of bowling has been working so far and it will be interesting to see if he sticks to the same on the small ground. Jasprit Bumrah bowled well against CSK and conceded only 25 runs in his four-over spell. His captain would want a couple of wickets to add to that and suddenly he will become the match-winner.

Here Mumbai Indians predicted XI for the game against RCB 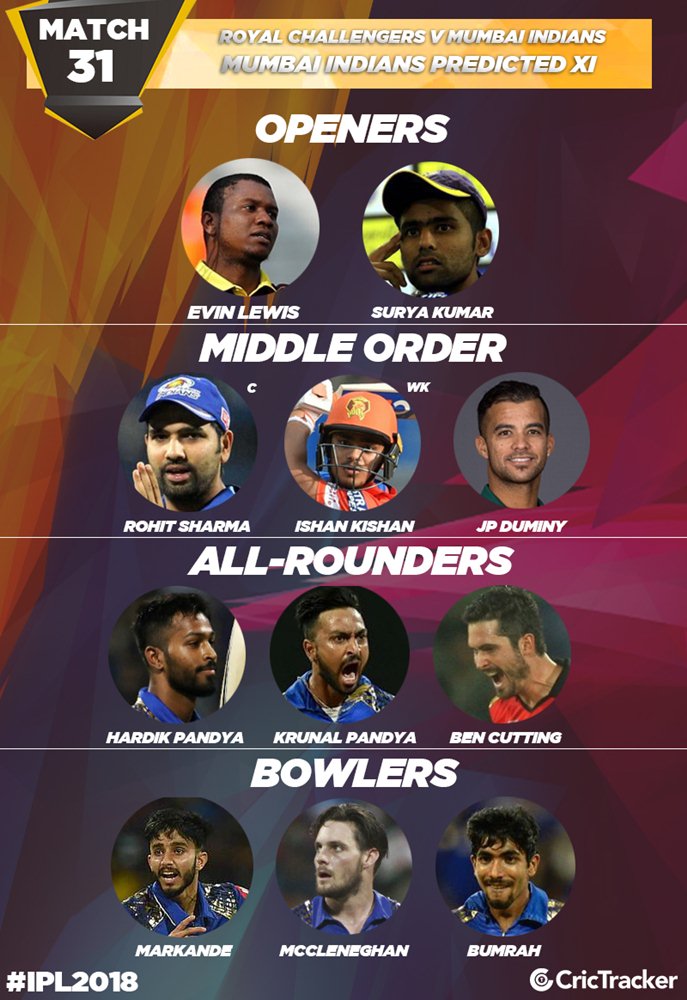