This season, MS Dhoni has ensured that the opposition now comes out with specific plans only to survive his assault.

MS Dhoni’s batting form is one of the key talking points of the ongoing edition of the Indian Premier League (IPL) as the Chennai Super Kings captain produced some blistering innings to help his team win some close encounters. The 36-year-old turned back the clock with some mighty hits and finishing off the matches in style. Dhoni thus far scored 286 runs in the IPL 2018 in just eight innings at an average 71.50. This season is only the second time when he has scored as many as three fifties and his strike rate of 169.23 is the best ever in the IPL.

This season, MS Dhoni has ensured that the opposition now comes out with specific plans only to survive his assault. The tournament began with a 5-ball 5 against MI and a 28-ball 25 against KKR during their 200-run chase. The 36-year-old’s struggles against spinners were evident in the first two matches before he turned it around. He later demolished the likes of Amit Mishra, Rashid Khan, Mayank Markande and Pawan Negi ending the saga of his struggle against left-arm and leg-spin.

His biggest challenge will be against Kolkata Knight Riders at the Eden Gardens where he will be taking on an attack that boasts of three spinners. Dhoni often had troubles facing the mystery off-spinner Sunil Narine though he has never got out to him in the IPL. The wicketkeeper-batsman has faced 52 balls from Narine and scored just 25 runs without hitting even a single boundary. Dhoni had looked uncomfortable even during the home fixture against KKR at the start of the season. 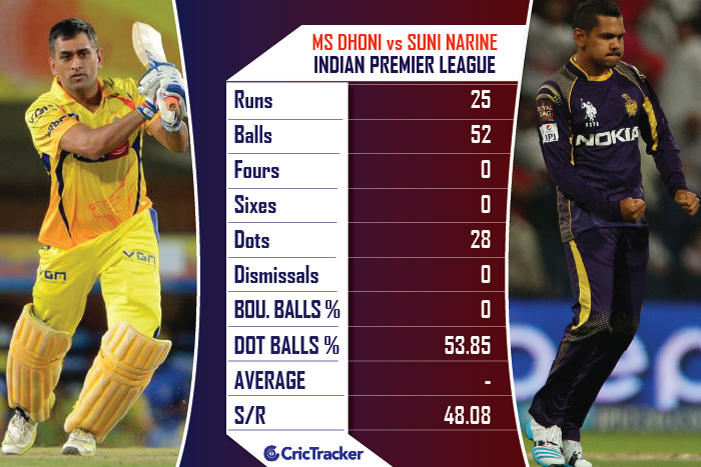 While the Narine threat persists, Dhoni will have to deal with the pair of wrist spinners Piyush Chawla and Kuldeep Yadav. Chawla has faced the wrath of the former Indian skipper in the past having conceded 75 runs in 51 balls but had also dismissed him during their previous meeting. Kuldeep was on the receiving end in Chennai where the CSK captain hit him for a six and four on consecutive deliveries. However, the chinaman had dismissed Dhoni twice in two matches in the 2017 edition via stumping and caught behind. 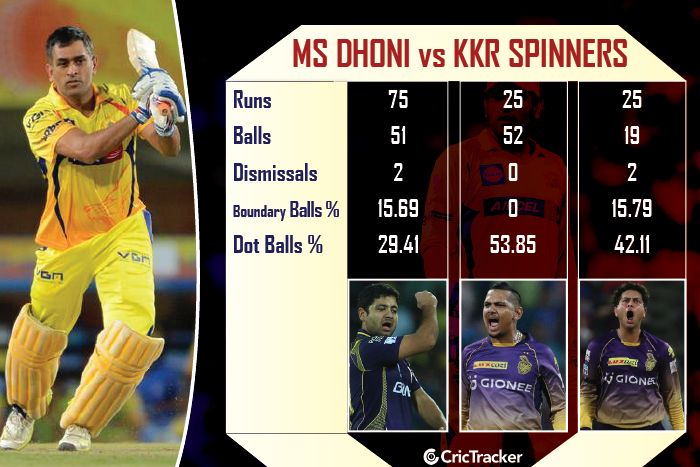