Chennai got themselves out of the slump and brushed Kohli's boys aside.

The Chennai Super Kings (CSK) had strained in their last their games, especially in the bowling department. Quite expectantly, the likes of Karn Sharma and KM Asif were dropped. Dhruv Shorey’s inclusion also meant that their batting wasn’t strengthened. Meanwhile, David Willey, who was roped in for Kedar Jadhav earlier in the tournament, eventually got his opportunity.

On the other hand, the Royals Challengers Bangalore (RCB) who thumped the Mumbai Indians (MI), also made three changes. However, a couple of them were induced by Quinton de Kock’s absence from the game. AB de Villiers is an indispensable member and had to come back. Murugan Ashwin’s second game in the series also meant RCB had a couple of quality wrist-spinners in their ranks.

Jadeja guile too vicious for RCB

MS Dhoni’s decision to field first didn’t spring a surprise, which somewhat made them favourites to win their sixth game on the trot against Virat Kohli’s men. Ravindra Jadeja, who was bashed both by Dhoni and the public for his lacklustre fielding the other night, went through Kohli’s defence. The surprising element of the dismissal was that the bowler didn’t celebrate it.

He didn’t need to as he already answered the questions surrounding his position in the team. He backed it up with two other scalps of Mandeep Singh and Parthiv Patel. The latter’s dismissal also meant that RCB lost someone who had scored 53 runs out of the 84 the team had managed. From the very beginning, the Challengers lost wickets in clumps.

AB de Villiers, who made a comeback following the viral fever, couldn’t make an impact either. Most importantly, he perished in the over following Kohli’s dismissal. In the middle-overs, RCB lost four wickets for five runs in a space of 14 balls after which they were in danger of getting bowled out below 100 runs until a certain Tim Southee came out and guided his team to a modest, yet respectable score.

RCB showed a spirited performance on the field, unlike their approach while batting. Umesh Yadav’s spell yet again caught the batsmen napping with his raw pace, the yorker and also his variations. In the last 46 balls, CSK needed 48 runs, which was tricky in the context of the game and considering the slowness of the pitch. Moreover, Kohli’s boys created chances, which made the game even more enthralling.

However, the next few balls decided the fate of the game. One can’t afford to grass Dwayne Bravo a couple of times and RCB did exactly the same. Colin Grandhomme has been outstanding with the leather and he created a chance. He dished out a short and wide delivery and Bravo flung his willow at it, but he got a thick outside edge.

To the Challengers’ dismay, Parthiv Patel couldn’t hold on to the catch. In the next over, Murugan Ashwin induced him into playing a false stroke. The Trinidadian tried to play inside out and find the extra-cover boundary. However, he mistimed it and the ball hung in the air forever.

Yuzvendra Chahal got around it but got himself tangled into a position and never got his hands behind the ball. His confidence was severely dented as he came back and conceded 21 runs in the 18th over as MS Dhoni hit him for three sixes one of which was a free-hit and it brought the curtains down on the match. 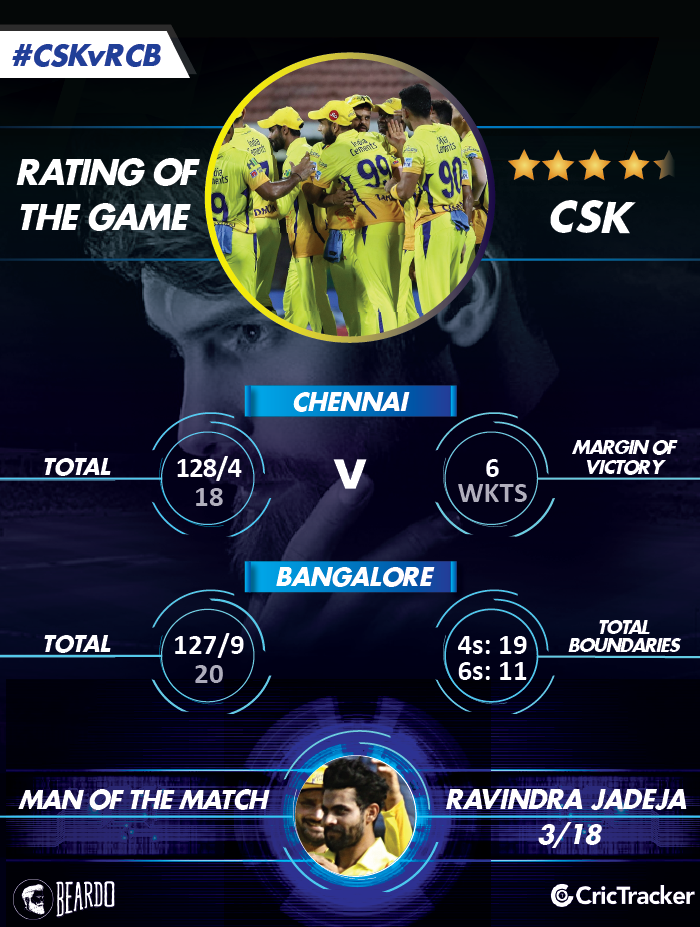