RCB have almost been eliminated from the tournament.

The mental state of the Royal Challengers Bangalore (RCB) wasn’t the greatest prior to the game. However, during the toss, Virat Kohli backed his team’s strength-batting- if even it meant playing into the strong point of the opposition. Sunrisers Hyderabad (SRH), the team that is deemed to possess the deadliest bowling attacks were given the privilege of defending a target.

The pitch, quite expectantly, was slow in nature and the batsmen were in for another tough day. It was evident right from the start as Tim Southee went through the defence of Alex Hales. The ball took forever to reach the batsman and foxed him. Moeen Ali was given the new ball and Kohli should be lauded for giving the IPL debutant the first over and he responded with eight runs off two overs.

The pitch didn’t spew venom but had enough to keep the batsmen on the toes. Kane Williamson is among the rare breed of batsmen from outside the sub-continent who thrives on such wickets. The Kiwi manoeuvred the field and deciphered every tactic Kohli implemented to outclass him.

The 56 runs off 39 balls might have been scored at a strike-rate of 143.58, but at no point in time did he seem like taking unwanted risks. Meanwhile, he cleared the fairly boundaries a couple of times and surprisingly, none of them was whacks and was exhibition and exemplification of timings. The pitch turned into a batsman’s paradise, maybe Williamson’s batting made it seem like one.

Following his dismissal, Sunrisers lost seven wickets in 25 balls and could only score 34 runs. The last four wickets fell for three runs and the home team folded for 146 runs. Needless to say that, that SRH could have added 20 more runs, if not more, had Williamson played out the entire 20 overs. However, the target was never going to be a stroll in the park for Kohli’s boys.

Virat Kohli, during the run-chase, was in a league of his own. He used his feet to the bowlers and helped RCB garner 55 runs inside the powerplay. A required rate of 6.57 from there onwards with nine wickets in hand, statistically, wasn’t a daunting task by any stretch of the imagination. Nevertheless, there was a certain bowler by the name of Rashid Khan whose spell of three overs and 17 runs, changed the complexion of the game.

The first over fetched five runs, but it was a start to the carnage which was about to unfold. He produced chances in his first two overs, but Siddharth Kaul and Williamson grassed the catches of Manan Vohra and Kohli. The cat amongst pigeons had already been set in RCB’s dugout as the Afghan tweaker had three overs remaining up his sleeve.

Unlike Vohra and Kohli, AB de Villiers wasn’t so lucky as a ripper of a wrong’un shattered his woodwork. The wicket was a body blow for them as in the last over, Yusuf Pathan grasped the catch of his life to dismiss Virat, which halted the momentum garnered by the visiting team. A couple of lusty blows by Colin de Grandhomme off Rashid reignited the hopes of RCB.

The last couple of overs defined the reasons why Williamson’s men are rated highly as a bowling unit. With 19 runs left Kaul and Bhuvneshwar Kumar conceded 14 runs. The Yorkers couldn’t have been nailed with any more perfection. Most vitally, their nerves didn’t jangle. In the end, the brave decision of Kohli to chase against the Sunrisers backfired. 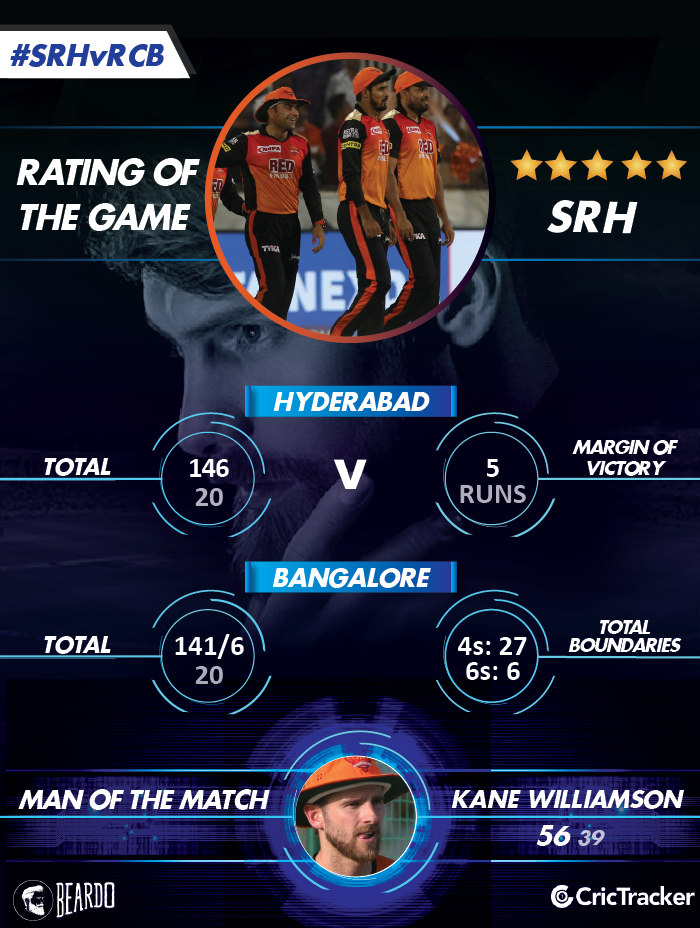