Delhi Daredevils have no chance of finishing in top 4 now and they can spoil the party for the other teams which can start from tomorrow itself against RCB.

The Delhi Daredevils have no chance of finishing among the top 4 now and all they can do from here on is to spoil the party for the other teams which can start from tomorrow itself against the Royal Challengers Bangalore. RCB although have lost 7 games and have almost been eliminated already, but still hold a slight mathematical chance if a whole lot of other results go their way. However, if they lose tomorrow, it will be curtains.

It will be homecoming for the RCB skipper Virat Kohli who is the local boy of Delhi and represents the state in the Indian domestic circuit. The loyalties of city fans will surely be divided tomorrow and there should be ample support for the visitors as well apart from the home team.

The Kotla pitch for last night’s game between Delhi and Hyderabad was slow and sticky to start with, but as the game progressed, it got better and better for batting because of the dew. The ball skidded on nice and easy in the second innings and the batsmen made merry. Both captains would have taken note of that and wouldn’t have any doubts in their minds about bowling first if they win the toss.

As Delhi are out of the tournament, they won’t mind making a few changes and giving the players on the bench an opportunity. One of the players who deserve a go is Sandeep Lamichhane, the only player from Nepal on show in the IPL. The young leg-spinner has been talked about as an impressive talent and given the nature of Kotla pitch, it won’t be a bad option. Delhi can get him as a replacement for Liam Plunkett who is horribly out of form.

If Plunkett is out, another change that might be on the cards is Daniel Christian for Glenn Maxwell. Christian will be the batting all-rounder who will not only do Maxwell’s job of finishing the innings down at no. 6, he will be the third seamer as well in Plunkett’s absence.

Jason Roy is a fantastic white-ball player, but he generally struggles in slow conditions purely because of the fact that he likes to play on the rise a lot rather than going close to the ball. Colin Munro is a better bet if the ball grips and hence should get the nod tomorrow.

RCB might have lost the last game, but the XI they picked was the right one. Parthiv Patel is doing the job they asked of Quinton de Kock up the order which is to bash the fast bowlers and it’s highly unlikely that they will contemplate dropping him.

Manan Vohra is going well too and so is the pace trio of Southee, Siraj and Umesh. The only player whose spot is up for a little bit of discussion is Moeen Ali as he didn’t have a great debut against Hyderabad, but Virat will certainly give him another go as he is a utility player and can make an impact with both bat and ball.

Delhi have their youngsters firing on all cylinders this season. The likes of Rishabh Pant, Prithvi Shaw and Shreyas Iyer have set the tournament ablaze and if the overseas stars join the party, it’s a really formidable batting unit. The same can’t be said about RCB. They look like a million bucks when Virat Kohli and AB de Villiers come good, but there is not enough potential in there if the two of them have an off day which is a real concern.

RCB, however, have an edge over the hosts with their bowling which has been brilliant the past few games. They have found their death bowlers in Siraj and Southee, while Umesh is bowling some absolute rippers upfront. Delhi don’t have a single in-form bowler in their ranks at the moment. While Trent Boult is struggling big time, Amit Mishra has erred with his speeds and lengths way too often. They are both experienced campaigners and the Delhi management will hope they bring their A game to the fore tomorrow.

The prediction is for the Delhi Daredevils to beat the Royal Challengers Bangalore in this match. 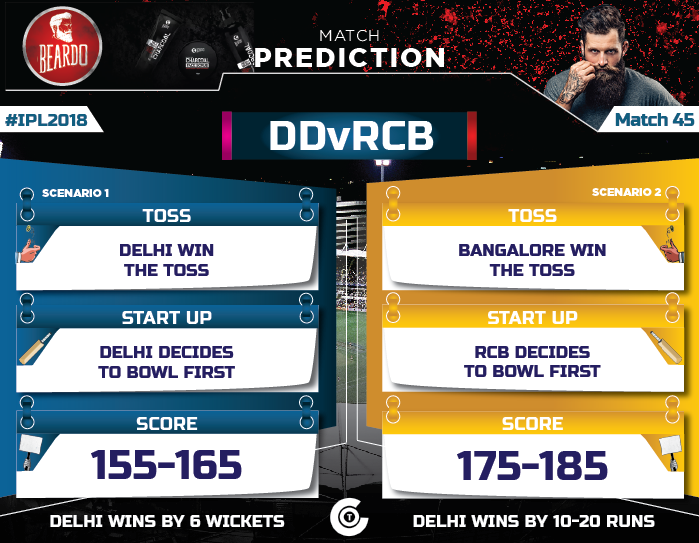