The Knights were greeted with 'agony' while Chennai gifted the audience with an authoritative victory.

Statistics are a crucial element of a game and quite expectantly, they were being churned ahead of today’s game between Chennai Super Kings and Kolkata Knight Riders. CSK had won 11 of their last 12 games at the Chepauk, which tilted the encounter in favour of the hosts. Following the toss, the odds were severely stacked against the Knights as no team has won a game this season defending a target.

As far as excitement is concerned, there wasn’t a dearth of it as the crowd was kept at the edge of their seats throughout. The Knights found themselves in grave danger at the half-way mark having lost a flurry of wickets. Suresh Raina might be in his thirties, but the reflexes haven’t died down by any means considering his direct it to dismiss Robin Uthappa. Now, let’s talk about a certain- Andre Russell.

Windies cricketers are criticized for only possessing power-hitting abilities. However, the same attribute brought ‘delight’ for the Knights and ‘agony’ for the Yellow Army today at the MA Chidambaram Stadium. Smashing sixes was equivalent to ‘bread and butter’ for the hulk-like Russell and on this day he didn’t even spare his Windies teammate in Dwayne Bravo as six sixes were plundered off his bowling.

The most shocking aspect was that he wasn’t even middling every ball, yet the brute force was enough to destroy the Super Kings. Strategically, Chennai were horrendous as they dished out deliveries in the Jamaican’s ‘hitting arc’. The pacers served full-pitched deliveries on a platter to Russell, which are exactly the kind of deliveries he breeds on.

They could easily have taken a leaf out of RCBs tactic of hurling short deliveries. However, that wasn’t the case as he inflicted utter mayhem with his ‘merciless slaps’. On the other hand, Dinesh Karthik’s role can’t be undermined as he played the sheet anchor’s role in the partnership with Russell, which dragged the Knights from a precarious position.

The Knights, during their innings break, would have been brimming with ‘optimism’, which steadfastly threatened to turn into ‘pessimism’ courtesy some risk-free and most importantly, calculative hitting by Ambati Rayudu and Shane Watson. A plethora of hits into the stands followed as the Knights bowlers brought forth every variation and length as the pitch map would suggest.

After the powerplay, CSK seemed poised to win the game in a canter. However, their strategy was hard to decipher and they slowed down to a significant extent. Sunil Narine was surprisingly treated with respect, because of the game situation. The Knights pulled back their trump card- Narine- till the end of the six overs, which paid dividends to a large extent as the required rate escalated alarmingly.

A six followed by a boundary brought the game ‘psychologically’ in favour of the Super Kings. Most importantly, Sam Billings didn’t play like a CSK debutant as his array of strokes kept the Knights at bay for a significant time. The shots weren’t ‘at par’ with the ones of Russell but they were effective enough to send chills of horror down the spine of the Knights supporters.

The knock eventually turned out to be a bit too vicious for KKR to evade ‘defeat’, ‘agony’, ‘despair’ and ‘pandemonium’. Vinay Kumar was awful (an understatement) and dished out probably the worst delivery of the ‘season’ in the form of a waist-height full toss, which sealed the deal in the game. Meanwhile, Russell’s master-class suddenly turned from ‘heroic’ to ‘tragic’. 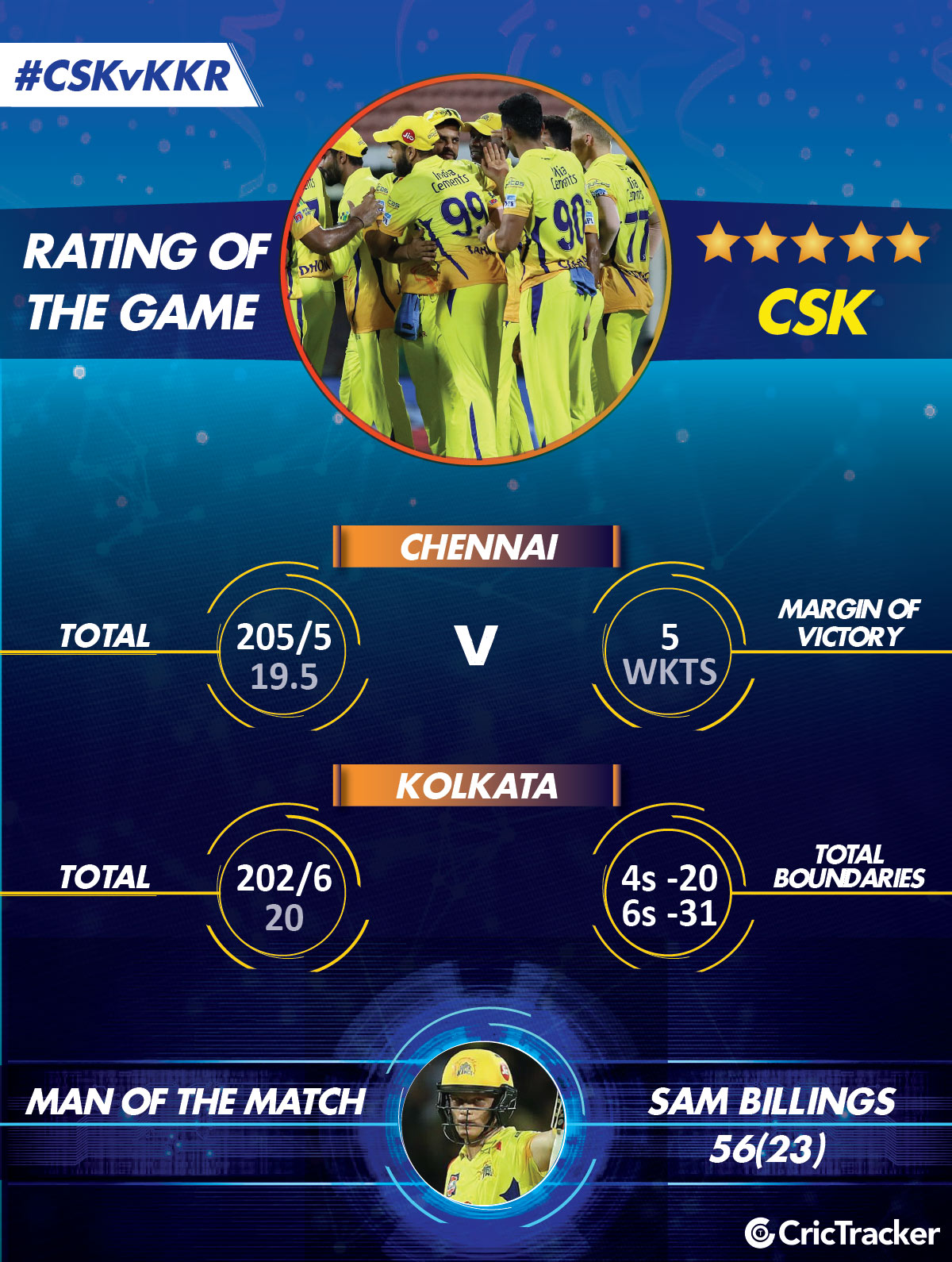