Mumbai Indians once again showed their amazing ability to turn things in their favour towards the end of the season as they pulled out a 3-run win over the Kings XI Punjab in a do-or-die match. The home team got off to a quick start before losing wickets in a heap. However, Kieron Pollard’s 22-ball fifty in his comeback match put MI back on top before a poor ending act saw them finish with 186/8. KL Rahul once again carried the burden of the team but couldn’t see them through when 42 runs were needed in the final four overs with nine wickets in hand.

KL Rahul continued his glorious season scoring a 60-ball 94 in an important match. He hit ten fours and three sixes during his innings and shared a 109-run partnership for the 2nd wicket with Aaron Finch. Despite ending up on the losing side, Rahul was the Most Valuable Player of the match according to the CricTracker’s Player Value algorithm. The inning earned him a value of 1.07 crores for his match performance. Manoj Tiwary, who got to face only one ball when they needed eight runs to win, turned out to be the unfortunate Liable Player. 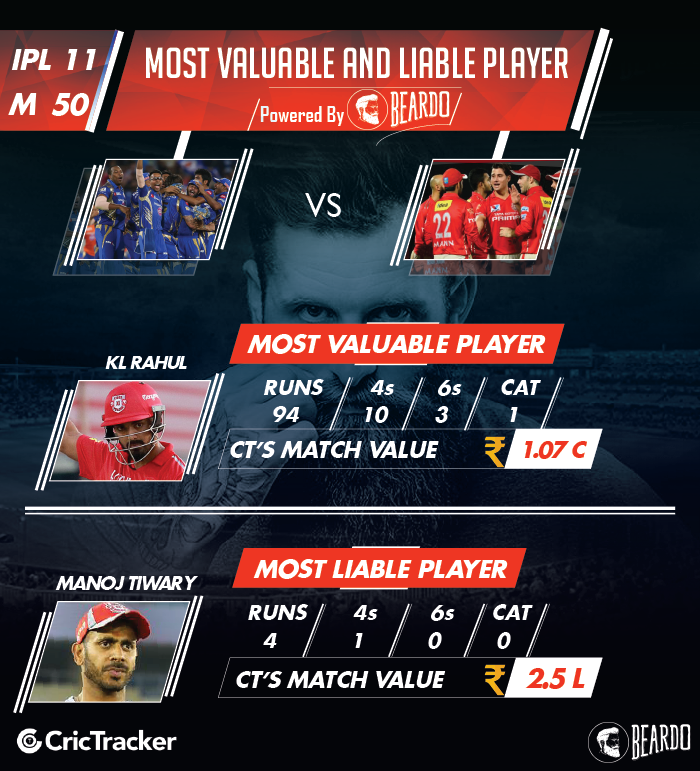 It was Jasprit Bumrah who turned the game around for Mumbai Indians and was rightly their Most Valuable Player of the match for his side. His figures of 3/15 in the game were valued at 71 lakhs which can be considered too less given the match situation from where he pulled off a splendid effort.

Kieron Pollard was benched by MI after his poor show in the initial few matches but brought out his best when his team needed it the most. His fifty was valued at 55.5 lakhs which is the 2nd best value among MI players in this game. Rohit Sharma once again failed to make it count scoring only six runs and was Liable Player for his team. 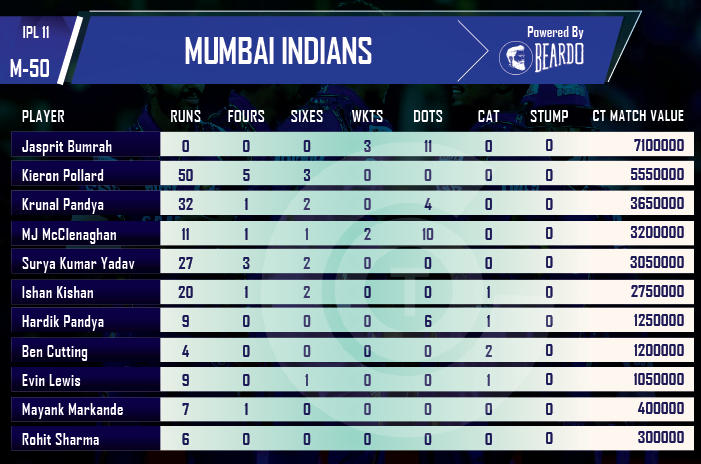 Andrew Tye bagged his 3rd 4-wicket haul this season but his team ended up on losing side in all the three matches. He returned with figures of 4/15 and earned a value of 95 lakhs which is 2nd best among the 22 players in this match. Aaron Finch played a crucial hand scoring a 35-ball 46 that kept Kings XI Punjab going in the chase. The Australian earned a value of 53.5 lakhs for his knock. 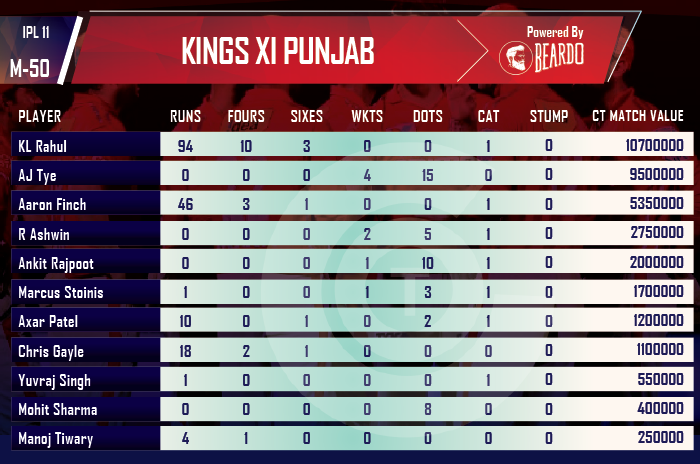