The Challengers are seemingly on a roll, but is it too little too late?

As we have entered the last week of the preliminary round of the Indian Premier League (IPL) 2018, each and every match has become vital in terms of deciding the fate of the teams. Tomorrow we have another such game on our hands as the table toppers Sunrisers Hyderabad lock horns with the Royal Challengers Bangalore who, after making a slow start in the tournament, have suddenly gained speed to put themselves back in contention for the playoffs.

While it’s an eliminator from RCB’s point of view as a defeat would end all playoff hopes, it does not hold the same importance for Hyderabad. They have not only guaranteed a spot in the next round already, they are also guaranteed to finish in top 2 in the table which means they will have two opportunities in the playoffs and not just one. The result of this game won’t affect their position any bit.

Chinnaswamy has turned more than any other pitch this IPL. It has turned square in all the games and if it does so tomorrow as well, it might be mid to low scoring game considering the quality of spinners both sides have at their disposal.

While the amount of spin in the pitch tilts the conditions in favour of the bowlers, the good thing for the batsmen at this venue is the dimensions and the altitude of the ground. Not only it’s short in terms of distance, but it’s also very high in terms of its location above the sea level which is why the ball flies a little further here than usual.

Since things have gone as per plan for RCB of late, they won’t be too keen on tinkering with their combination. Virat Kohli opened last game and that’s probably the position he will continue batting till the end of the tournament, rightly so as most of his top performances in the IPL have come batting at that slot.

Kohli opening the batting also gives RCB’s line-up the right balance as de Villiers in that scenario can bat 3, while Mandeep and Sarafarz form the rest of the middle order with de Grandhomme and Moeen being the finishers.

Alex Hales hasn’t proven to be as explosive for Hyderabad as they were expecting him to be and they would probably be looking to try out another overseas option ahead of the playoffs. They might pair up Shreevats Goswami as Shikhar Dhawan’s opening partner and bring Carlos Brathwaite in as the hard-hitting all-rounder at no. 7.

Bhuvneshwar Kumar has had a tough time in the last couple of games. He is probably carrying a niggle somewhere as he doesn’t appear to be bowling at his 100%. Hyderabad might contemplate resting him so that he can freshen himself up for the more important games coming up and in that case, Basil Thampi might replace him in the XI.

Momentum is a key in T20 cricket and RCB find themselves at the right side of it at this crunch stage of the competition, but they can’t afford to let the guard down coming into this massive encounter. The intensity should be right up.

The good thing for RCB is their bowling unit which has made drastic improvements in the recent weeks and is now all of a sudden looking pretty settled. Their middle order batting is however still a bit of a shortcoming and they will be keen for the Mandeep-Sarfaraz duo to come good tomorrow.

Hyderabad have never had any issues with the ball right through the tournament. One of the areas of concern for them was their top order which also seems sorted now with Shikhar Dhawan back in form and Kane Williamson being ever so consistent.

The only real chink in the visitors’ armoury is the lack of a lower order finisher. Carlos Brathwaite might be the answer to that. The Hyderabad fans will be excited to see how the big West Indian goes.

The prediction is for the Sunrisers Hyderabad to beat the Royal Challengers Bangalore in this match. 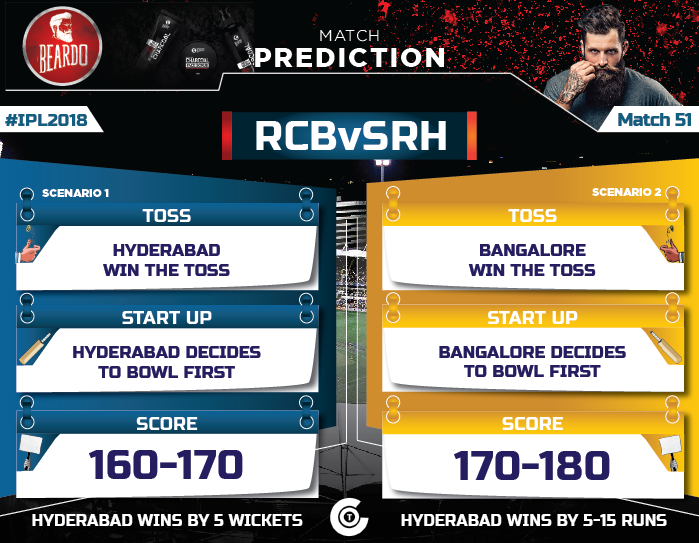