The wooden spoon holders Daredevils got the chance to knock the defending champions out of the tournament.

Delhi Daredevils might have finished IPL 2018 at the bottom of the table but they took pride in knocking the defending champions Mumbai Indians out of the tournament. The Delhi side won the close game by 11 runs in a thriller at the Feroz Shah Kotla two days after they surprised the Chennai Super Kings.

The home team finished with 174/4 on the board as Rishabh Pant scored yet another fifty. Mumbai started the chase well before their middle-order followed one another back to the pavilion courtesy of poor shots. Ben Cutting tried his best to take MI past the winning line before getting out in the final over.

Rishabh Pant scored as many as six fifty-plus scores in the IPL 2018 but only the 2nd time that came in the winning cause. He struck four fours and four sixes during his 44-ball 64 that threatened to take the game away from Mumbai. Pant was the Most Valuable Player of the match according to the CricTracker’s Player Value Algorithm as his knock was valued at 77.5 lakhs. His U19 opening partner Ishan Kishan was the Liable Player of the match finishing on the losing side. He scored only five runs before holing out to the long-on fielder off Amit Mishra. 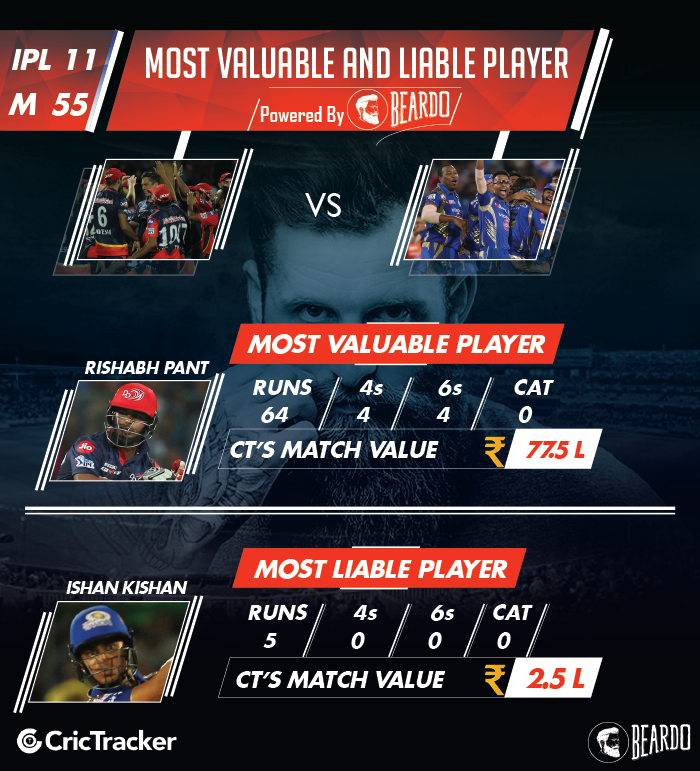 Evin Lewis was MI’s Most Valuable Player of the match as he top-scored for them with a 31-ball 48 that included three fours and four sixes. His match value of 53.5 lakhs was the 6th highest in the match with as many as five players from Daredevils earned a higher match value that Lewis. The leg-spinners Amit Mishra and Sandeep Lamichhane took 3-wicket hauls to break the back of Mumbai Indians batting which earned them a match value of 73 and 65 lakhs. Harshal Patel took the crucial wickets of Rohit Sharma and Cutting earning a value of 63 lakhs. 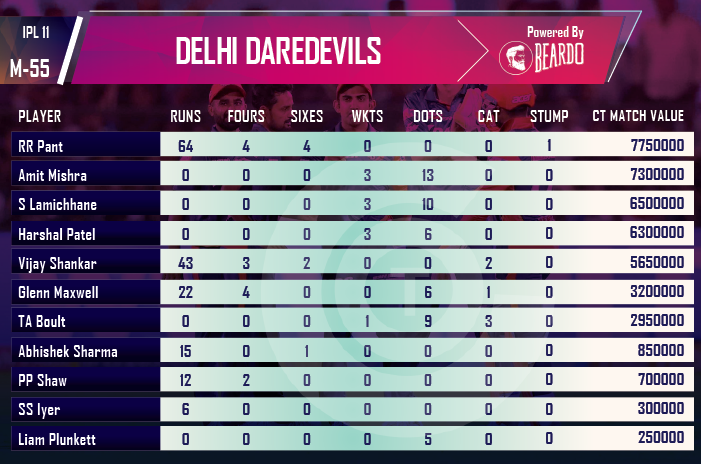 Both Harshal and Lamichhane were bought by DD at their base prices of 20 lakhs and their match values were three times of their auction prices. Cutting was MI’s last hope with a couple of boundaries but failed to finish the game. He scored a 20-ball 37 with a couple of fours and three sixes that earned him a value of 43.5 lakhs. Vijay Shankar scored a crucial 30-ball 43 for DD that help them finish with 170+. His match performances were valued at 56.5 lakhs as per the CT’s algorithm. 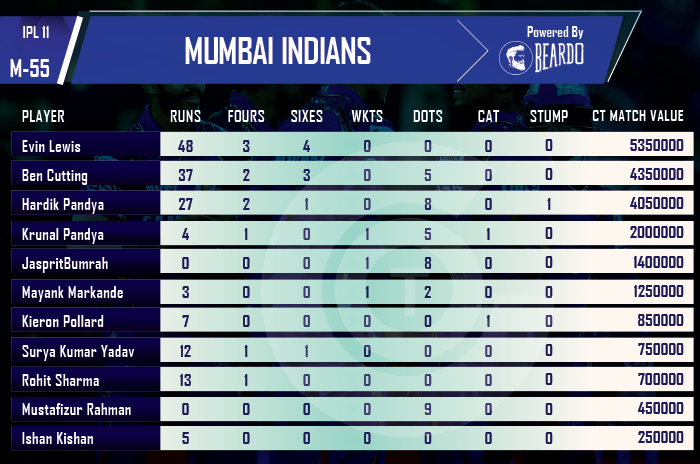