On paper, CSK is a better team as they have a lot of in-form players doing the job for them at different positions. The same can’t be said about Kings XI Punjab.

The Kings XI Punjab’s campaign in this Indian Premier League (IPL) has been the most interesting among all teams. Having secured 10 points from the first 6 games, they were absolutely cruising towards the playoffs and then all of a sudden derailed to the extent that they now require a massive win in their last group game to give themselves any chance of playoff qualification.

Punjab’s opponent is Chennai Super Kings, one of the strongest teams in the tournament and should most likely enter the playoffs among the top 2. However, if KKR wins against the Sunirsers Hyderabad by a decent margin, CSK might have to make sure they beat Punjab to achieve the no. 2 slot which gives this game a bit of a relevance from their perspective as well.

Pune has overall been a flat track this season. It has been slightly on the slower side like most of the Indian pitches, but the ball hasn’t quite stuck into the surface on a consistent basis. The spinners have struggled to contain the batsmen at this venue and so have the fast bowlers and it should continue to be the case tomorrow as well. Because of the surface being batting friendly, defending the score is a tough job here and thus both captains will be looking to bowl first.

Sam Billings has had plenty of chances in the middle order and it has been time and again proven that he is not ideally suited to the slow conditions. When the ball gets softer and the spinners start getting grip off the deck, he has no idea how to deal with it. The English right-hander has got out playing across the line to the turning ball way too often and it’s hard to see him being persisted with in the CSK XI.

CSK must have a domestic batsman at no. 4 who can milk the spin bowling with expertise in the middle overs and Ambati Rayudu fits that bill perfectly. Although he has been doing wonderfully well at the top of the order, CSK at the moment needs him more at 4 and in that scenario, David Willey needs to open the batting with Shane Watson.

Punjab in the last game against Mumbai sent Axar Patel ahead of Yuvraj Singh while a stiff chase was on which was a clear indication of the fact that the management does not trust his form at all and if that’s the case, there is no point picking him in the XI. Punjab will be better off going back to Karun Nair who will provide them some sort of solidity to the middle order.

Mujeeb Zadran is a certainty in the XI and with him, it’s just a matter of passing the fitness test. If he proves his fitness ahead of the game, there will be no question mark over his selection in place of Marcus Stoinis who has been very clumsy with the bat in the recent games.

On paper, CSK is a better team as they have a lot of in-form players doing the job for them at different positions. The same can’t be said about Kings XI Punjab a team that has substantially held both orange and purple caps with KL Rahul and Andrew Tye in the race for runs and the wickets respectively. But it is due to the lack of effort from other players, their consistency as a unit has suffered.

If the middle order stands up for the visitors and the bowlers perform collectively, they might give CSK a run for their money. MS Dhoni’s side also has some loopholes to fill, one of which is death bowling. Dwayne Bravo has gone for runs in almost every game bowling in the death and it will be interesting to see who Dhoni uses in the latter part of the innings as he will want to try out various options ahead of the playoffs.

The prediction is for the Chennai Super Kings to beat the Kings XI Punjab in this match. 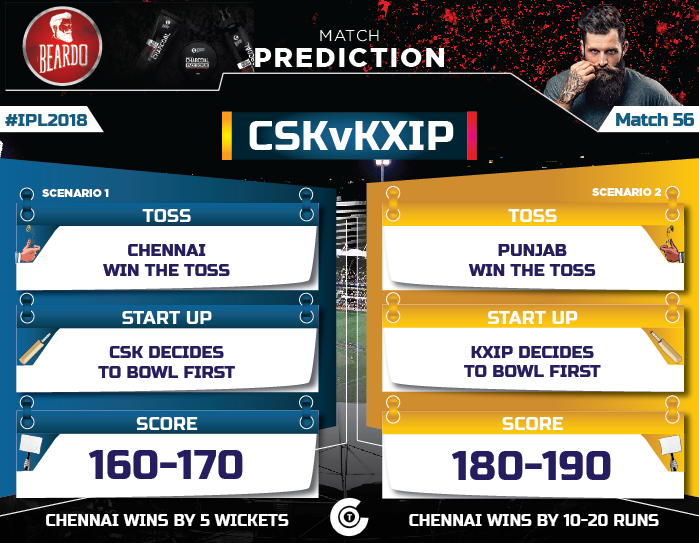