Ravichandran Ashwin will be looking to claim Virat Kohli's wicket for the first time in the IPL.

Royal Challengers Bangalore led by Virat Kohli banks on the home fixture to register their first win of the season after they lost to Kolkata Knight Riders. RCB will now face Kings XI Punjab, filled with former RCB players and Karnataka players who are well aware of the conditions in Bangalore. The pitch at the M. Chinnaswamy Stadium is set to produce batting tracks once again. With both sides filled up with big hitters, the game could well witness some record-breaking efforts.

RCB put on a mediocre batting performance in the first game despite some quick innings from Brendon McCullum, AB de Villiers and Mandeep Singh in different phases. Their skipper Virat Kohli failed to get going as he crawled to a 33-ball 31. The home team will hope that their captain comes on top when he faces the Kings XI Punjab‘s attack. The visitors’ bowling attack consists of their captain Ravichandran Ashwin and Mujeeb ur Rahman who were successful in their opening game.

Virat Kohli vs Ravichandran Ashwin in the IPL: 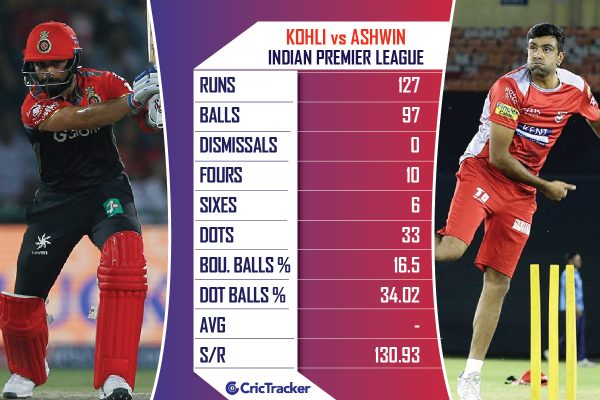 The KXIP’s new skipper Ashwin didn’t concede any boundary in the four overs he bowled in their first game against DD. Kohli, who has a good record in the IPL against his opposite number, will be hoping to unsettle Ashwin and make things easier for his batsmen. Virat Kohli faced 97 balls from Ashwin in the IPL and scored 127 runs without getting out even once. He hit ten fours and six sixes against the off-spinner in the league and has a dots percentage of 34.02.

Most runs by any player against Ravichandran Ashwin in the IPL: 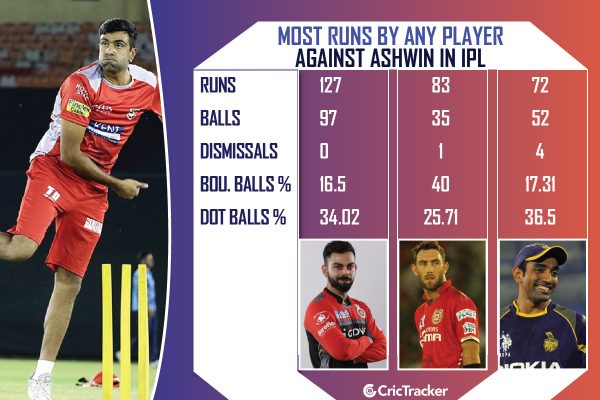 No player other than Kohli managed to score 100 runs in the IPL against Ravichandran Ashwin. The KXIP captain conceded 83 runs to Glenn Maxwell in only 35 balls and dismissed the Australian on one occasion. Robin Uthappa scored 72 off 52 balls against Ashwin but got out on four occasions at the same time.