The Challengers have lost their last five matches in the Chinnaswamy.

The Royal Challengers Bangalore had a horrible IPL 10 as they finished 8th in the table winning just 3 out of their 14 games. However having assembled a new squad in the auction in January, they entered IPL 11 with massive hopes and the anticipation of starting the tournament on a high. But their first game didn’t go according to the plan at all as they suffered a comprehensive defeat at the hands of the Kolkata Knight Riders at Eden Gardens.

The Kings XI Punjab, on the opposite, had a winning start to the competition as things fell perfectly in place for them the other evening against their North Indian rivals Delhi Daredevils. However, they have a real challenge at their hands now as they make their way to the M Chinnaswamy Stadium to face RCB in their backyard.

Chinnaswamy was a low and slow, sluggish kind of a deck all through IPL 10 and it was one of the reasons why RCB struggled so much. Since this venue has traditionally been a flat surface where the ball comes on nice and easy and playing strokes on the rise is possible, RCB had built their squad keeping that in mind. But the nature of the surface they came across was drastically different and it didn’t help them at all.

However, there is a word around that the Chinnaswamy deck is back to normal and there couldn’t be any better news for RCB. Most of the batsmen they have at their disposal don’t like the ball sticking and gripping the surface which was happening quite a lot last season. If it’s a true surface where the bounce is trustable, it will favor their style of batting.

A good pitch makes Chinnaswamy a bowler’s nightmare because the conditions are totally batting friendly otherwise. Not only is it a very small ground, it’s also situated 3000 ft. above the sea level which makes the ball fly as the density of air is significantly lesser. Also with dew falling later, controlling the lengths will be near impossible for the bowlers in the second innings which means none of the captains will want to bowl second if they win the toss.

RCB’s four overseas players against KKR were Quinton de Kock, Brendon McCullum, AB de Villiers and Chris Woakes. While the latter three are certain to play this game too, de Kock’s place is under the scanner. RCB might want to replace him with the New Zealand all-rounder Colin de Grandhomme who gives them a strike force down the order, something which was lacking in the combination they played last game. If de Grandhomme is slotted in the middle order, Sarfaraz Khan will sit out.

Also, de Kock’s replacement at the opening slot will be Parthiv Patel who will don the gloves as well, in the absence of the South Africa international. Parthiv was really successful batting up top for his previous franchise Mumbai Indians and RCB will also expect a flyer of a start from him. The left-hander will have the license on the power-play and he will try and make the most of the fielding restrictions.

Ravichandran Ashwin made a surprise selection of Mujeeb Zadran last game and the Afghanistan mystery spinner didn’t let his captain down as he delivered a mighty impressive spell in his very first outing in the IPL. The 17-year old removed two of the opposition key batsmen, Colin Munro and Rishabh Pant, with some wonderful piece of crafty bowling. It’s unlikely the Punjab management will think of dropping him after that kind of performance.

Mayank Agarwal had a failure last game, but he has churned out runs in all formats of the game this domestic season and he deserves another opportunity which he will get. Given the credentials he possesses and the form he has been in recently, Ashwin will back him and he will probably open the batting again with KL Rahul.

The firepower in RCB’s batting is there for everyone to see. The likes of Brendon McCullum, Virat Kohli, and AB de Villiers form a scary combination with the bat, but their bowling, as usual, is not the strongest. They indeed have got a couple of good international names in Chris Woakes and Umesh Yadav, but both of them are preferably the test match bowlers and they often bowl new-ball lengths which don’t really work in the shortest format, especially on pitches where the ball doesn’t nip around.

While Umesh was good at Eden, he is still not someone whom Virat Kohli can fully rely on, as far as death bowling is concerned and neither does Woakes fit that bill perfectly. A couple of good young spinners in Chahal and Washington Sundar give Virat game-breaking options in the middle overs, but the attack overall is not too promising at all.

Kings XI Punjab’s attack in comparison is a lot more versatile. While Mujeeb and Ashwin have a bag full of tricks in the spin department, the same can be said about the two fast bowlers Andrew Tye and Mohit Sharma who also have different options in their arsenal and they are reliable at any stage of the innings, particularly in the death.

The visitors have a balanced batting line-up as well. While their top 3 KL Rahul, Mayank Agarwal, and Karun Nayar bring classy stroke-play to the table, the middle order has some devastating power-hitting potential in Yuvraj Singh, David Miller, and Marcus Stoinis.

The prediction is for the Kings XI Punjab to beat the Royal Challengers Bangalore in this match. 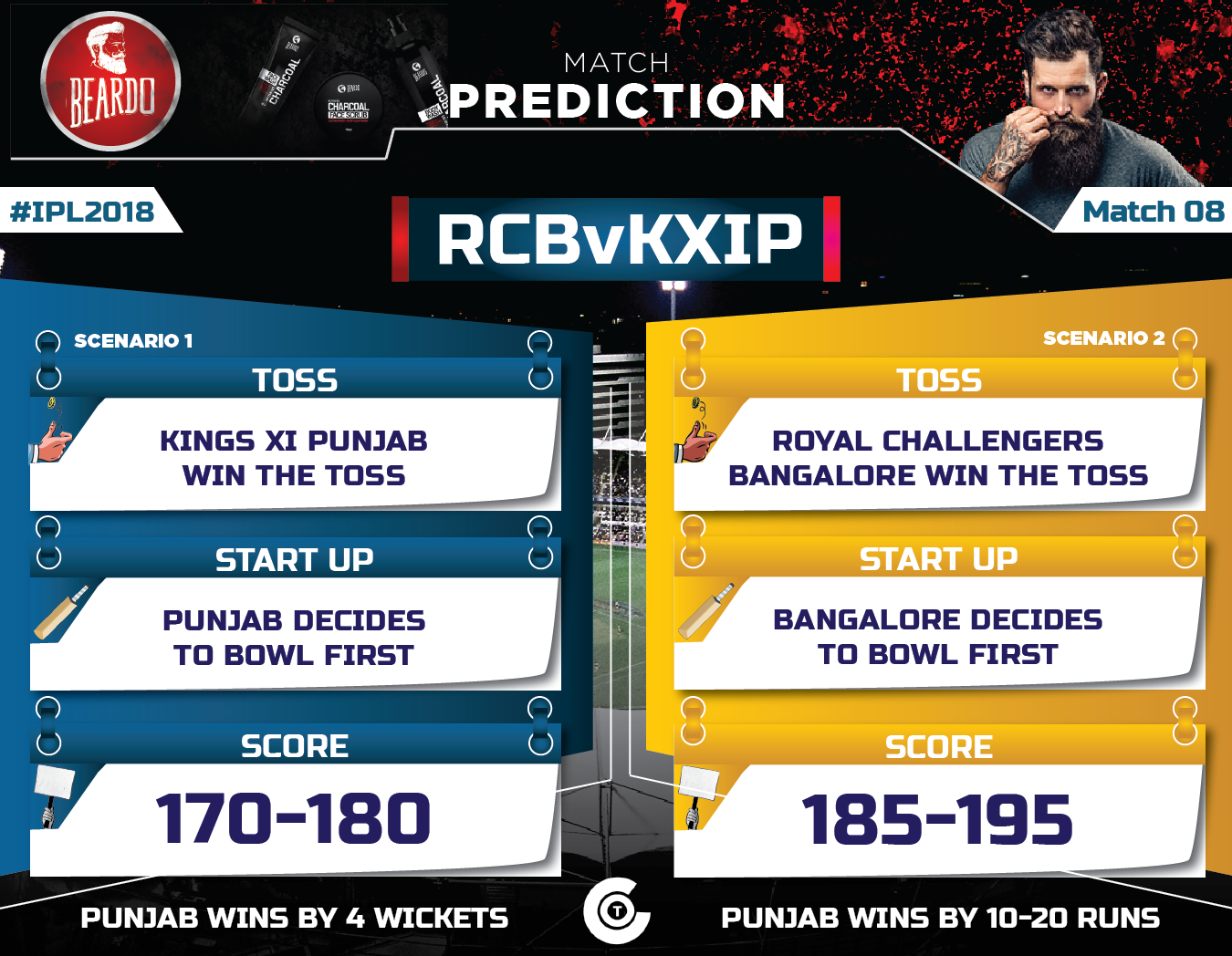