Jason Roy made a memorable debut for the Delhi Daredevils in the IPL.

The trend of losing in the last over thrillers continued for the Mumbai Indians as they went down to the Delhi Daredevils this time but by a different margin. The home side looked set to break a few batting records after they scored 84 runs in the mandatory powerplay itself. Mumbai failed to keep the momentum going finishing with only 194/7 after they scored 28 runs from the final 27 balls. The  Delhi Daredevils‘ chase was all about Jason Roy who picked his targets and helped his team to register their first win.

The England opener smashed six fours and six sixes during his 53-ball innings in which he scored 91. Roy ensured his team crossed the line by scoring the winning runs on the final ball of the match. Jason Roy earned 1.03 crores for his match-winning knock as per the CricTracker’s player value algorithm. No other player earned more than 60 lakhs from this game. Vijay Shankar didn’t make any contribution towards the game as he didn’t get a chance to bat or bowl. Kieron Pollard turned out to be the liable player of the match for the second time in three games he played. 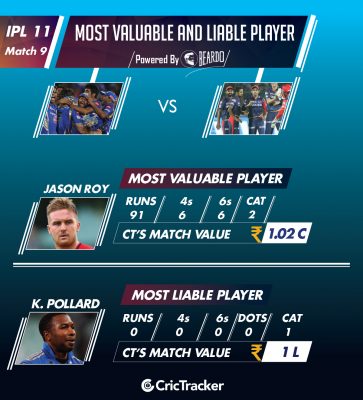 Mumbai Indians’ opener Surya Kumar Yadav justified his promotion with a quick-fire 50. Opening the batting for the first time in his T20 career, Surya scored 53 off 32 balls with seven fours and a six. His performances were valued 57.5 lakhs. The big-hitting left-handed batsmen Evin Lewis, Ishan Kishan and Rishabh Pant scored over 40 in this game and were valued at 54 lakhs, 52 lakhs and 48.5 lakhs respectively. 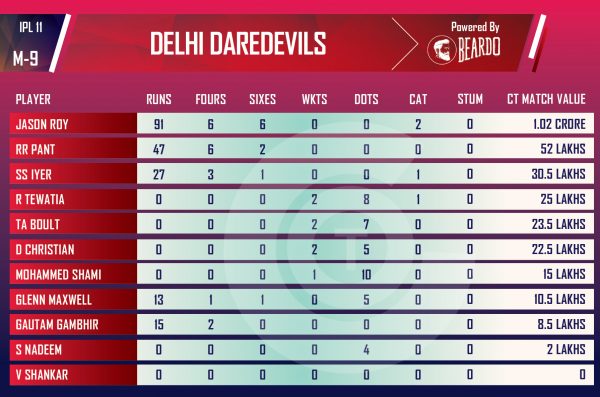 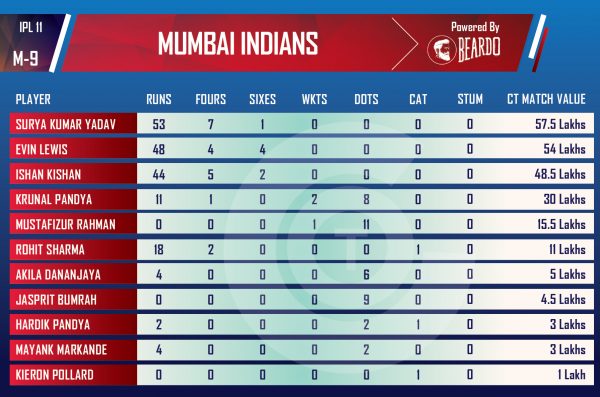