If the weather conditions remain good, we might have a slightly better surface with a bit more pace and carry and ideal for strokeplay.

The Sunrisers Hyderabad after becoming the first team to qualify for the IPL 11 playoffs have suddenly lost the plot completely and having lost 4 matches on the bounce, they now for the first time this season find themselves in a must-win situation as they go head to head against the Kolkata Knight Riders in Qualifier 2 tomorrow.

While the Sunrisers Hyderabad have gone on a downward slope in the last couple of weeks, it’s been a completely different story for the Kolkata Knight Riders who have actually won 4 in a row and are in a great frame of mind ahead of this much important encounter.

The Eden Gardens pitch in the last game had spongy sort of a bounce but was lacking pace. The ball got stuck into the surface quite a bit. It might have to do with the fact that it had been raining in Kolkata leading up to the game and the surface was damp. If the weather conditions remain good, we might have a slightly better surface with a bit more pace and carry and ideal for strokeplay.

Dinesh Karthik went for an extra spinner in Piyush Chawla for the game against Rajasthan Royals which was the correct call keeping the nature of the surface in mind and the way Chawla bowled, he in all likelihood will be picked again. KKR has their fast bowling base covered up anyway with Prasidh Krishna bowling fantastically both upfront and in the death and getting ample support from the Caribbean big gun Andre Russell.

There might be a little bit of contemplation on Javon Searles’ spot, but the fact that he gives the hosts a slightly extra security with the bat down the order at no. 8 is probably the reason why he will be able to hold onto his spot.

Carlos Brathwaite was not up to the mark with the ball last game and his poor bowling in the death cost Hyderabad dearly, but it’s hard to overlook his batting performance which dragged Hyderabad to a respectable total in the first place and put them in a position to fight.

Brathwaite should be persisted with, however, it’s unlikely that Kane Williamson will turn to him for death bowling. The Hyderabad skipper will rather want to stick with his tried and tested specialist bowlers for the much important job.

The Kolkata Knight Riders are on a roll and while that’s a good thing, it can sometimes backfire too as the teams tend to get too comfortable when everything seems to be going easy for them. KKR must avoid that complacency factor from creeping in.

Hyderabad are probably the underdogs in this game and they must thrive on it. The pressure is more on KKR as not only are they the in-form team, they are also going to play on their home turf with a huge crowd in. Hyderabad needs to make sure they remain positive with their moves and use their resources at the right time.

The biggest play of the game will be Rashid Khan bowling to Dinesh Karthik and Andre Russell. Karthik and Russell are the two players who have bailed KKR out of trouble time and again this season and if Rashid manages to remove them cheaply as he has done to many big players in this tournament, the game might just tilt in Hyderabad’s favour.

The prediction is for the Sunrisers Hyderabad to beat the Kolkata Knight Riders in this match. 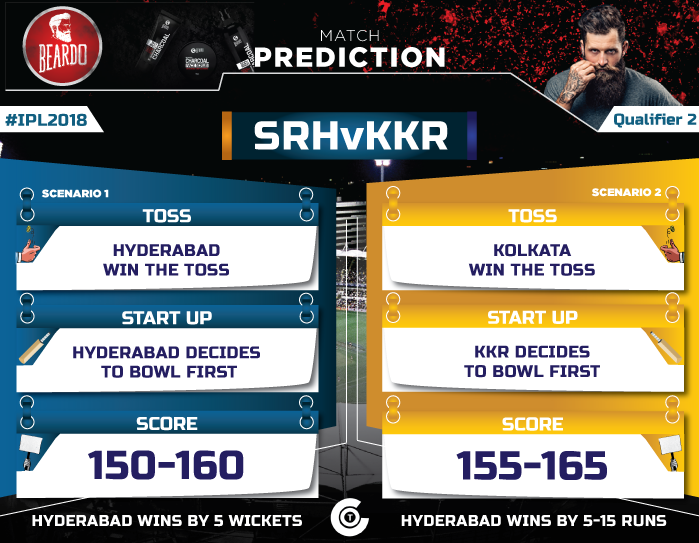