Kings XI Punjab, given they win this contest in Hyderabad, will be one step closer towards achieving a position in the playoffs.

They say quality sides somehow find a way to win games and we’ve seen Kings XI Punjab win the last game against DD in a similar way. It was Delhi Daredevils‘ game to lose and they managed to spill a golden opportunity to bring a smile on the home fans. Punjab second on the points table with 5 wins in 6 games and they now face a stern test against the Sunrisers Hyderabad.

Sunrisers recorded a mind-boggling win against the Mumbai Indians and will be keen to stop this rampant Punjab unit. KXIP’s batting unit will not make it easy for the strong SRH bowling contingent, but this will be one cracker of a game between two high-quality sides.

Kings XI Punjab, given they win this contest in Hyderabad, will be one step closer towards achieving a position in the playoffs. That will be their primary target to not complicate their situation. It will be a hard-fought contest and here’s the predicted XI of the Ashwin-led side.

The King of T20 cricket Chris Gayle was dropped in the previous game, much to the surprise of the fans. But he will replace Aaron Finch and re-enter the playing XI. He has been in outstanding form and is a pivotal member of the Kings XI Punjab.

KL Rahul is in the form of his life and it’d be fair to say this has been his best IPL season by a long distance. He is getting more responsibility in the side than he did at RCB, a factor which he seems to be relishing. One of the contenders for the Orange cap, Rahul will be a force to reckon with for SRH.

Mayank Agarwal is playing some gorgeous cricket in his short stays, but he needs to pile up one big knock to solidify his status. He had a good domestic season and will be keen to get a big score. Karun Nair has been the dark horse of this Punjab side, scoring important runs coming in the middle order almost each time without a lot of hype.

Yuvraj Singh has been in poor form with the willow and us yet to show his real worth. Everyone knows what he is capable of and if he starts hitting the ball properly, Punjab will be almost invincible. They have a potential finisher in David Miller. The South African hits the ball clean and is more often than not suitable to bat anywhere in the middle order based on the call of the hour.

Not many had seen Ashwin’s ability to lead, but the way he has been leading Punjab from the front is truly commendable. Ashwin is quite a tactician and the way he courageously decided to bat first when both these sides met at Mohali is one of the stories of the season. He’d be over the moon given they cant outsmart this SRH unit.

Andrew Tye is getting better and better as the tournament progresses. He is showing great composure and his variations are proving to be decisive. He struggled initially but is now exactly the bowler KXIP signed him to be. Ankit Rajpoot is another impressive youngster in the side, he won the Man of the match award for his heroics in Delhi making his debut for the side and will want to continue doing that.

Barinder Sran’s place is certainly in danger with the way Rajpoot is bowling. But the lad might get another game to prove himself. Mujeeb Zadran bowled the final over in the previous game and did a fabulous job to lead his side to victory. The youngster has shown great maturity and this IPL will prove to be a huge learning curve in his career. 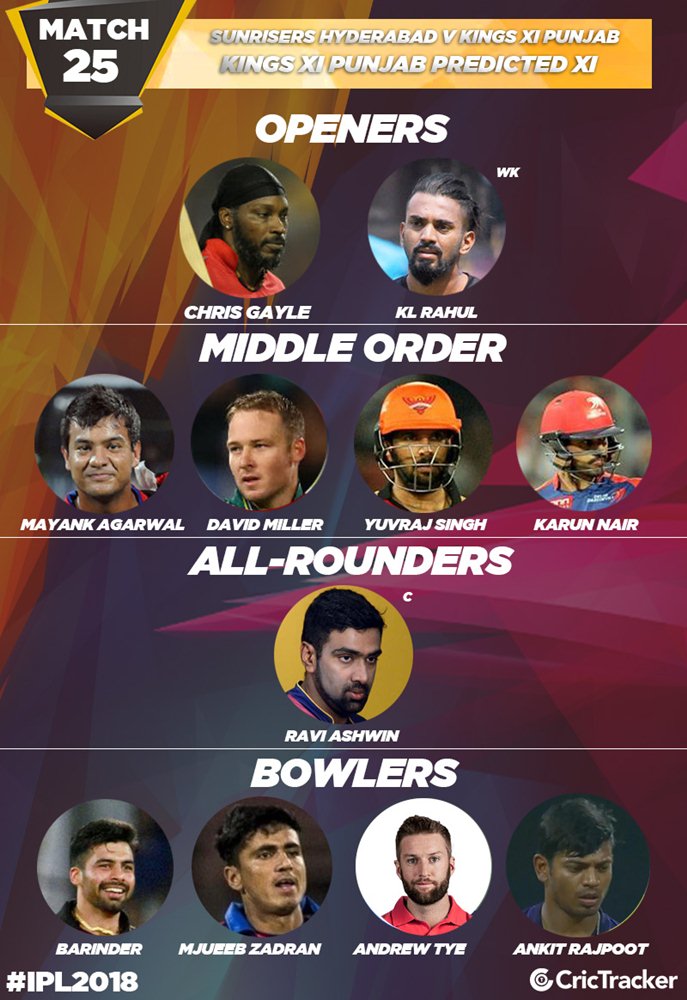